So much has happened since the last time I posted. What to make of it all? Well, it’s been a long time coming, that much I know. I do have knitting updates to share, but before I do that, I have thoughts to share, because what is happening right now in my country is much more important than knitting. 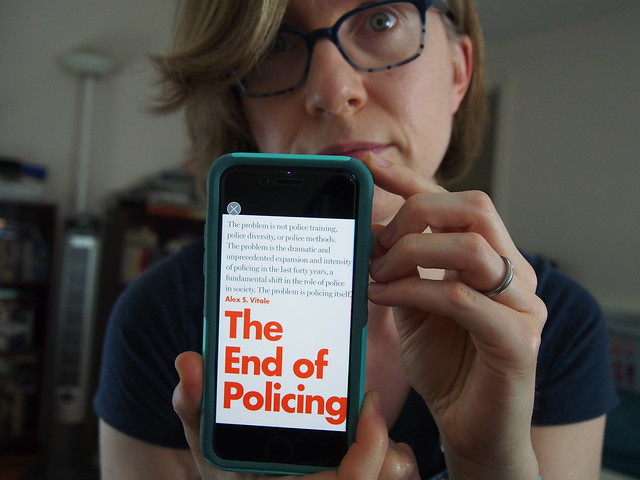 Verso has made this free to download as an e-book. Please join me in reading it and thinking about how we can change the world for the better!

When armed white men can show up at the governor’s house in KY and face zero consequences, while unarmed black men are inherently viewed as threats and murdered by cops or wannabe-cops, that’s racism. When our country vilifies Colin Kaepernick for kneeling on the football field while ignoring the violence he was protesting, and cops kneel on black men’s necks without a care, that’s racism. And none of us who grew up in this country are immune to the biases that lead to viewing black men as inherently threatening. Racism is baked into our country’s DNA. It’s in the water we drink and the air we breathe. I mean that metaphorically as well as literally: we don’t notice or care when black communities can’t drink their water because it’s full of lead, or can’t breathe their air because it’s too polluted. Until it starts hurting white folks, we just ignore it or pretend those who suffer deserve their fates. Oh, sure, not ALL of us; some of us have been paying attention for a very long time. But all of us can get away with ignoring the problems.

Or at least, we could. But not now, I think. Not anymore. That is one of the things that the protests are doing: making visible what we might have wanted to pretend didn’t exist. Disrupting the status quo. And loudly, forcefully declaring that this state of affairs cannot continue existing unquestioned. That it cannot continue existing, period. Is it unfortunate that things have been set on fire, and property has been damaged? Sure. But if you find yourself thinking, “Gosh, it’s a shame that George Floyd was killed, but the rioting and property-damage needs to stop!”, PLEASE, PLEASE stop. Think about it. Recognize that what you are doing is a kind of tone-policing. Then flip that sentence around and get your priorities straight: sure, it’s a shame that property is getting damaged, but what actually needs to stop is the killing of black people by police (and others). How can we be surprised that people are protesting when our country is failing black people, not just in terms of protecting them from police brutality but also in terms of the disproportionate impact of the coronavirus pandemic? (This is a connection that is beautifully and powerfully made in an essay by Keeanga-Yamahtta Taylor.) Our country, in fact, is veering into authoritarianism. We’ve now watched, horrified, as our president cleared a path through peaceful protestors, before the start of the curfew that had been imposed, with rubber bullets and tear gas, just for a photo-op (holding a Bible as only someone who never engages with books of any kind would do) in front of a church whose parishioners were among those protestors, after promising to use the military against protestors in cities throughout the country and pointedly reminding his white nationalist followers of their “second amendment rights.” That this all happening in the midst of a pandemic is even more horrifying. We have an incompetent madman at the wheel when we desperately need competent leadership.

Yes, things have gotten very messy, but let’s be clear-eyed: the escalation is coming from the *police* (and from our president), not from the protestors. This is something I’ve been talking about with my daughter, who knows about escalation and de-escalation in terms of how we approach parenting when she’s getting overwhelmed and frustrated: we try to de-escalate by doing things like talking in calm voices (if at all), using really gentle touch or a weighted blanket, and coaching her through deep breathing, and usually that helps her calm down. That’s de-escalation. But if we instead lose our temper and yell at her (which does happen sometimes…we’re human!), that just escalates things…it makes her get more and more upset and things can get really bad. That’s escalation – and for cops, that looks like military gear, tear gas, and rubber bullets. It looks like arresting journalists, or taking out their left eye with a rubber bullet, as happened to the journalist Linda Tirado, who wrote a powerful article about it. It looks like the blatant lies about people who “tripped and fell” when video clearly shows who was pushing them, punching them, beating them with sticks…being lied to about what your own eyes are showing you is gaslighting, and I can’t speak for how anyone else experiences it, but when I recognize someone trying to gaslight me, it enrages me and makes me want to burn it all down.

It’s the responsibility of people who are in a position of power to learn to de-escalate. But that is NOT what police officers learn to do in their training, and black communities, neurodivergent folks, deaf folks, and so many others pay a very high price for that. But Alex Vitale is right: you’re not going to undo the effects of “warrior training” with a few workshops on bias and de-escalation. And frankly, even if officers haven’t gone through “warrior training”, I’m not sure you’re going to override the mindset of the type of person to whom our current system of policing appeals as a career. I’m not saying that everyone who goes into policing is an abusive monster. I know that isn’t true. But if you *are* an abusive monster and you want a job where you can be that way with impunity, our current system of policing is the perfect home for you. We need to change that. Defund the police and send those resources instead to community-based programs that address the needs that currently aren’t met. Demilitarize them, too. And hold them as accountable for their bad actions as anyone in any other job would be for theirs (to start, here in NY, let’s repeal 50-A). Let’s stop making police work a haven for abusers (literally), and let’s stop making it our only tool for addressing issues our communities face. And if the words “defund police” are alarming to you, read this article explaining what people mean when they say that, and then consider that we’ve been defunding public schools ever since I was a kid. Maybe we should demand that our budgets reflect our values and priorities? We ask both police AND teachers to do too much, but only one of those groups keeps getting more and more money and equipment poured into their coffers. And it isn’t the teachers. 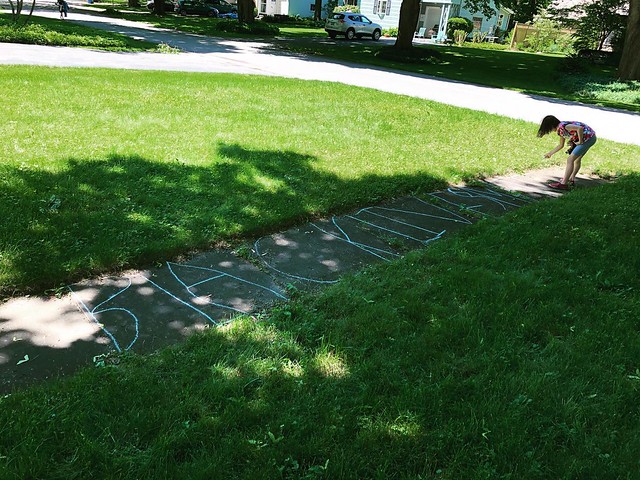 “Black Lives Matter”. Her spacing/kerning could use some work, but I’m glad she is growing up internalizing this message and wanting to share it.

Towards the beginning of all of this, I saw someone say something about the hatred required in order for that cop to murder George Floyd, but I think that “hatred” is the wrong framing. It strikes me as being more of a complete lack of concern…not so much active hatred as just not even viewing black lives as ones that matter. Viewing them as disposable. As ones over which white lives should have unquestioned power. I think when we frame it as “hatred”, it’s easy to write ourselves out of the picture. WE don’t hate, after all. But we sure as hell grew up drinking from the poisoned well of this country’s racist history.

White friends, we have to do so much better. For George Floyd, for Ahmaud Arbery, for Tony McDade, for Breonna Taylor…and the list of names could go on for pages. We have to expand what we mean by “we” until we remember that every single person has inherent worth and dignity. Until we remember that black lives MATTER, and they matter BECAUSE all lives matter; that second phrase, which so often gets used to shut down conversation, is an aspiration that we can only make real if we make black lives matter. And that means having hard conversations with your friends and family members who unquestioningly accept the stories about who “deserves” to suffer or about who is “suspicious”, and it means pushing back when they try to explain why something isn’t *actually* racist. It means educating ourselves and each other on the history that is shaping all of our lives today, and thinking about how we can begin to build a new system. It means a hell of a lot of unlearning. It means teaching our kids the truth about our white supremacist culture. But it also means shutting up and listening when black folks are telling us what they’re experiencing, and what needs to be done to address it. It means amplifying those voices over our own whenever we have the opportunity, until we have a world in which black lives are fully included in those that count, get listened to, get heard, get believed.

I saw someone say, somewhere on social media, that people love to imagine they’d have been abolitionists, but they need only look at what they’re doing right now to know what they would have been doing then. As for me? It seems clear I would have been one of those folks writing long-winded letters about justice, and not so much someone on the front lines, with my newly re-injured shoulder and immune-compromised body. So be it. I’m a thinker, a planner, a teacher, and a writer, and I do think those can be important contributions. But I’m very grateful to everyone who is putting their bodies on the line in these protests, and support them with all my might. As I’ve said before, though, I do think we need to be careful about the inferences we draw about where people are and are not showing up, and especially about the demands we make regarding how people participate on social media; issues of ableism, tokenism, and performativity are things we should keep in mind when we think about how others are participating. Just do the work, however you can.

This post has gotten long enough, but I’ll close with one knitting photo, as a “reward” for all who read the entire thing: 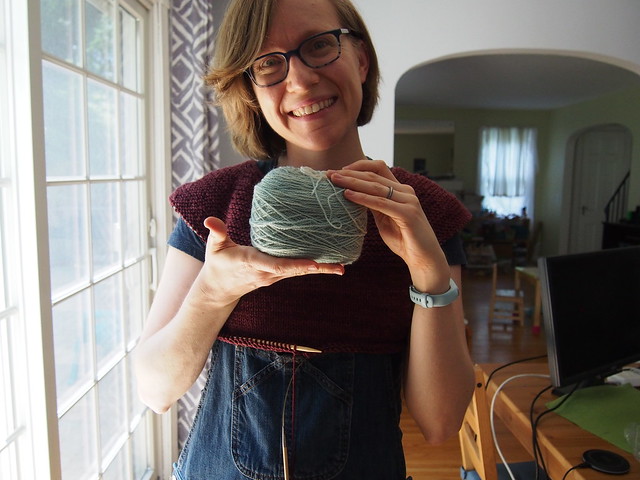 I’m trying on my newest sweater, while holding the yarn sent by a kind stranger on Ravelry so that I can make full-length sleeves on Honeydew.