I had some bright green Cascade 220 Superwash leftover from my Tric cardigan, and I had an idea: I always need knee-high socks to wear over my tights in the winter, so that my tall boots don’t shred the tights. I also like having a pop of color that coordinates with my outfit, but finding knee-high socks in the right colors is hard! But if I can make little boot-topper/legwarmer type thingies out of my leftover sweater yarn, then I can have those coordinating pops of color easily! (I mentioned this idea in this post, awhile back.) 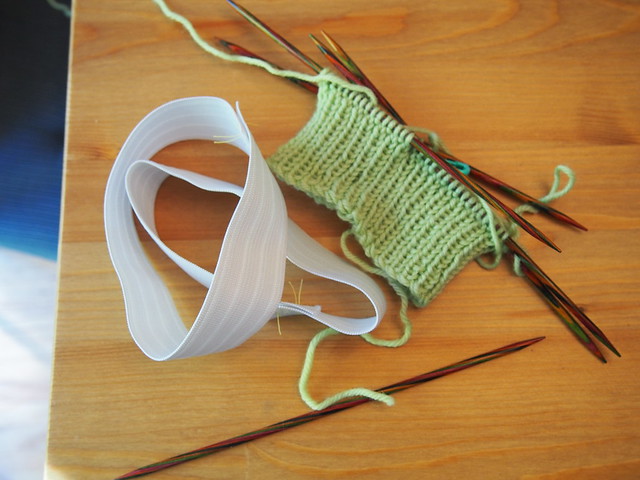 So, what I did was cast on 64 stitches using the backwards loop cast-on – this is not the cast-on that I would normally use for 1×1 rib, but I had a reason: I like the loops that the backwards loop cast-on creates for creating folded hems; they’re really easy to pick up and knit with the stitches on the needle. But before I knit the hem together, I sewed up a ring of sport elastic, and held it between the layers: 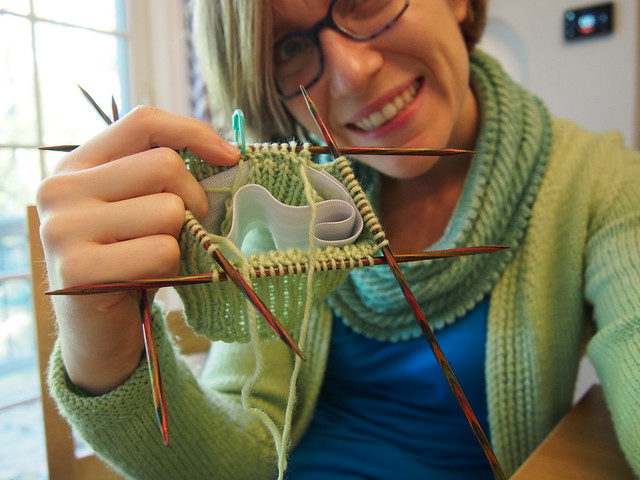 I actually made a YouTube video to show what I was doing – it’s not great, both because the camera didn’t want to focus very well, and because my kiddo interrupted a few times, but I’ll share it here in case it’s useful:

Now that I’ve got the elastic knit into the folded ribbed hem, I’m switching to brioche rib, and I’ll knit the main part of the legwarmer in brioche, decreasing a few times as I get further down, before ending with plain 1×1 rib. If this plan works, I’ve got lots of single skeins of worsted weight that I’ll be turning into legwarmers!