Whew, what a whirlwind these last few weeks have been – the start of a new semester, followed by my daughter’s first day of second grade, plus a whole lot of evening workshops that I needed to run…it’s been a lot! But even though I’ve been too busy to make much happen on the crafty front, I do have a few new things to report. First of all, we finally set up my new sewing machine down in the basement! 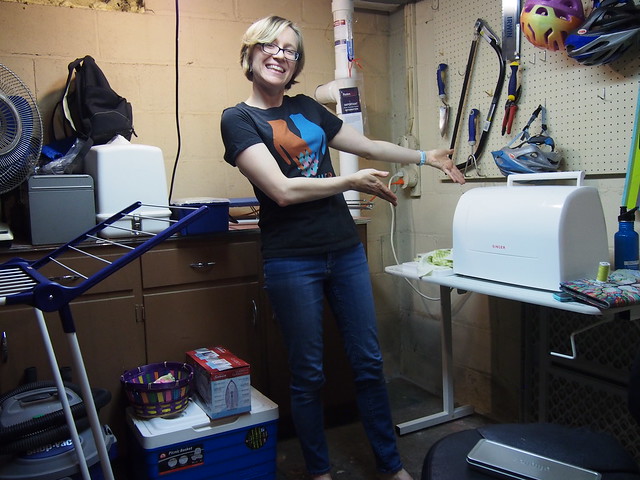 Not the most beautiful sewing space, but it works!

Over Labor Day weekend, I attempted to sew my very first project on the machine: a Strata Top with some double gauze that’s been hanging out in my (very small) fabric stash for quite a long time. 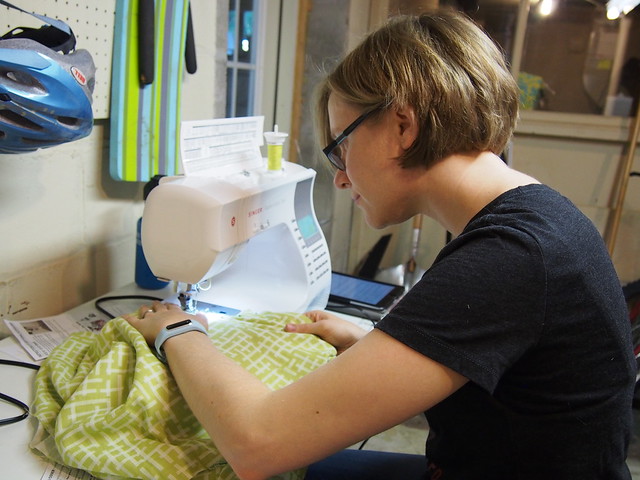 My new sewing machine (a Singer Quantum Stylist 9960, which I got for half price!!) is an absolute DREAM to sew with. I had thought that maybe sewing just wasn’t for me, because with my old machine, it nearly always ended in tears of frustration. But this machine? 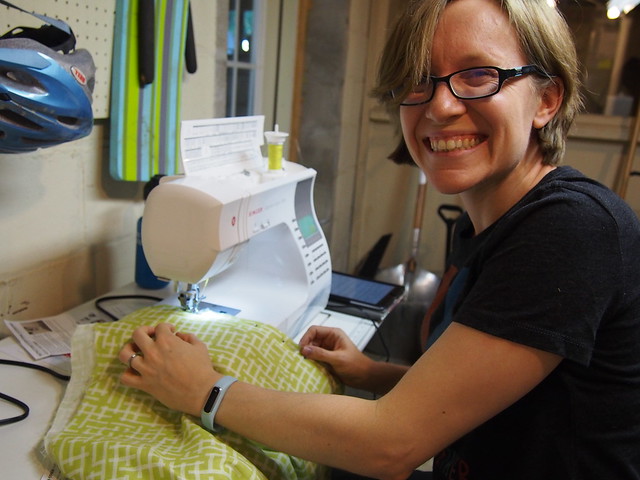 No tears, just smiles!! I do still have quite a bit to learn about sewing, though; I really screwed up trying to sew the sleeve hems, so I ripped those out, and then when I was doing that, realized that in attempting to create french seams, I’d inadvertently eaten up WAY more than I was supposed to in the seam allowances at the top of the shoulders. Here’s what the partially-finished top looks like on me: 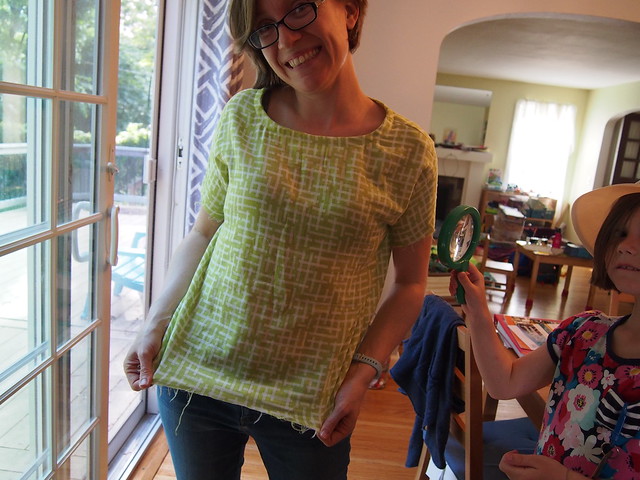 It’s maybe a bit hard to tell, but even if I *can* get the sleeves hemmed properly, the sleeves are going to be too snug; I needed that extra material at the top of the shoulder! I might try to rip things back, but given how many layers of stitches are there (e.g. the neck facing), and how fragile the double gauze is (it was hard enough to rip out the attempted sleeve hem without tearing it), I may need to just accept that this one didn’t work out. I might try something a little simpler next. I mean, I know the Strata Top is a “simple” pattern, but it’s so simple that the instructions are quite minimal, and I’m not experienced enough to roll with that..at least on something that is supposed to fit me in the end!

In these last few weeks, the only thing I’ve consistently made time for every day (other than my teaching and parenting responsibilities) is violin practice. Inspired by Hilary Hahn, I decided to start my own “100 days of practice” challenge, and I’m now on day 28! (If you follow me on Instagram, you’ll see that I’ve been sharing a 1-minute long video excerpt from every practice session!) 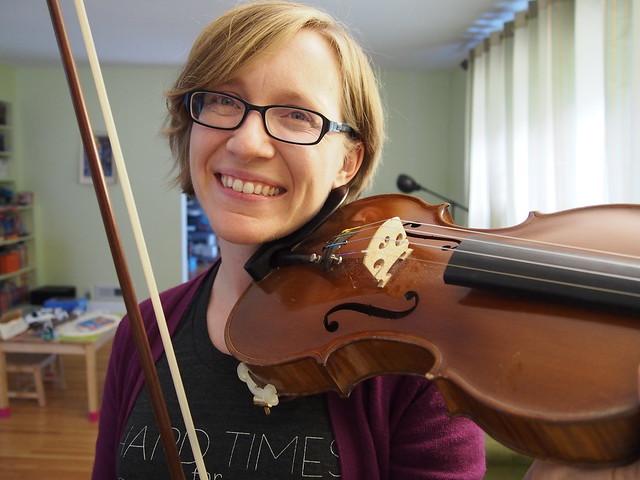 It has been so rewarding to hold myself to making sure I do at least a little bit of practice every day. Challenging, too – I often end up practicing in the basement (right next to my sewing machine!) with the heavy practice mute after my daughter’s in bed. It’s also just a lot of fun! And I think what I’m getting from it is something that knitting has taught me well – I can’t expect to finish a project in a single sitting, but if I keep at it, sometimes just a row or two a day, eventually I will finish the project. And the same is true with practice – I can’t play the piece I’m working on right now (the Chaconne, from Bach’s d-minor Partita) all the way through, and it’s not even reasonable to expect myself to be able to do that, but if I chip away at small sections of it, with consistent practice, I really CAN learn it! 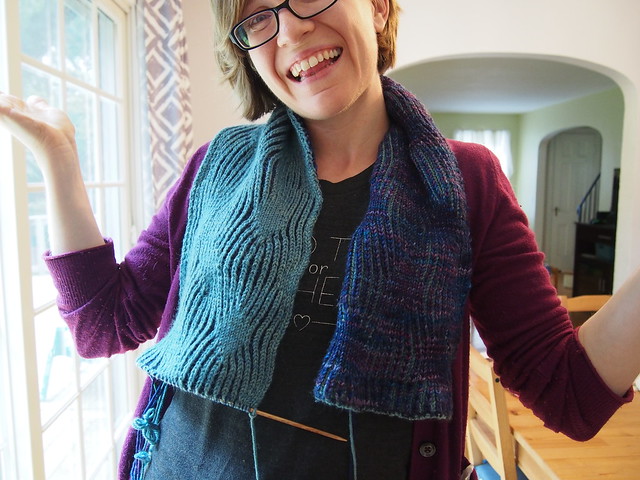 Speaking of chipping away at things piece by piece, or row by row, look how long my brioche scarf is getting! I’ve been knitting a row or two in the car on the way into work (I’m not the driver!) and occasionally I can even sneak in a row while my students are doing some in-class writing or group work! And look, it’s long enough now that I can even knit it while wearing it! 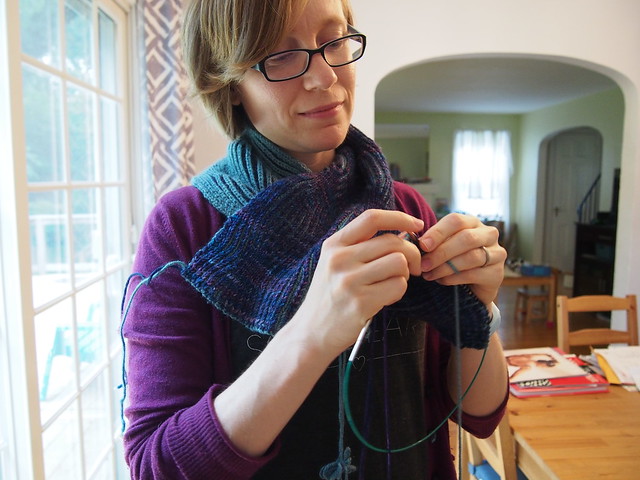 This is going to be such a warm and a delightfully squishy scarf – and so pretty, too! Happy September, everyone! 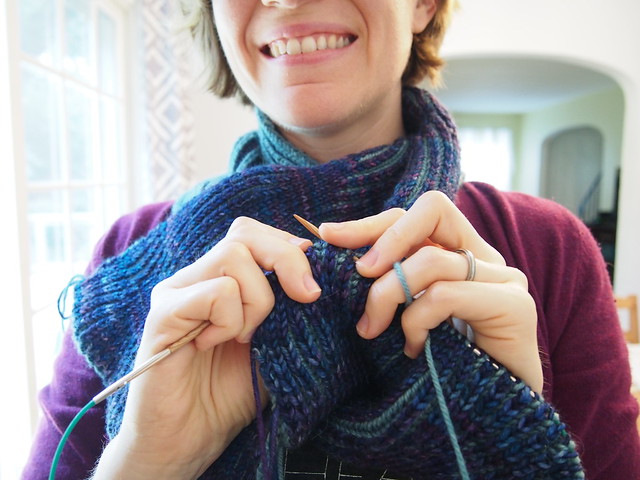