Once I finished Tric, I decided I’d take a wee break from knitting myself sweaters. Mostly, I was undecided about what my next one should be, but also, since the beginning of 2019 I’ve knit myself 2 new cardigans and 2 new pullovers, so it’s not like I’m running low on sweaters or anything! I also am hoping to reknit two sweaters for M in larger sizes – the Elle Melle that is already on the needles, and the Stripes! cardigan that is still just in yarn form.

But anyway, back to things that aren’t sweaters! Remember how I got all excited about brioche stitch after casting on for Paris’s Brioche Scarf? Well, I have a couple of little swatches to share, and then I have an update on the scarf. First up, a swatch in which I play around with the idea of making a reversible cardigan: 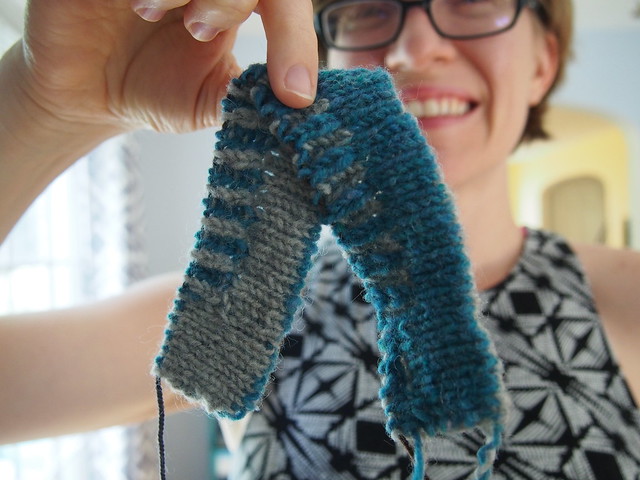 I knit this with some 1-ply Beaverslide sportweight; I’ve got a cone in “Woodsmoke” and a cone in “Lake Josephine” that have been hanging out in my stash for AGES. I’d hoped to possibly use them to make this cardigan that I’m dreaming of, but the yarn seems to have gotten damaged – there were SO many breaks in it as I was knitting, and…well, it has a lot of dried spit holding it together! Spit-splicing let me make the swatch, but I don’t think I’m going to be able to make that work for an entire sweater given how extensive the damage is on these cones, so I’m not sure what to do with them. 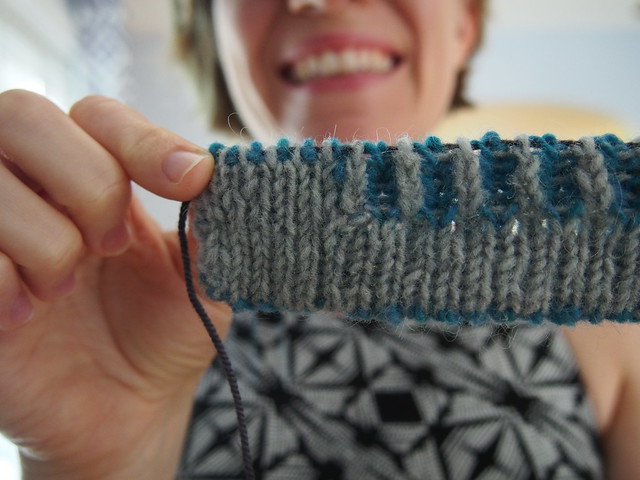 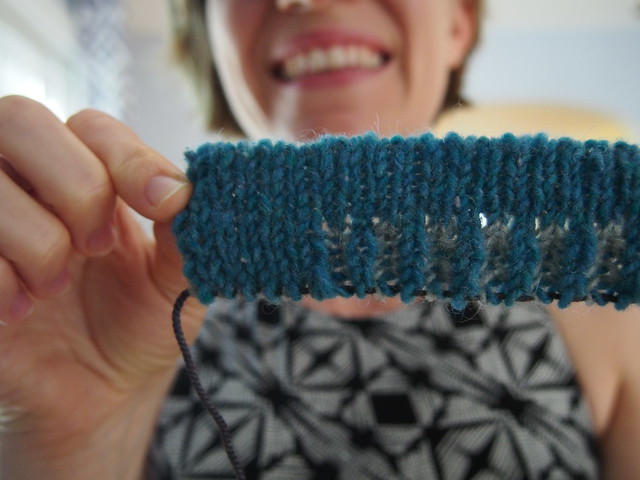 I cast on for these using the Two-Color Italian Cast-On, then did the bottom hem in double knitting; because double knitting is much narrower than brioche over the same number of stitches, I knit stitches together when transitioning from the double knitting to the brioche, but I kept 6 stitches at the edges in double knitting, as “button bands”. I definitely need to play around with ways of creating a non-ugly buttonhole in double-knit fabric, because the one I made in this little swatch was definitely ugly. I’ll keep experimenting, though I’m not sure what yarn I would want to use if I made an actual sweater this way. Something light, because brioche & double-knitting can get quite heavy in dense yarns. I’m open to suggestions!

The other swatch I have to share is this one, which I made this morning: 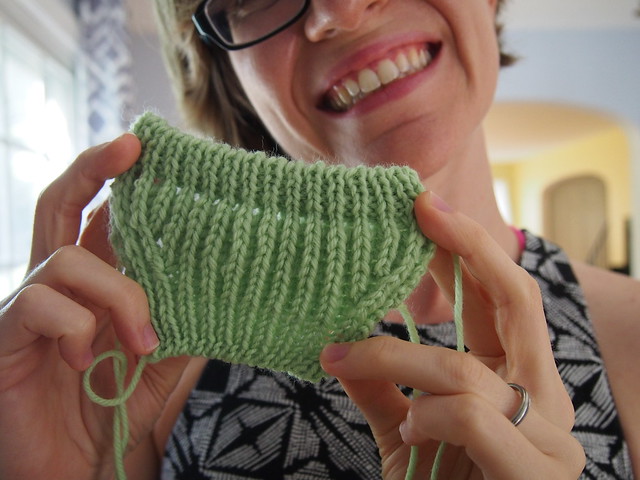 I still have some of that bright green Cascade 220 Superwash left over after knitting Tric, and I thought I’d play around with an idea I had earlier this summer: I want to make “legwarmer”-type things that I can wear between my tights and my boots in the winter, so that a pop of color sticks out at the top, and so that my tights don’t get chewed to pieces by the insides of my boots. And what better way to add pops of color than to use up scraps of yarn I’ve used to make sweaters? Anyway, I did a folded hem in 1×1 ribbing – I’m thinking that for the actual legwarmers, it might be nice to stick bit of elastic inside that folded hem, and I’ll make the hem a bit taller, too – and then switched to brioche stitch, which is so delightfully squishy! I experimented with decreases (since I’ve never done them before in brioche, the first set came out a little wonky, but the second pair look nicer) and did the “bottom hem” in a 1×1 rib finished with a tubular bind-off. Obviously the actual legwarmers will be knit in the round, and much longer, but I think this swatch will give me enough information to make a pair that will fit me well. Note to self: I used size 3 dpns for this!

(Also, the shape of that swatch totally reminds me of the diaper cover I knit for M when she was a baby – how scrumptiously squishy would a diaper cover made in brioche stitch be??) 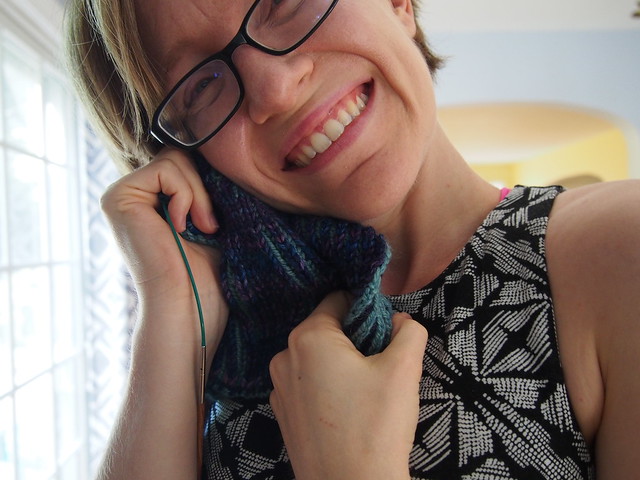 And now, as promised, an update on the scarf. I made a LOT of progress on it yesterday during our Advisor Training meeting; I’ve been advising for several years now, so while it’s useful to get all of the reminders and kind of get my brain back into “being a professor” mode, there’s not a lot of new content, and my hands get twitchy without something to do if I’m going that long listening to stuff I mostly already know. When I started yesterday, I hadn’t quite finished the first pattern repeat, and now I’m over halfway through the second one! 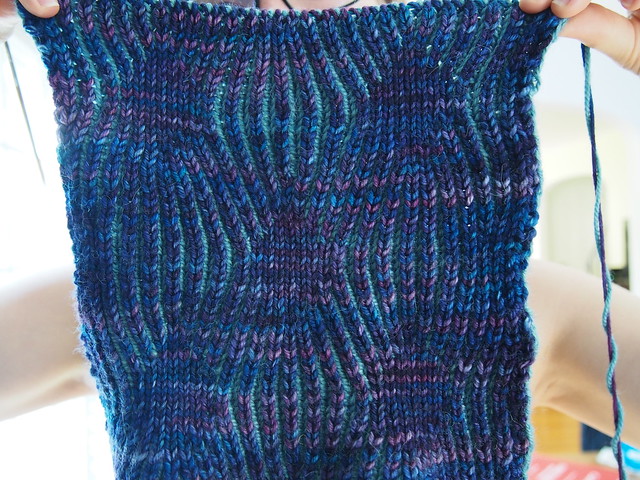 I was really excited to find that 2-color brioche knitting has become so automatic for me that I can do it during a meeting while still paying enough attention during the meeting to participate when needed, and I’m also really thrilled that I’m getting good at “reading” my knitting now, and don’t need to use the line-by-line instructions to know what to do in order to switch from brioche to double-knitting when needed.

Here’s the light side: 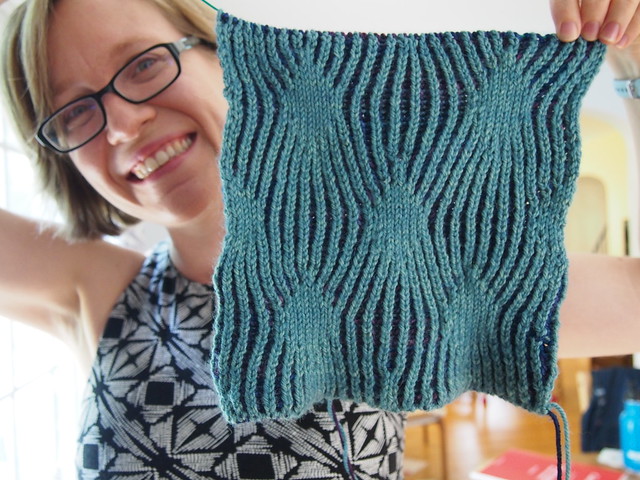 The light side has more contrast, and it’s pretty, but I think I like the dark side better: 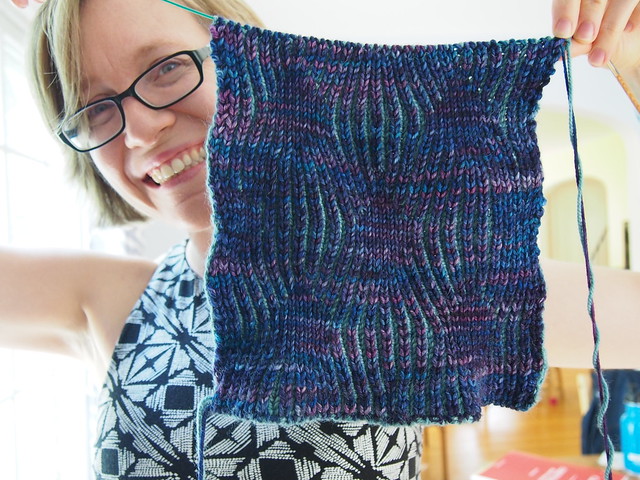 Aren’t those deep blues and purples gorgeous?? I wonder if I’ll get bored of the scarf before it’s finished – that has definitely happened to me in the past with scarves, because they’re just so…long. But the stitch pattern is just so engaging on this that I think I’ll get through it. We’ll see!