Well, it’s August. Which means that my summer break is just about over. Next week, my daughter doesn’t have any day camp, so it’ll be just the two of us hanging out together all day, every day, and then after that, she’s got 3 weeks of day camp while I need to be back on campus most days for meetings and course prep. And then it’ll be Fall Semester. I love my job, so once the semester gets rolling, it’ll be a different sort of good, but the transition is always rough!

Every summer, I feel like I try to cram in SO MANY THINGS and it never quite works out the way I think it will. There’s only so much one person can do in a day, and especially if that person wants to do those things at the level that I want to do them. I’ve made great progress on the violin pieces I hoped to work on this summer (the Chaconne from Bach’s d-minor Partita being the main one). I finished a pair of mitts, a couple of cowls, my Farmhouse Cardigan and I’m pretty sure I’ll finish Tric before the end of the summer, too (and, as is obvious from most of the posts I linked to above, I’ve also been finding my voice even more here on this blog). I’ve also gotten back into swimming semi-regularly. But the embroidery? I’ve done a bit, but I’m still only halfway through the alphabet on the sampler I picked back up, and have only finished a couple of the Sashiko samples. I’ve not done all that much ukulele practice, either. I’ve started reading too many books to make good progress on any of them. I had grand plans of finishing a couple of sweaters for M, too…the new Elle Melle is 2/3rds finished, at least, but the new Stripes! hasn’t even been cast on! And my new sewing machine is still in the box, because I haven’t managed to clear space for it on my sewing table in the basement, which is still covered with junk from our move. Such is life, especially when you’ve got a hungry, hyperactive brain like mine.

But here’s my progress on Tric since my last post: 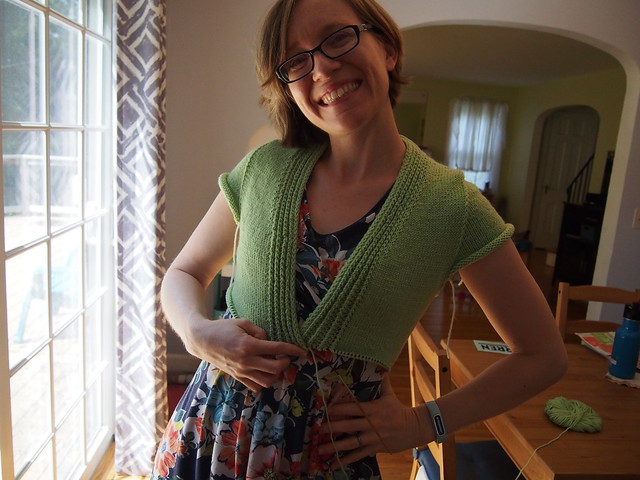 I’ve knit about 4″ of the body, and am well into the waist-shaping and the increases for that great triangle detail in the center back: 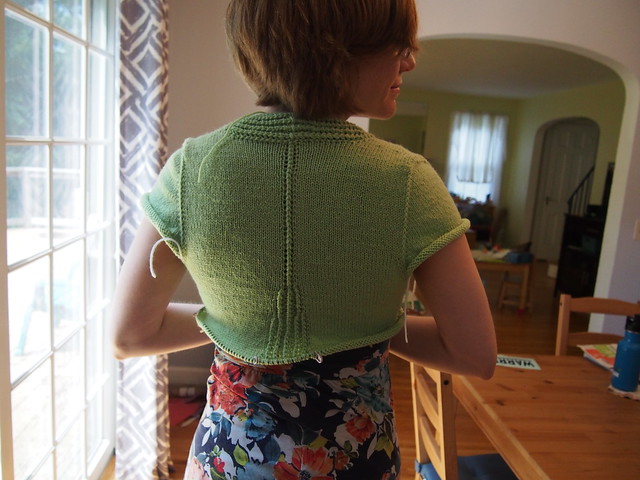 The dress I’m wearing today, by the way, is one of the sleeveless dresses that I’m hoping to wear Tric with this fall. It’s got little flashes of bright yellowy green in the leaves of the flower print, so it’ll look great with this bright green sweater! 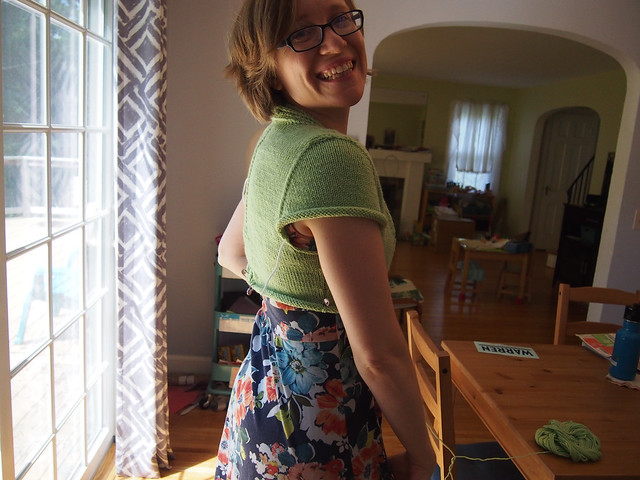 My teaching wardrobe is a little short on the mid-weight clothing that’s best in the early to middle part of Fall semester (and, if we’re lucky, towards the end of “Spring” semester, which really should be called “Winter” semester!). I think Tric’s going to be a nice transitional piece. Maybe it’ll ease this upcoming transition just a bit, too.