So, remember how yesterday I wrote about how the logic of brioche + double knitting was starting to click for me? Well, that click was enough for my creative brain to start churning out idea upon idea of how I could combine the two in knit designs, so I just had to get out some scrap yarn (this is spare Beaverslide Sport/Sock weight) and play for a bit: 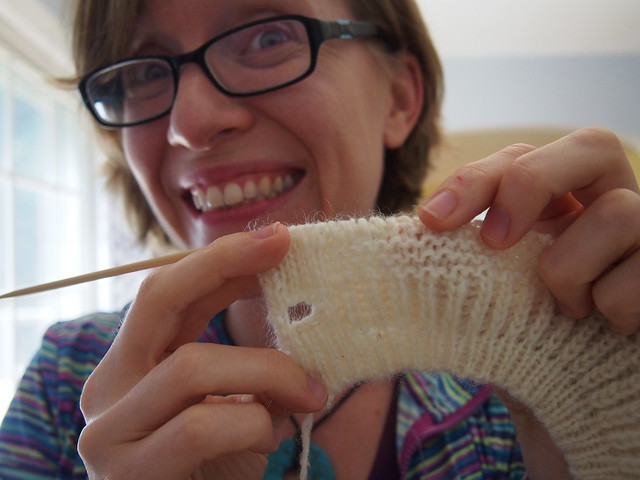 The idea that came to my mind first was a brioche-stitch cardigan with a double-knit hem, cuffs, collar, and button band. My swatching tells me what I already knew – there will have to be some major stitch-count changes from hem to body for that to work, but a double-knit button band, knit along with the cardigan, would be quite easy. I still have a little bit of playing around to do in terms of how wide I’d want to make it, and how to incorporate neat-looking buttonholes, but I think it would be awesome!

Of course, the very next idea that popped into my brain is that such a cardigan could be completely reversible…and that if two-color brioche + double-knitting were used rather than a single color, you could have two DIFFERENT cardigans in one!

And then my brain thought about doing a pullover instead of a cardigan (I’d have to learn how to brioche in the round, since I don’t currently know how to do that!) and making a reversible 2-color brioche pullover with double-knit polka dots or stars. OMG, wouldn’t that be so cool?

And just like that, my brain had planned 3-4 sweaters. Which is both really cool, and also really NOT cool, because brioche + double-knitting is quite time-consuming and time? There really is not enough of it in the day for all of the ideas my brain likes to come up with.

Speaking of ideas and plans, shortly before our trip to Wisconsin, I got the Strange Brew book, and y’all, it is SO GREAT. The yoke recipes make my yoke-loving designer brain so happy, and are giving me a lot of ideas about how I might be able to adjust my Octopus Yoke design to make it a pattern that I could publish in multiple sizes! And I think it’ll be useful for thinking through the sizing if I ever actually publish the top-down Stripes! cardigan (last seen here) as a pattern in multiple sizes, too! (Again though: when?? There’s less than a month before my schedule starts ramping up again in anticipation of Fall Semester!) 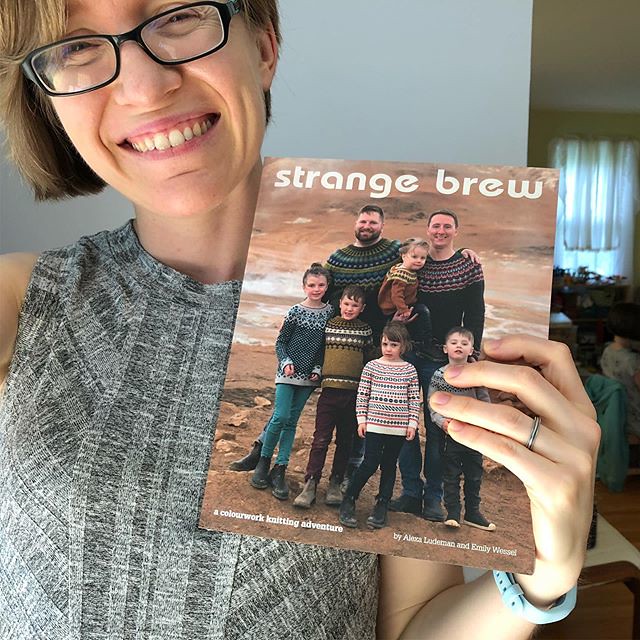 And the patterns in the book are fantastic, too. I’m especially enamored with Compass, and I think that instead of knitting Rusty Tuku with my Juniper Beaverslide Sport/Sock yarn (plus the leftovers from Vita de Vie), I’ll probably knit Compass. And I also really like Icefall, and could make one from the cone of Bartlettyarns sport weight in dark brown that I picked up the last time I was at Rhinebeck, plus one or more of the miniskein sets I picked up there. So there’s another two sweaters my brain is already planning for me, in addition to the possible reknits of the Octopus Yoke and the Stripes! cardigan. Oh, brain, you overwhelm me!

The next sweater on my needles, though, is going to be Tric by Åsa Tricosa, because I’m determined to try that new sweater construction technique before the summer is over. And I have the whole list of other sweaters that I was planning before this summer started, too. OMG. Too many sweater ideas!

Oh, and there’s one more thing that’s making my brain brim with ideas… 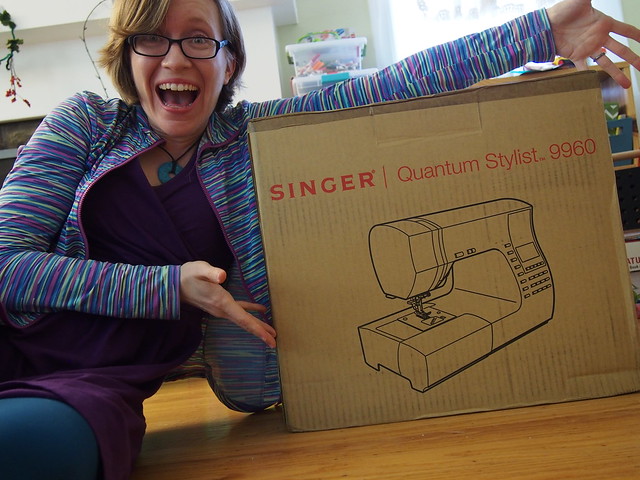 I’ve been saving up for a new sewing machine for awhile, because my old one hasn’t been working (remember all the hand-sewing I’ve had to do?), and even when it WAS working, it was not a very pleasant one to sew on. I read a bunch of reviews, asked friends, decided on the Singer Quantum Stylist 9960 and then got very lucky to find that it was on sale last week, so I got it! I still need to clear some space down in our basement for my sewing table (the table is set up, but it has boxes and other junk piled on top of it!) but then I’m going to try to really learn how to sew, hopefully starting with a Dress No. 1 (or several). I know I have the pattern, but I’m not sure where it ended up after I move, so I’m going to look for it for awhile and if I don’t find it, I’ll just order another copy – I don’t mind giving Sonya Philip a little more of my money!

So anyway, that’s where my brain is…absolutely full to the brim with ideas, and definitely not enough time to make them all happen as fast as my brain wants them to. Deep breaths, self. The ideas will keep. (I hope.)