I made it happen: as of this morning, there are now TWO sleeves completed for the Farmhouse cardigan! 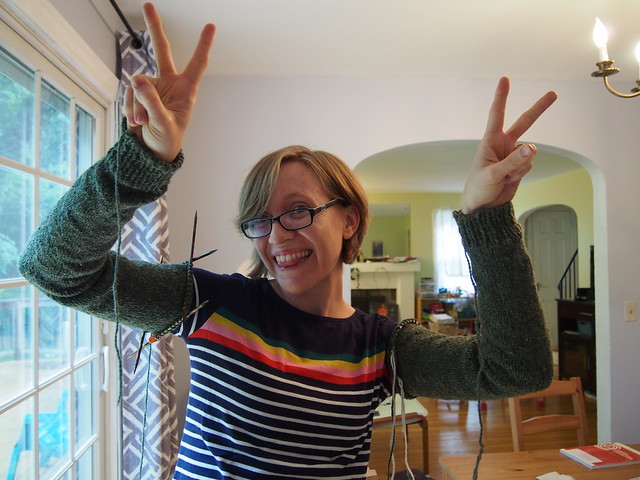 Today is actually on the chilly side, and rainy. That’s a welcome break from the incredible heat we had over the weekend (thank goodness for air conditioning!), but kind of a bummer for taking photos. 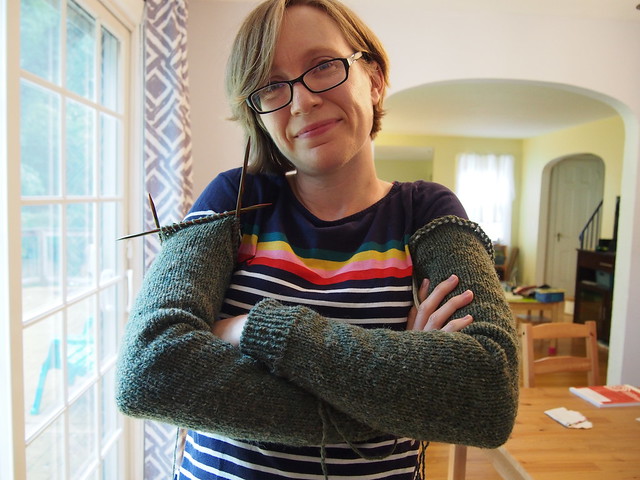 I’m looking forward to joining the yoke together and finishing off this cardigan – I do think I’ll be able to do that before the end of the month!

And I’m making progress on my brioche + double knitting project, too:

I’m about 2/3rds of the way through the pattern repeat, and the logic of it is really starting to click. I’m really wrapping my brain around how double knitting + brioche go together, in that both involve slipping every other stitch – it’s just that in double knitting, you carry the working yarn behind or in front of the stitches you’re slipping (in between the layers) whereas in brioche, you’re wrapping it around the stitch that you’re slipping, giving it a little “shawl”.

I’ve even managed to fix mistakes! It’s not so bad, for example, if you realized that you treated a slipped stitch as if it were double-knit, instead of brioche – that working yarn strand, as a kind of “float”, is still hanging out behind or in front of the stitch and can be lifted up on to the needle to do the brk or brp stitch. I mean, you wouldn’t want to do that all the time (it would mess up your tension) but as an occasional fix, it works. It’s so nice to know how to fix something, rather than being stuck, or having to rip everything out. It’s incredibly freeing once you can read your knitting and really understand the geometry of how the stitches are constructed, because mistakes aren’t so scary anymore!

Here’s what the dark side of the scarf, which is my favorite side, looks like when I stretch it out a bit: 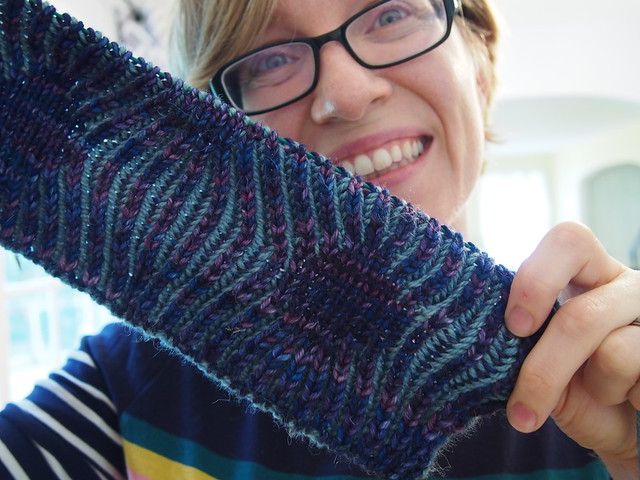 I just LOVE those dark purples and blues so much, especially with the little pops of the light robin-egg blue. The color combination is turning out even more beautiful than I imagined it would! And I’m also really glad that I’m using heavier yarn than is called for; when I look through the project photos on Ravelry, I notice that the projects I like best were done in worsted weight, rather than sport. There’s a fullness to the stitches, and a solidity to the double-knit sections, that I think you just don’t get (at least, not on size 4 needles) if you’re using lighter-weight yarn. In any case, I’m just absolutely delighted with how this project is turning out, and I’m so glad I decided to dive into it. I have no idea when I’ll finish – considering that I’m making a scarf in which each row is effectively knit TWICE, it might be awhile!