A new-to-me discovery this summer has been the Fruity Knitting podcast. I can’t remember how I came across it in the first place, but since the semester ended, I’ve been watching older episodes while I knit once I’ve finished whatever work I need to get done, and have been really enjoying it – enough that I decided I should become a patron. In the most recent couple of episodes, they introduced a KAL centered on “Scary New Techniques”. Well, I’m a pretty fearless knitter, so there really aren’t any techniques that scare me per-se, but one in particular that I’m interested in, but have never done, is two-color brioche. (For that matter, I can only think of one time, and it was well over a decade ago, that I’ve even done ONE-color brioche). And ever since I saw the Paris’s Scarf pattern, which combines two-color brioche with double-knitting (another technique that I’m fascinated but fairly inexperienced with), I was smitten. 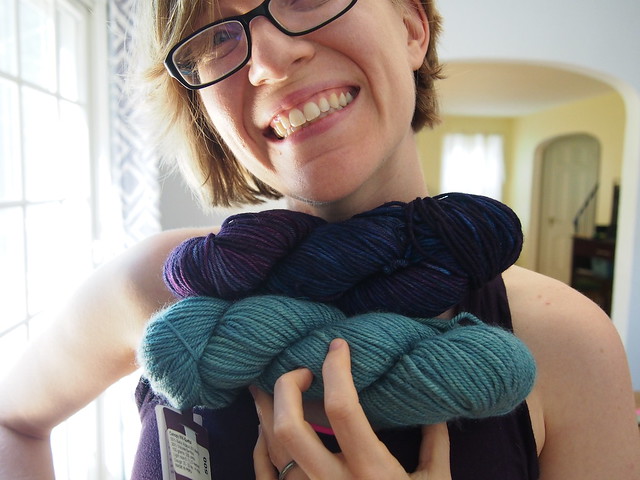 In my stash, I had a couple of skeins of Fibre Company Canopy Worsted in “Quetzal” that had no project assigned to them, and another couple of skeins of Malabrigo Worsted in “Whales Road” with the same status. I really like the way that the slightly blue-streaked purple looks like the lighter robin-egg blue color! The pattern calls for sport-weight yarn, but I’m going to give it a go with these light-worsted yarns and cross my fingers that it works!

The first step was learning how to do the two-color Italian Cast-On, but that turned out not to be too difficult, because it’s very nearly the same as the tubular cast-on that I use when knitting 1×1 rib in a single color. The set-up rows took a little more focus, but look!

I figured it out!! The “blip” you see in the middle (with two light blue stitches in a row) isn’t an error – it’s the set-up for the double-knit part of the pattern. It’s mind-blowing in the best way to figure out how double-knitting and brioche go together! 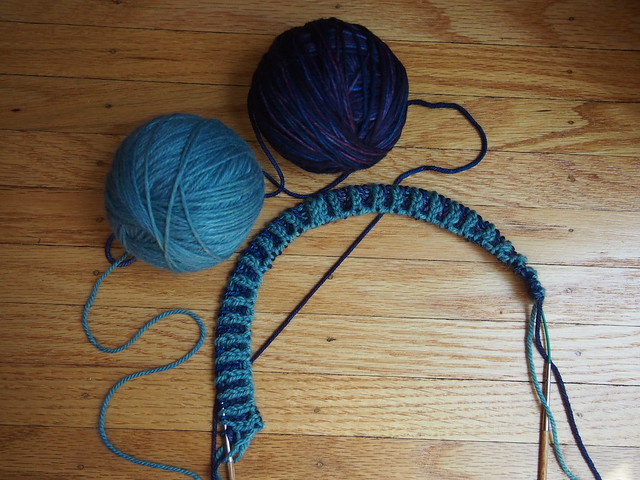 But what you might notice in the photos is that my scarf is looking WIDE. I had thought that I should use larger needles because I’m knitting with heavier-weight yarn, so cast on and started with size 6’s, but now that I’m seeing what I’ve knit so far, I think I need to rip it out and start over again on size 4’s like the pattern calls for, because my stitches feel a little bit more loosey-goosey than I’d like, and I’m also hoping for a slightly less wide scarf.

But hey, it’s not wasted time – I’ve (sort of) started to wrap my brain around how two-color brioche works!

And the whole point of the New Technique KAL is to develop muscle-memory for a technique that’s new to you, so I’ve already started that process even if I’m going to have to rip out what I’ve done so far.

Don’t worry, I haven’t forgotten about my sweater projects – I just want to have a smaller, more portable project, too, and couldn’t resist joining the KAL! I’ll have a post about sweater progress soon :)