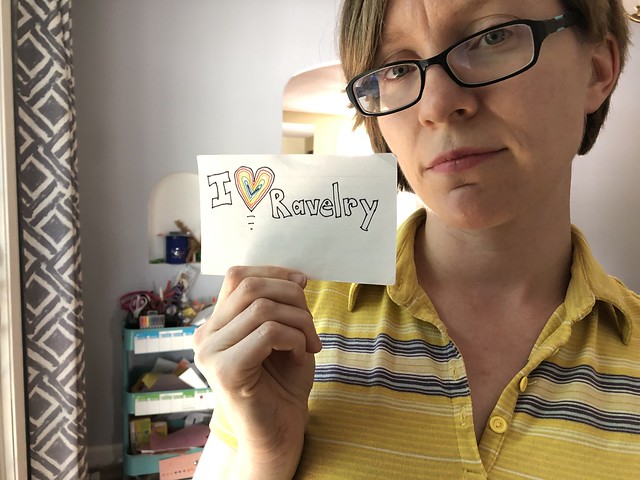 You can donate to Ravelry here

Ravelry made a really big move this weekend, and I worry they’re going to get a lot of pushback. While I have some mixed feelings, I think they made the best, strongest move they could make, given all of the circumstances and constraints involved, to ensure their site remained inclusive to all.

Some have said, “but if you’re inclusive of all and then you ban support for Trump and white supremacy, then you’re NOT actually inclusive of all,” and that’s something I want to push back on. It’s the same “trap” that was laid for those promoting “tolerance” or “acceptance” – the idea being that you have to tolerate intolerant people, or accept people who don’t accept you, in order to say that you are “tolerant” or “accepting”. And it just doesn’t work that way. It *can’t* work that way. White supremacy is an inherently non-inclusive ideology, ergo it has no place in a community that IS inclusive.

Others will make an outcry about freedom of speech, but it’s important to remember that Ravelry is not the government, it’s a private website. This XKCD comic sums that up nicely.

I’m quite sympathetic, though, to the view that we don’t make things better by silencing voices, even those voices saying abhorrent things. It’s not like the viewpoints behind those voices magically go away just because we’re not hearing from them – they can simply fester in the darker corners and we’ve seen the ugly places that can lead. It’s hard to reckon honestly with what is broken in our society if the broken stuff is hidden from view. It can even make it harder for those of us who wish to fight for justice, because when the true injustice is not in full view, it’s easy to frame us as overreacting…it can turn into a kind of gaslighting, when there’s no openly viewable evidence of the abuse we know is taking place, nothing to show the doubters. And just as visibility is important in order for people to feel seen and included and safe, it can also be really important in order to know when you’re NOT safe. Someone who hides their misogyny is more dangerous to me than someone who’s loud about it, for example, because I can at least know to avoid the loud ones. And of course, we can’t begin to try to change the minds of people who hold abhorrent views if we don’t know they hold them.

And yet, it’s not as simple as just letting everyone say whatever they want and imagining that the best ideas will win out. In a community, if we allow the most intolerant, most abusive people to have free reign to say whatever they like, one of the consequences is that this generally has the effect of driving marginalized people away (along with just generally decent people of all stripes). I mean, this is in large part what it MEANS to be marginalized within a community – that your existence is on the margins of a community, your voice not heard, drowned out but also driven out by others. And it’s important also to remember that it’s much easier to say that we should have all of the nastiness out in the daylight when the nastiness isn’t really directed at you, anyway. It’s a lot more abstract, then.

To bring this into an arena where I have more direct experience of being driven away, I can point to the open and virulent misogyny on the atheist corners of the internet in the early 00’s as the thing that drove me away from “organized atheism” (I’m still an atheist, but the UU church is a much better home for me). If atheist online communities were places where I could expect to see misogynist rants, presented as “just plain logic”, and places where I could expect to be subjected to harassment and abuse on the basis of my perceived gender, then they weren’t places I could exist freely and happily and safely as myself. And as people like me fled, the toxicity there grew and grew.

There’s a role for moderation, and the kinds of comments that a community allows to stand do signal what kind of community they are, and who is welcome. If you log into a community site and see people debating whether you are an equal person (because that IS what is happening when people post things in support of white supremacy, or post things that are anti-LGBTQ+, etc), does that make you feel safe to speak up, to be your whole self? When those comments stand without pushback, what does that signal? Do you feel welcome?

I’ve never been a big user of the forums on Ravelry – for me, it’s a place to organize my projects, keep notes, make plans, and be inspired by other people’s projects. So I’ve been pretty blissfully ignorant of how nasty things can get there. But I do know these are long-standing issues on Ravelry because I have friends who are people of color who’ve left the site because it never felt especially “safe” for them. This is something that is far too easy for white folks like me to miss, but we should be listening. Ravelry HAS listened. Their new policy seems to be an attempt to thread an incredibly tricky needle, and they’re erring on the side of ensuring that people who are marginalized have a place where they can just exist, be happy, be themselves, be safe.

Sure, you can say we all need to toughen up, fight back, and just stand up for ourselves in this “marketplace of ideas”, but when the “idea” is that you aren’t an equal person, when your basic human dignity is up for debate – that’s not an abstraction for you. That turns your very existence into a battle, and to be at the center of a battle for your own right to exist as a person with equal human dignity is crushing. Everyone needs spaces where they don’t have to fight to just exist. Ravelry is trying, however imperfectly, to be one.

And for what it’s worth, those who push for inclusivity DO include people with white supremacist views in their circle of humanity; their views are what’s abhorrent, but their existence as people with equal worth and dignity isn’t what’s in question, and it never has been. There’s no symmetry here, though they’ll likely try to claim it. What those who work to create inclusive spaces are saying is that explicit support for views which hold other people to be lesser are not conducive to a space that is truly inclusive to all. They’re contradictory to it, in fact. They’re basically anti-social, in a diverse community, and communities will always need to push back against anti-social behavior; that’s part of what it means to BE a community. And it’s best, I think, when community norms are made explicit, because then everyone know what the expectations are. That’s how I see Ravelry’s decision.

It’s complicated, and I don’t think there’s any obvious “right” answer for how to address these things – I think that the right response is going to depend on the nature of the community. I’m not sure I love the explicit connection to Trump in the Ravelry policy, because these issues are so much bigger and deeper than him, and I think that’s likely to trigger a sort of persecution complex amongst Trump supporters (I know there’s a strong tendency among Trump supporters to feel aggrieved and resentful towards “elites” who they, perhaps sometimes rightly, perceive to be judging or dismissing them; the risk of this policy providing fuel to that fire is not insignificant). But I also have seen support for Trump wielded as a weapon against those with marginalized identities by those who know exactly what they’re doing, who intended it as a weapon. And recent research suggests that Trump support, unlike general conservative/Republican support, really is driven more by out-group hatred than in-group affinity. That’s a really dangerous direction for our country to be going in, and I think we do need to be very clear that it’s not ok – that hatred doesn’t have a place in our communities. Ravelry is taking a strong stand against hate with their new policy. The calculus won’t look the same for every community, and shouldn’t. But I think it does make sense for Ravelry, and I appreciate their bravery in taking such a strong stand. I’m worried they’re going to get a lot of pushback, though, so I want to share the link to donate to them, which is pretty well-hidden on their website. Please consider thanking them for taking a stand and working to create an inclusive community by donating to help make up for the advertising dollars they will almost surely lose.

5 thoughts on “Thank you, Ravelry.”