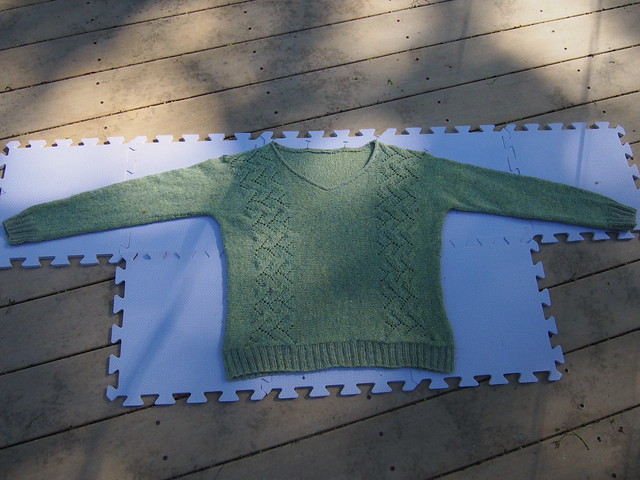 It’s Vita de Vie! I was a little surprised that it turned out to have a v-neck – the pattern photos don’t look that way, but there’s no way that the instructions, as written, wouldn’t yield a soft-V. My Instagram friends convinced me that the V is nice because it echoes the Vs in the lace, so I think I’m going to stick with it, but if I hadn’t been trying to follow the pattern pretty closely (because it’s such a new construction method!) I probably would’ve aimed for a rounder neckline. 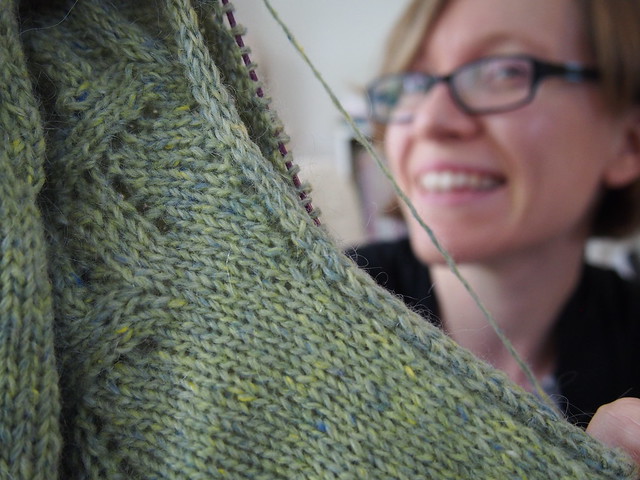 I ended up doing an i-cord bindoff, instead of the plain one called for the in the pattern, because I thought it would look a bit neater. I’ll do a full FO post about the sweater once it’s dry and I can take some modeled photos with it. 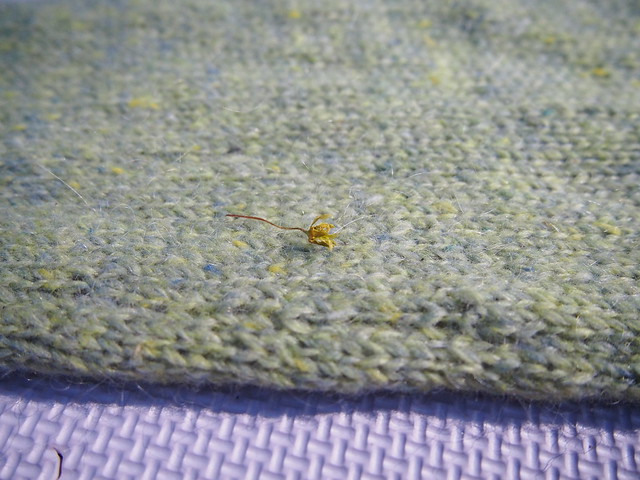 I wish I could transmit texture via the Internet – there just aren’t words to capture how delightful the Beaverslide Sport/Sock yarn feels after blocking. It’s just the best.

While I was finishing up Vita de Vie, I cast on for what I’m hoping will be my next sweater: a Little Wave cardigan in Bartlettyarns Worsted in “Bracken”, which has been hanging out in my stash for a good decade, I think. 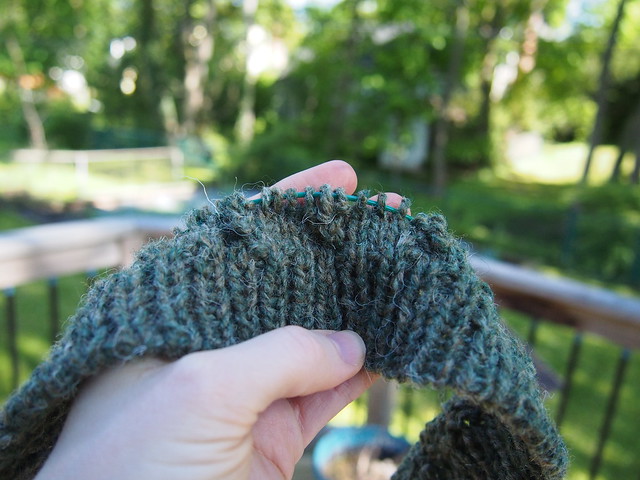 I’m not 100% sure about the pattern-yarn combination here, though – I love Bartlettyarns, but so far, the pattern itself is coming out kind of muddy. But I’ve only done two rows of it, so I think I’m going to knit a full repeat before deciding whether the stitch definition is what I want. If I don’t turn this into a Little Wave, I might use a simpler stitch pattern like garter rib. Maybe a Farmhouse Cardigan. 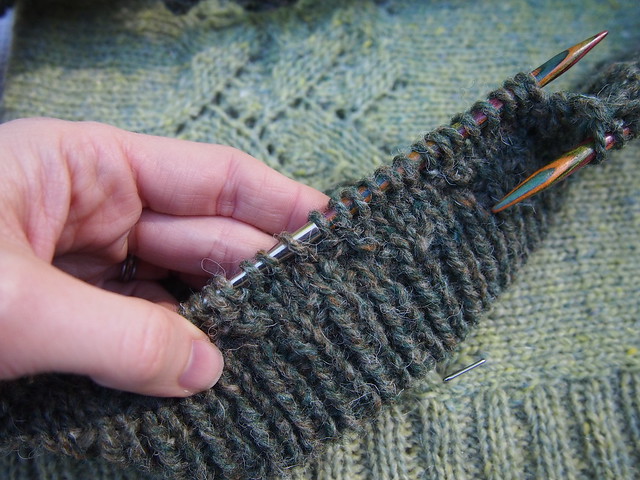 I laughed when I was taking pictures and thinking about my summer knitting plans, because I think this very well could be a summer in which I knit nothing but green sweaters. Because after this one, I’m hoping to knit Tric, which a Ravelry friend very kindly gifted me (with hopes that I’ll blog about everything I learn from the pattern!) and the yarn I’d use for that? It’ll be bright green Cascade 220 Superwash (which was going to be a blanket for M, but never did become that). And then I was thinking that the leftover light green from Vita de Vie would work ever so nicely with the dark juniper green Beaverslide Sport/Sock that I have in a Rusty Tuku…which also has a very interesting construction! So I suppose it’s both the Summer of Green Sweaters and the Summer of Trying New Sweater Construction Methods, and that’s fine by me! I do have a LOT of green yarn in my stash – green is one of my favorite colors (I have green eyes, too) and found its way into my stash quite often throughout the years, but somehow I keep never getting around to using it. So that’s my plan for the summer: GREEN!

1 thought on “a summer of green sweaters?”