The end of the semester has been especially busy, and as seems to be normal for me, I’ve been sick for most of it. The pileup of research paper feedback, Thanksgiving, and my daughter’s birthday is always a mess! But somehow, in the midst of all of that, I managed to finish my Tensho cardigan! 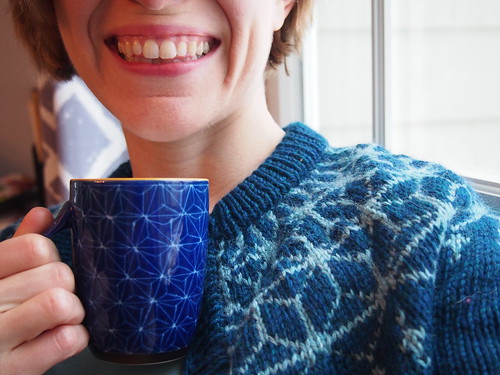 Pictured with the mug that inspired the knit!

As you can see, I ended up deciding to go with a folded rib neckline, just like the ones I knit for Gamaldags, Winter Traveller, and Skógafjall. What can I say, I just really love the way they look and feel! 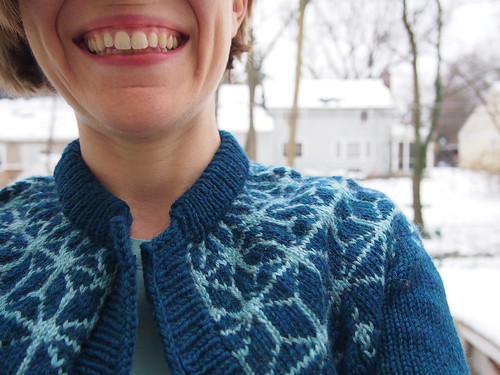 Another thing I did, which has become my norm when knitting yoke sweaters from other people’s patterns, is add a couple of short rows right below the collar in back – essentially, if you imagine where the “raglan” lines would be, I do the wrap&turns about where the front raglan lines would be, which raises the back neckline perfectly for me. 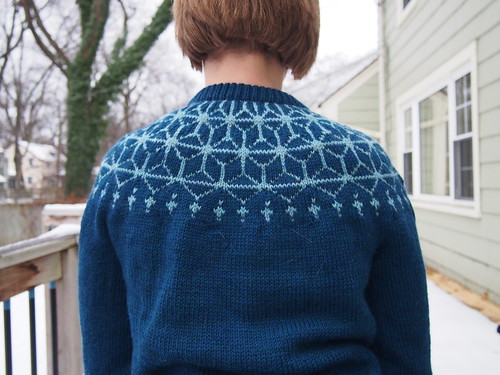 I still need to choose buttons. But before that, I need to decide whether I want to fix the fact that I put the buttonholes on the “wrong” side compared to what I normally do – it’d be easy enough to fix, since I did an i-cord bind-off buttonband, so not very much would need to be ripped and reknit. I’d also really like to cover the steek, but need to find a good ribbon or cloth tape to use. I’ve never done that kind of steek-covering before! With really sticky wools like Lopi I generally cut without any reinforcement and just leave my steeks raw, but for Cascade 220, a smooth worsted-spun yarn, I did a crochet reinforcement, and I actually would feel most comfortable with a ribbon covering, I think. 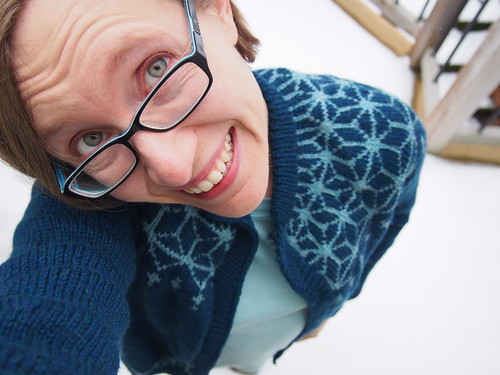 I didn’t get the best pictures, because trying to take self-portraits in a rush before the sun sets, when it’s cold and your deck is covered in snow, is just not ideal! But the snow does make for a nice contrast in the background. 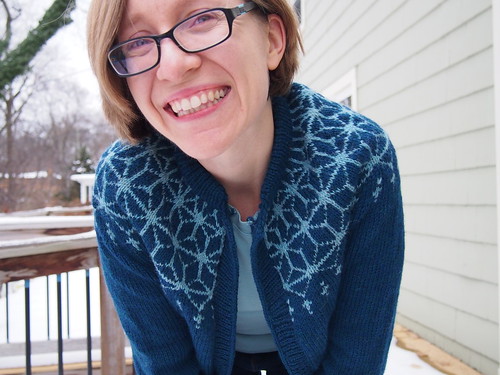 I’m really pleased with how this turned out, though in knitting it, I found myself wishing I were knitting with Lopi, or Beaverslide…something a bit more toothy and wooly than Cascade 220…and I think I’m feeling that wish when wearing it, too. I wonder if I’d feel the same way if I’d knit it as a pullover (you know, as called for by the pattern) – I think I might want something a little “denser”/less drapey out of my colorwork cardigans than I do from a pullover. I’m sure I will still wear this one a bunch, but I wanted to note this for my future knitting self…I’m just a wooly-wool sort of person! But I’m glad I was able to put the leftovers from Andrew’s Seamless Hybrid to good use!