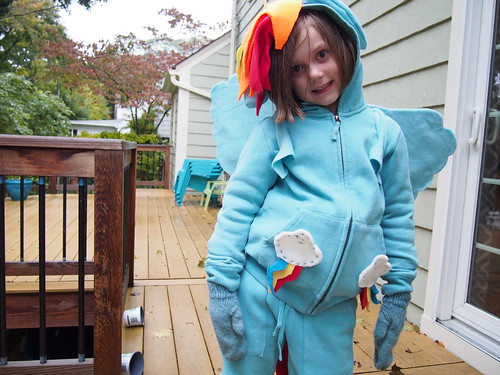 Back in like, January, M decided that she wanted to be Rainbow Dash for Halloween. This kid, when she gets a Halloween costume idea? She doesn’t budge from it. (Which is quite nice, actually – I’ve heard plenty of horror stories about last-minute costume idea changes, so I guess that’s one upside to a kid who hyperfixates on things!)

So this summer, I started planning, and I took advantage of sales at Joann to pick up the fleece and other supplies. I wanted to minimize sewing, because my machine is currently nonfunctional. One of these days, I’m going to get a new one; it’s just not worth it to put any more money into fixing up my crappy old one. Anyway, my plan was: Primary.com sweatsuit (in “pool”) + rainbow fleece + safety pins + foamcore + glue gun = Rainbow Dash! And I have to say, it worked out pretty well! 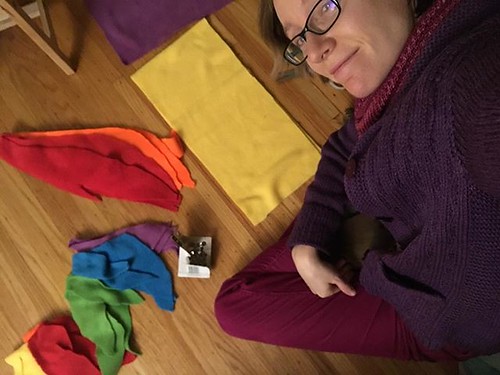 I finally got around to actually MAKING the costume last week. It was a LOT of fleece to cut up into pieces for the mane and the tail, and SO MANY safety pins, but it all came together with no sewing! 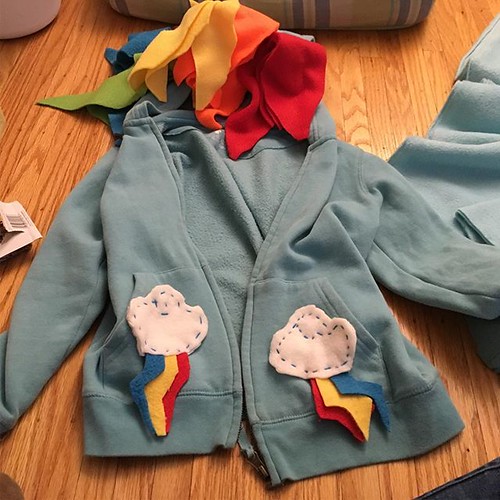 Well, I take that back – there was a tiny bit of handsewing, to make the “cutie marks” (which are actually pins that can go on the pockets of her hoodie). 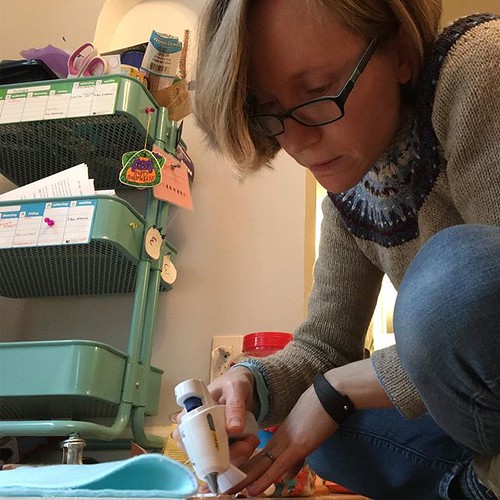 The wings were made by glueing fleece to foamcore that I cut in the shape of wings; I had thought about possibly just painting the foamcore, but the fleece was so deeply on sale at Joann it was actually cheaper to just get a yard of it than to get paint. I’m really pleased at how well I was able to color-match the fleece to the sweatsuit! I was also able to use the extra light blue fleece to create a strip to which I pinned all of the mane pieces (before pinning the strip to the hood) and then a tie-on “belt” to which I pinned all of the tail pieces, and “straps” which I created by making slits in a strip that I fed though a slit in each wing. Here you can see the wings from the back: 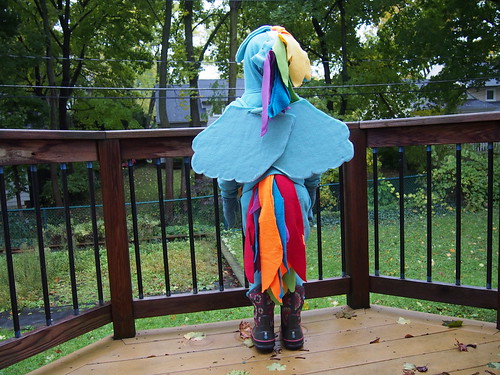 I wish I’d made that wing strip wider, to keep the wings from folding in over each other so much, but c’est la vie. 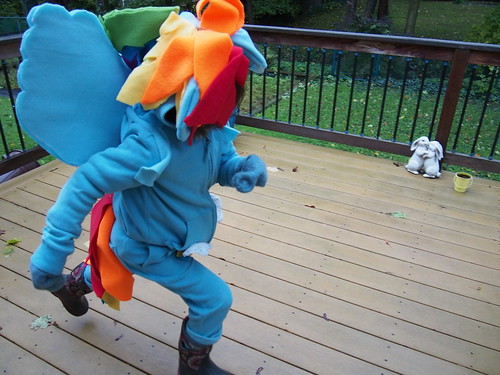 She had such a blast running back and forth on our deck creating “Sonic RainBOOMs!” 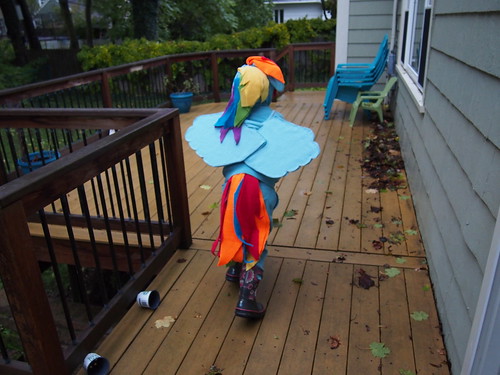 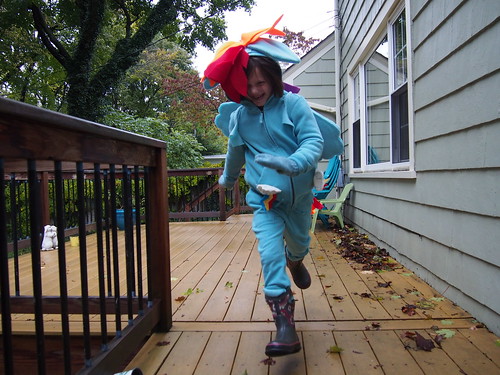 It definitely looks “homemade”, but that’s how I roll when it comes to Halloween costumes, and I’m pretty charmed with how stinking cute my little Rainbow Dash is! 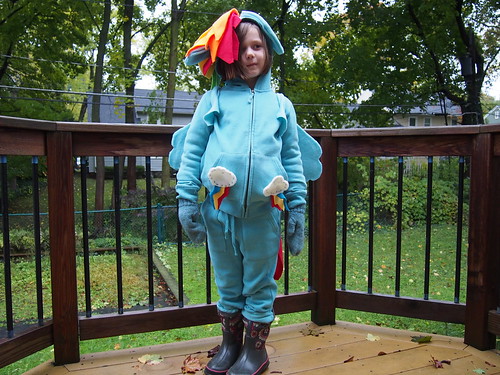 You might notice that she’s also wearing some (almost-)matching mittens in these pictures. She insisted that she needed blue mitten “hooves” to complete the costume, and, well, I had some leftover Cascade Eco+ in Summer Sky Heather, so I whipped together some quick top-down mittens. They’re a little big and I’m not super happy with how the tops turned out, but stay tuned – I’ve been playing around with it and have a cast-on that I’m really happy with for top-down mittens, and I hope to share a tutorial for simple single-color top-down, ribbed-cuff mittens here on my blog sometime soon!

I hope everyone has a wonderful last day of October, and if you’ll be trick-or-treating, I hope you have a better forecast in store than we do! (It’s supposed to be very cold and rainy on Wednesday night – good thing M can fit a sweater and leggings underneath her sweatsuit, and good thing she has those mitten-hooves, eh? 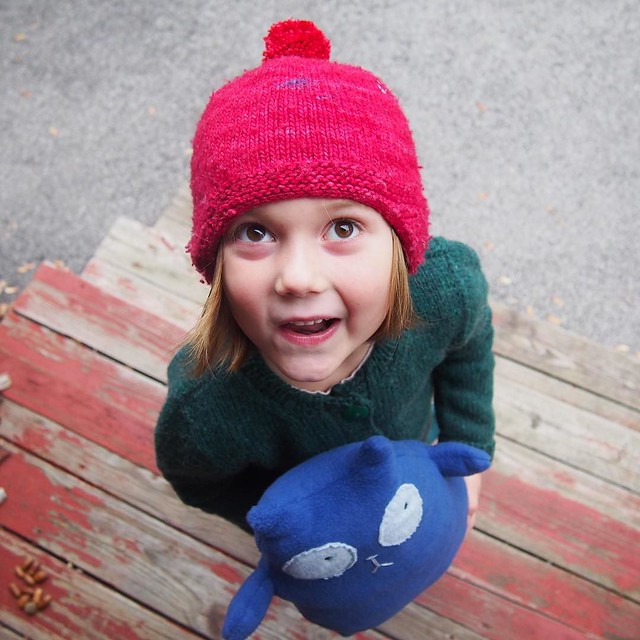 Last year, I knit a sweater (and sewed a cat, and made a pompom) so that M could dress up as Peg + Cat. I never actually sewed pockets for her sweater, so she’s just had steeked slits on the sides for an entire year. (Thankfully, she mostly wears the sweater over dresses that have side pockets, so the slits serve as dress-pocket access).

Anywho, one year later, the sweater still fits, and I decided that maybe I should actually put pockets in it. So I borrowed some time on a friend’s sewing machine, and stitched up some flannel pockets: 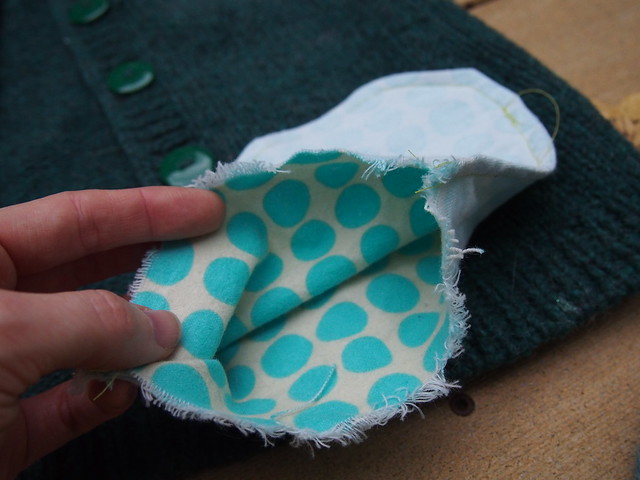 I did french seams, which is why I wanted to borrow a machine – doing TWO sets of seams per pocket by hand just seemed too much, and that’s what I’d need to do right now because my sewing machine is defunct. Then, I stitched the pockets to the inside of the steek by hand, mostly while I was at work: 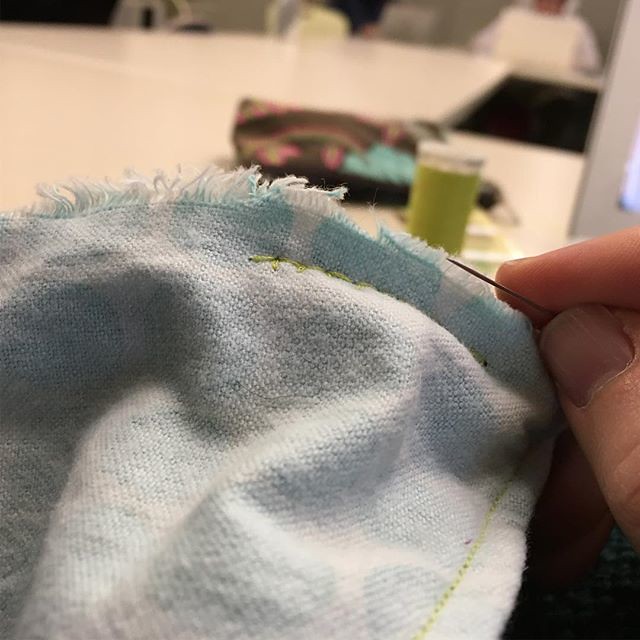 (The nice thing about being a writing professor is that sometimes your students are working on writing during class, which means you can work on sewing. My students already know I’m a crafty person, so they weren’t shocked at all when I pulled out this sweater and started stitching!)

We’ve had nothing but rain recently, which has made getting photos a bit of a pain, but here is M’s Peg sweater, in its now TRULY FINISHED glory! 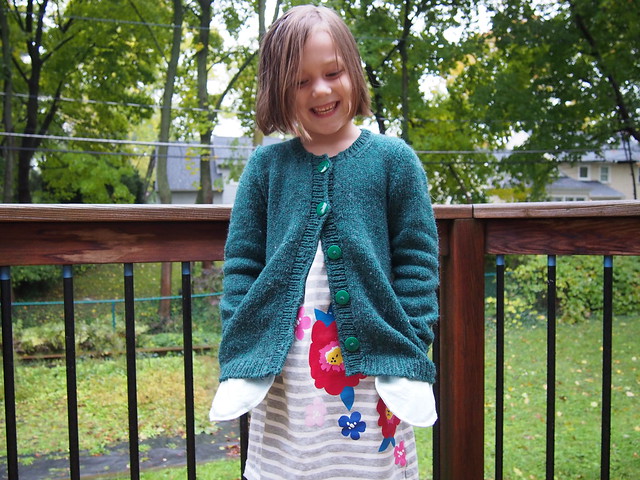 I really like the way the polka-dotted flannel fabric looks with the color of the sweater: 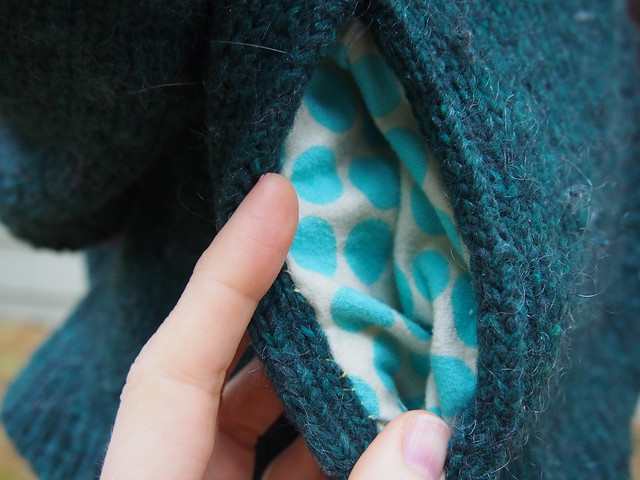 The year for school, she’s supposed to dress up as a character from a book for their Halloween celebration, and since Peg + Cat actually started as a book series, and her costume still fits and is easy to wear to school (and Cat fits nicely in her backpack), that’s what she’ll be dressing up as!

She’s got a DIFFERENT costume in the works for Trick-or-Treating, though: I’m turning her into her beloved Rainbow Dash, from My Little Pony. I’ll share photos of that once it’s ready; I’m still working on the wings at the moment. I’ve got a few other things to share, too, if the weather will ever cooperate with photo-taking: progress on Tensho and a recipe for top-down mittens! Rain, rain, go away, please!