I didn’t manage to turn as much yarn into sweaters as I’d hoped to this summer, mostly because it was just SO hot, and without air-conditioning in our new house, knitting with wool was a bad idea. But we’ve had a couple brief bursts of cooler weather, and I’ve been able to make some good progress on my next sweater: a cardiganized Tensho sweater. 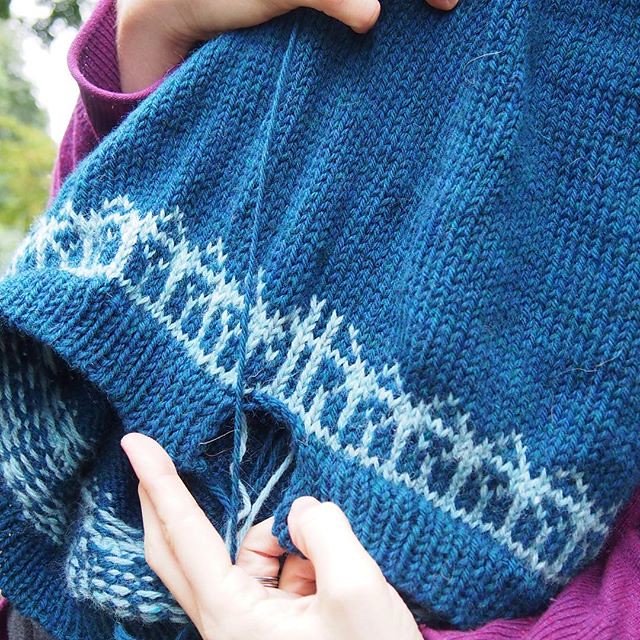 I’m using yarns leftover from the sweater I made for my husband nearly a decade ago, back before I had a good sense of how much yardage husband-sized sweaters actually needed. When I saw the Tensho pattern, I immediately had the idea to use these yarns. The inspiration was this mug: 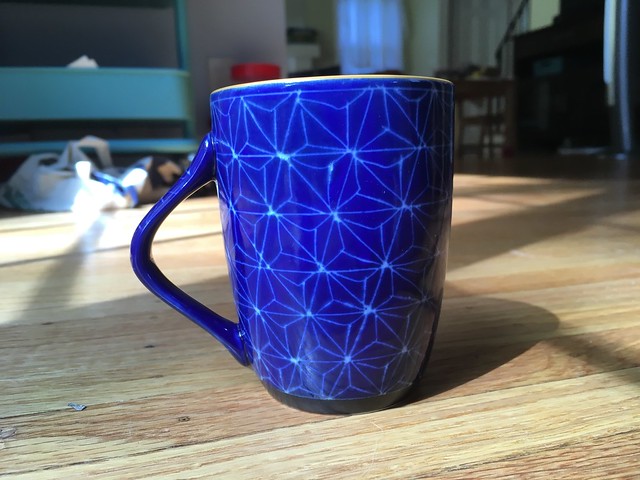 I bought that from a local Fair Trade shop where I’d been performing Bach as part of a fundraiser for my daughter’s school a few years ago…I just fell in love with the colors and the design. So I’m looking forward to having a sweater that matches it!

I went back and forth about whether to knit Tensho as a pullover (like the pattern says to do) or to cardiganize it, but ended up deciding that a cardigan would probably be more useful to me, especially if I ever get serious about learning to sew, because I want to make a bunch of dresses and cardigans definitely work better with dresses than pullovers do. 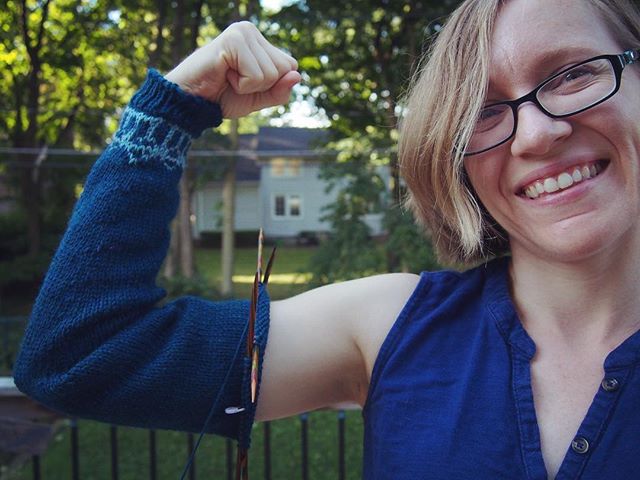 I’m now getting close to finishing the first sleeve, thanks to some knitting time at the first Rochester Knitting Guild meeting of the year, and more of it in the car on the way to the Finger Lakes Fiber festival: 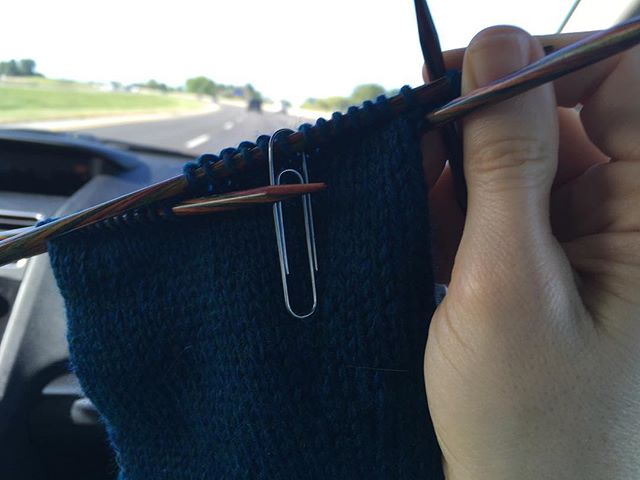 We haven’t been to the Finger Lakes Fiber Festival since Fall of 2011, when I was pregnant with my daughter! All of the years since then, we’ve gone to Rhinebeck instead, but we just can’t make that happen this year. It’s much, much easier to do a 35 minute drive than a 5+ hour one!

At the festival, we got to say hi to the alpacas: 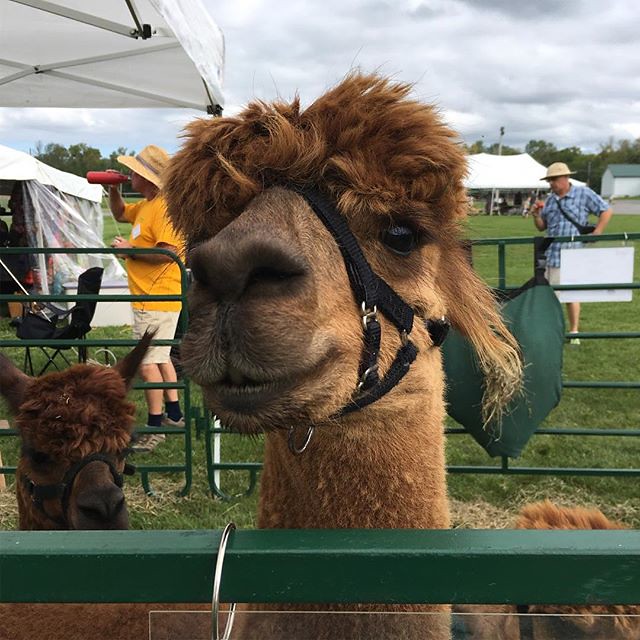 And my daughter fell madly in love with an angora bunny: 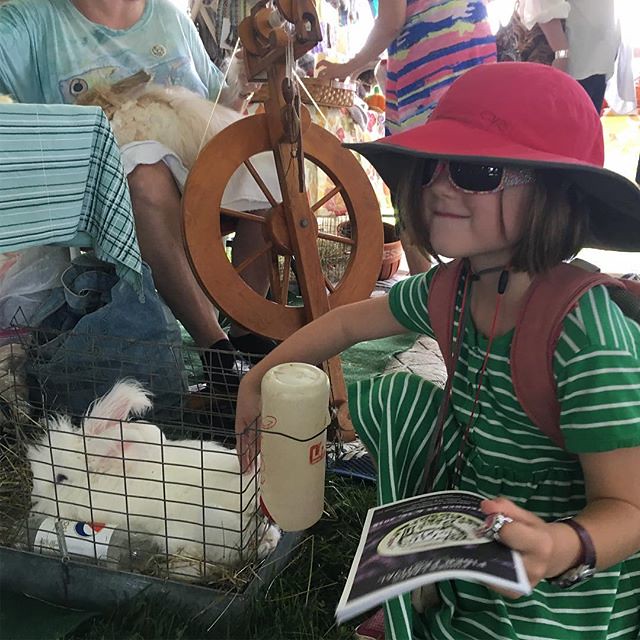 She pet that bunny for a good 15 minutes straight! I didn’t end up buying anything at the festival…between the current over-full state of my stash, and being too frazzled by the heat and managing my daughter’s impulse-control challenges to make any decisions, purchasing yarn just wasn’t in the cards. It was lovely, though, to get to touch and explore yarns that I previously only knew from the internet, especially Jill Draper’s yarns. We did end up making a couple of small purchases for my daughter, though… 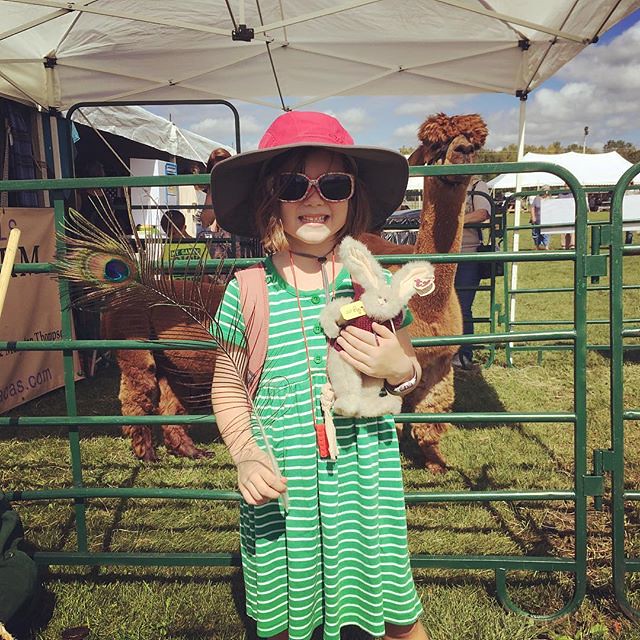 A peacock feather, and a bunny toy, to commemorate her encounter with the angora bunny. Her bunny, which she named “Bunbun”, joins Ellie the Llama and Baba the Sheep in her collection of fiber-animal toys purchased as fiber festivals.

We’re having what I hope is one last blast of heat, and by the end of the week, we should be in more knitting-friendly temperatures. Thank goodness!

So, I didn’t intend to go quite so long without posting, but with the beginning of the semester, and a string of unpleasant illnesses for me, I just haven’t been able to DO very much lately. But look what I made this weekend! 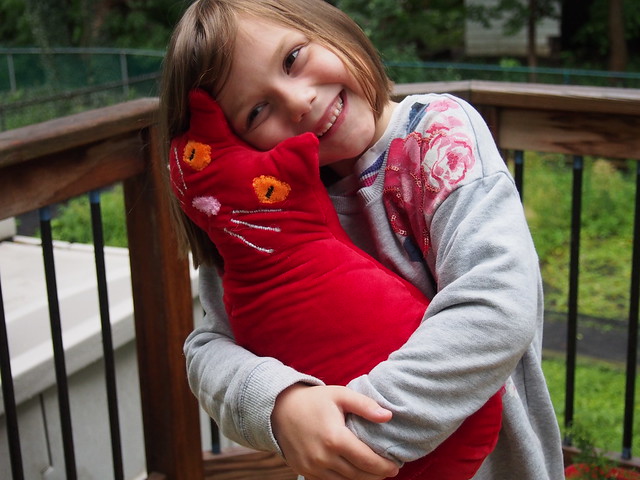 So, as background, we’re big believers in Collaborative Problem Solving, and one persistent problem we have with our dear impulsive sensory-seeker is that she LOVES to pet our cats and try to pick them up and put them on her lap, and, well, our cats are less than enthused about all of that. So, during one problem-solving session where we were discussing this issue, a proposal emerged: I would try to create a weighted kitty toy that she could carry and hold in her lap, and it needed to be soft like kitty fur, so I’d make it out of minky.

This was our sketch: 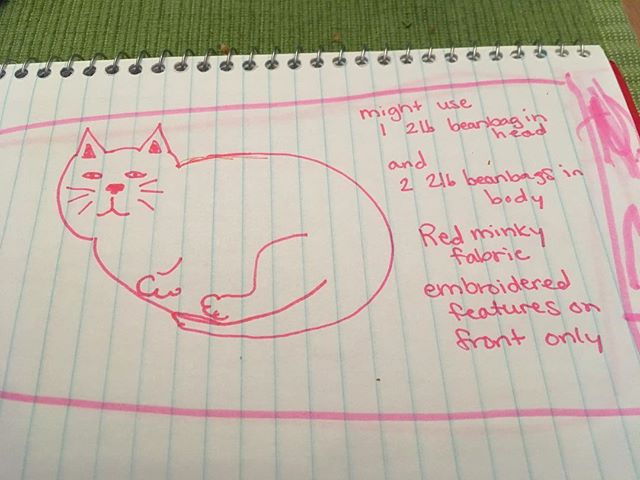 As you can probably tell, the end result was a bit, um, wonkier than the original sketch, but let’s just say I would be very, very happy to NEVER SEW WITH MINKY EVER AGAIN, OMG. I was a bit crazy to commit to this project knowing that my sewing machine is currently non-functional – this is 100% hand-sewn, including the inner pockets containing the weighted beads. I probably stabbed myself at least 100 times in the process. 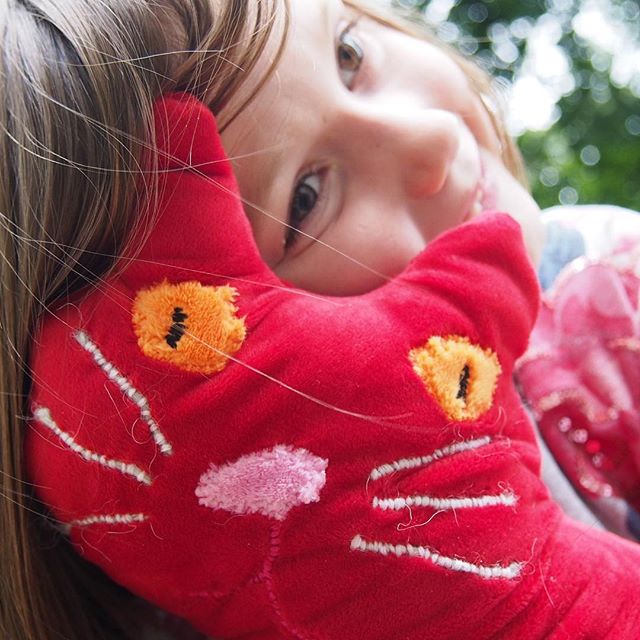 Here’s a closeup of the kitty’s face. I used scraps of minky for the eyes and nose, and couching to do all of the rest of the embroidery, because it was the only way I could figure out to make the embroidery actually stand out on a minky background. I couched down a double-thick line of Lett-Lopi (in grey for the whiskers, and red for the mouth and other features) using embroidery floss (white for the whiskers, and hot pink for the mouth and other features). This was incredibly hard to do because of how slippery the minky was. Hence the wonkiness. But hey, it’s kind of charming, and the recipient? 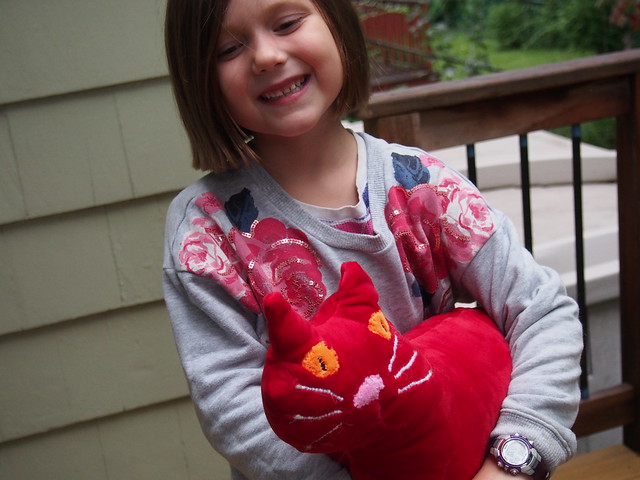 She could not possibly be more delighted with her new weighted kitty, who she has named “Sweetie Heart”, and she says she wants to throw me a “thank you party” for making it for her. That’s pretty darned gratifying! (I still would like a LONG moratorium on minky-based sewing projects.)

In the end, Sweetie Heart weighs about 5 pounds, and is stuffed with a combination of poly pellets (which are inside pouches that are also made from the red minky) and regular poly filling, and I have to say, it feels pretty darned amazing on my lap, too: 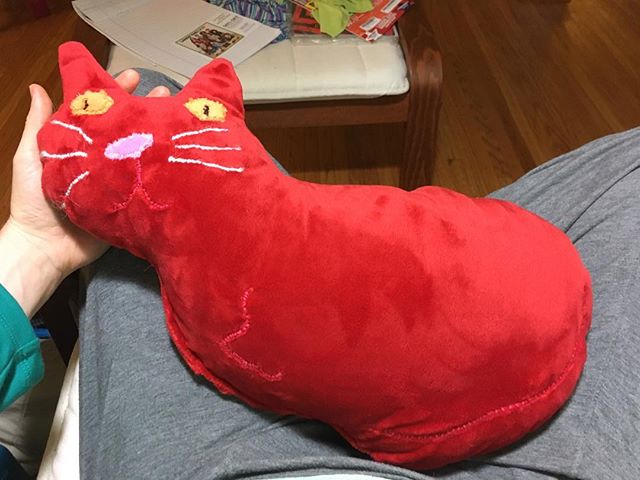 When this kitty is on my lap, I feel this incredible sense of calm and peace in my body. I don’t think M got her sensory processing disorder from nowhere – I’m definitely an SPD person, too. And feeling the incredible difference it made to have this in my lap makes me wonder if I should get myself a weighted lap pad to use while I’m working. I’d also love to have a weighted blanket for sleeping, too. I think I’ll let someone else make those, though!