Well, summer is almost over. I mean, I know it’s only mid-August, but that’s when I start needing to be back on campus just about every day; tomorrow I’ve got an all-day advisor training thing to do, and I have meetings coming up for the new instructor mentoring stuff that I do, and plenty of prep-work to do for the coming semester, so the days of being at home and able to make both music and things all throughout the day are coming to an end.

But to be honest, a lot of that actually ended the last few weeks, when my daughter didn’t have any camp, and it was just the two of us home together, all day. Some of that time was lovely, and some of it was…not. And I definitely didn’t cope well with having my days dictated by the whims of a very creative, hyperactive child who has no impulse control or frustration tolerance. It turned out that she really enjoyed listening to me practice my Bach Sonatas and Partitas, and my ukulele, so music kept going throughout that time, but the making of things? Not so much.

It’s not all because I was home with a kid, though…it’s also the heat. I severely overestimated how much knitting I’d be able to do this summer, because I severely underestimated just how unappealing knitting would become in a house without air-conditioning, especially given the unusually hot and humid summer we’ve had. When it’s 85 degrees and 88% humidity inside your house, trust me, you don’t want to be handling wool – that’s a recipe for felt!

Embroidery was more doable on the hot days, and I could occasionally sneak in some time for stitching while my daughter played games on her tablet, so I did manage to finish my Dropcloth Sampler. I’m pretty tickled with how it turned out! 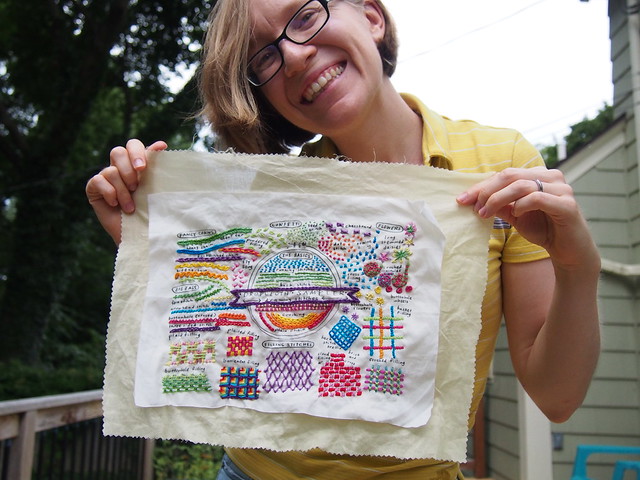 I haven’t decided yet whether I want to do something with the hoop in the middle – I might cover the lines with couching? I just can’t decide. I also don’t know what to do with this now that I’m done. Do I want to frame it? Do I want to somehow turn it into something like a bag or a pillow? No clue. Here are some closeups on some of the new stitches I learned towards the end: 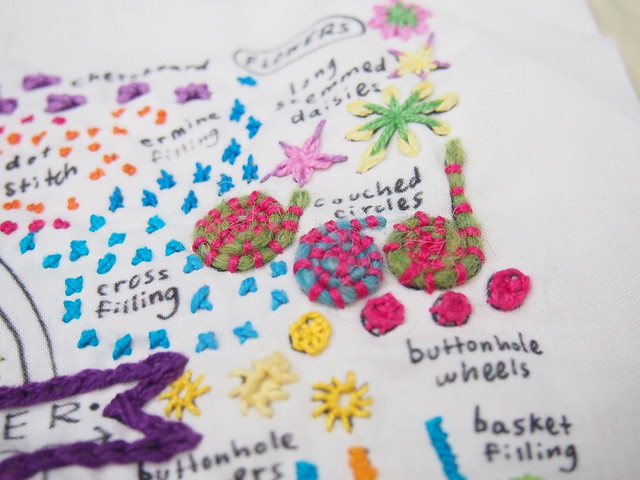 I absolutely adore the way couching looks, especially with the contrast between the wooliness of the Lett Lopi and the shininess of the perle cotton. 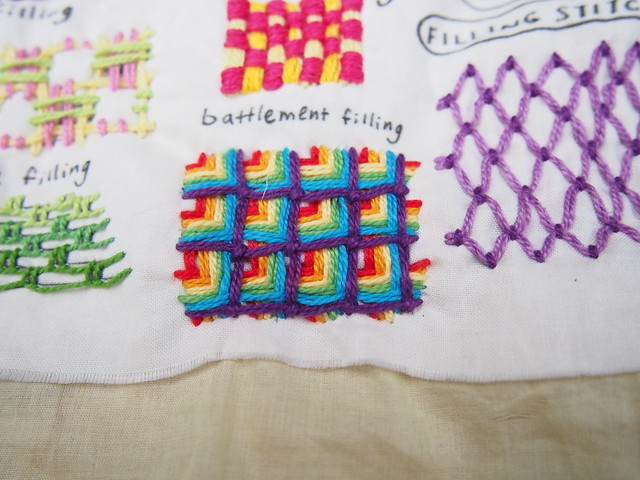 Battlement Filling was really fun to learn! I notice now that I left out the vertical green in the rightmost row…oh well! It still looks cool! 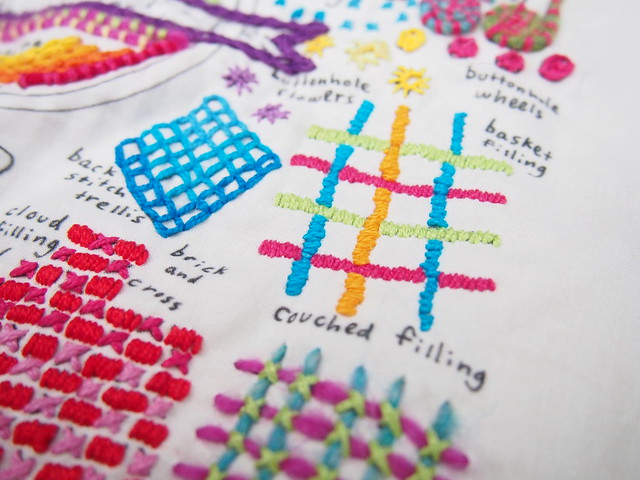 And I really love the way the Basket Filling turned out, too. Really, the whole thing turned out very cool, and I learned so much. So that was a huge win for the summer.

But on the knitting front? Gosh, I didn’t come anywhere close to accomplishing what I’d hoped to. I mean, for one thing, I thought I might write up patterns for some of my backlogged designs, and I’ve made absolutely zero progress on that. (That’s definitely not a thing my brain can do when I’m being interrupted every 30 seconds by my kiddo!) And I’d also hoped to knit several sweaters, and, well… 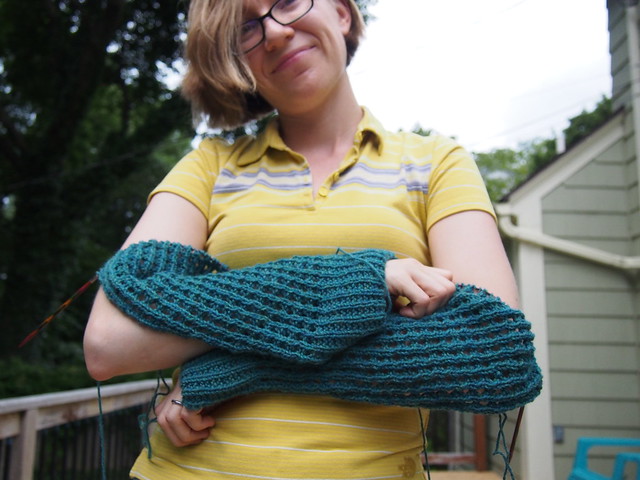 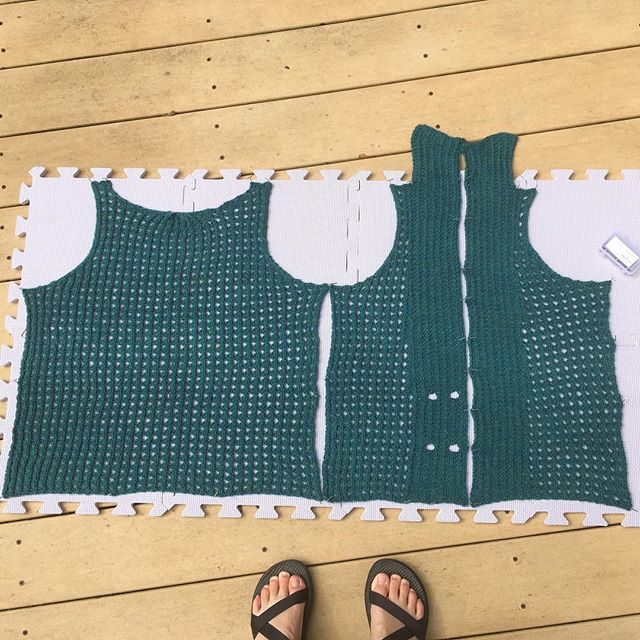 And I’m knitting both sleeves at the same time, mostly to reduce the chance that I put increases in different places on them or count wrong somehow, but also because I *know* I’d be struggling with Second Sleeve Syndrome if I didn’t. But I’m kind of struggling with Sleeve Island regardless. I just want to finish this sweater and move on to something else! I have so many ideas for my own designs, and also so many patterns I’d like to knit, and I’m kind of frustrated that I wasn’t able to get to them this summer. But they aren’t going anywhere, I suppose. Everything just takes a bit longer than I think it will. 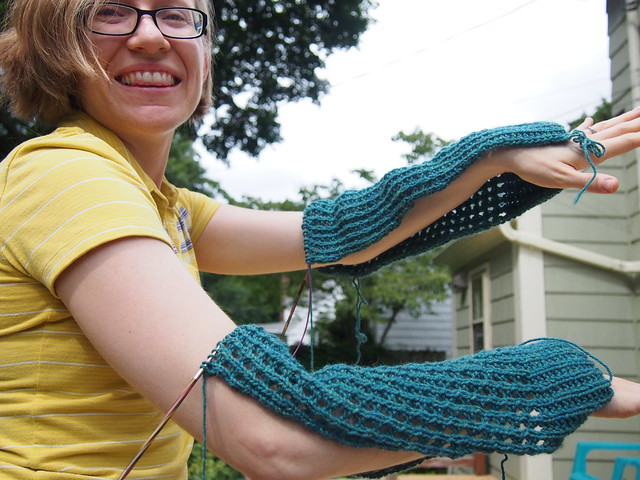 Isn’t that the classic “Academic in the Summer” lament? We all seriously overestimate what’s possible to do in the couple of months when we’re not teaching. And this year, add in all of the emotional upheaval, both relating to my former department and to M’s schooling needs which resulted in us moving, and, well, is it any surprise that I’m feeling kind of exhausted and burnt out? We’re still not fully moved into our new house! I’ve never been very good at slowing down and resting, and the circumstances of this year have made it so that resting wasn’t even really an option at all and, well, the result hasn’t been very pretty. This year has just been a lot. (And yes, I’m such an academic that to me a “year” goes from September-August.)

Here’s hoping that in the coming year, I can keep learning and making all through the year, even if it’s at a slower pace than I wish. And then maybe I won’t feel so much like I need to cram 8 million things into the couple of months I’m not teaching in the summer. Why am I even in such a rush, anyway? I think it’s because, much like my daughter, I am full of ideas and get frustrated when I can’t make all of them real right away. I’m just slightly better at managing that frustration. Creativity is a gift and a bit of a curse, too.

So this is my reminder to myself that there is no rush, that if an idea is important to me it will keep. I’ve been dreaming up embroidery designs of neurons and synapses for a full decade, and I only just this summer actually learned how to embroider, and those ideas haven’t gone away…now I just have a better sense of how I can realize them. I mean, heck, I still have a violin-cello duet banging around in my brain that I first started composing in high school. I haven’t forgotten it, it’s just kind of developed more. It plays in my mind every now and then just to remind me that it’s still there, and one of these days, maybe I’ll find a way to write it down. I’ll get to my knitwear design ideas eventually – after all, the designs I favor tend to be pretty “classic” but sometimes with a playful twist, and that’s probably never going to go out of style. There is time.