Now that I’m not traveling, I can get back to my sweater knitting, and I’ve got a finished right front of Perfin to show for it! 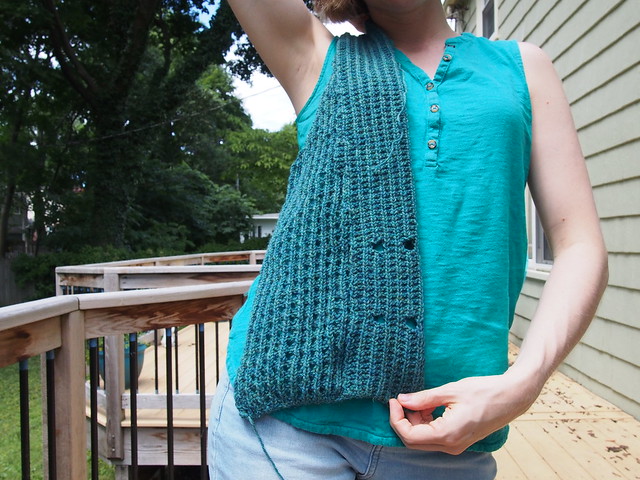 It’s a bit more curl-prone than I would’ve expected, given that the base of the stitch pattern is a garter rib, but hopefully that’s something that will be resolved with blocking and seaming. 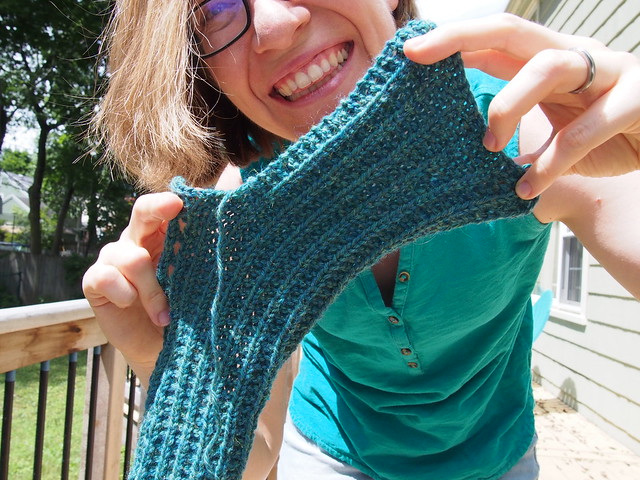 I’m anxious to see how it all comes together – knitting things in pieces is just not my usual process and I’m a little nervous about my seaming skills, especially for attaching the collar extensions to each other and the back. I don’t want it to look crappy! But I do think I’ve learned quite a bit more about how stitches work, like, the basic geometry of it all, since the last time I seamed a sweater, so I’m hopeful that deeper understanding will help me to seam it together well.

I’m already about 4 inches into the left front, so I’ll probably be done with that by the end of the week…then it’s just the sleeves, the blocking, and the seams! And then it’ll be time to cast on for my next sweater of the summer. I’m thinking it will be a Tensho pullover, except I’m torn between knitting it as a pullover, or steeking it to make a cardigan. I saw that someone had done that on Ravelry, and I do tend to get more wear out of cardigans, though that’s less true now that I don’t have a nursing child in the picture…chest access just isn’t a necessary feature anymore! So I’ve not decided yet. I’ve got enough Cascade 220 in “Aporto” to be the main color, and a skein of “Summer Sky Heather” that I think would be really lovely as a contrast color, so at least I know what yarn I’ll be using! (What I’ve learned recently about Cascade’s politics makes me uncomfortable buying yarn from them in the future, but I’ve got *quite* a stash of 220 and Eco Wool to knit through, and there’s no sense wasting it.)

I’m hoping to knit at least one more sweater after Tensho this summer, before my schedule fills up again with the start of Fall Semester. I’m trying to do a better job of managing my time and not overscheduling myself, and I’m hopeful that this year will be less crazy than this past year. There’s still plenty of work to do to get fully settled into our new house, and the fallout from the situation with my former department still rumbles on (and my husband still needs to find a new job!), and the national and international news shows no sign of getting less insane, either, but at least we won’t be MOVING in the middle of the school year, and that’s something.