I mentioned in a previous post that one of my goals for the foreseeable future was to turn as much of my stash as I could into sweaters. Here in Western NY, the climate is such that for at least half of the year (from October through April), it’s sweater-weather, at least for someone like me who is bad at thermoregulation. And even though I’ve already got a decent number of handknit sweaters, by late April, I’m getting really tired of the ones I have in rotation. I also have an absolutely ridiculous stash, some of which even pre-dates moving to NY. So making more sweaters from what I’ve got makes a lot of sense. 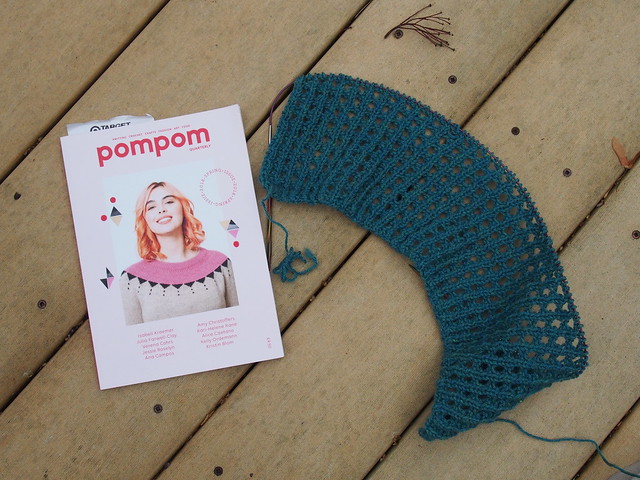 When I saw the Perfin pattern in pompom magazine‘s Instagram feed, I was smitten; I really like this sort of “professor”-style cardigan (maybe because I *am* a professor?). And then I saw Vita de Vie, and I decided I’d buy a copy of the magazine (the first knitting magazine I’ve purchased in AGES!) because both looked like sweaters I’d like to wear. I’ve had a sweater’s worth of Knitpicks Telemark in “Tidepool Heather” in my stash for over a decade now, and though it was listed as a “sport” weight, it’s really more of a DK or even light worsted, so I thought it’d be perfect for Perfin (which calls for DK). And for Vita de Vie, I thought my beloved Beaverslide 2-ply Sport/Sock yarn would be perfect. I have 3 skeins in “Prairie Sandreed” in my stash that I think would be lovely in that pattern, but a couple of years ago, one of my cats got to one of them and “loved” it into a tangled, partially-felted mess. I spent a good chunk of yesterday detangling it and winding the parts of it that I could into balls, and in combination with the intact skeins, I think I will have enough for Vita de Vie, too! But back to Perfin, for now: 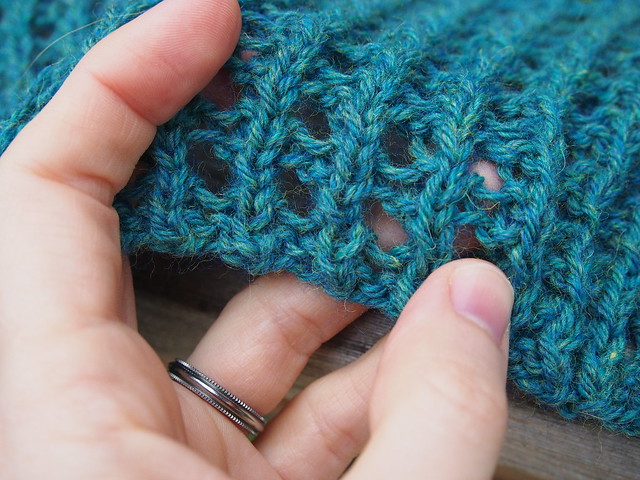 I haven’t followed a magazine pattern in over a decade at this point, and I’ve almost never successfully finished a sweater that is knit in pieces (I think that honor goes to Demi, which I never wear, because as lovely as it is, it just doesn’t suit me), so this is going to be an adventure! I got tripped up by my lack of practice reading magazine-style pattern instructions (they’re…terse) and had to rip out my first attempt, but once I figured out what the pattern was asking me to do, it’s been smooth sailing! The stitch pattern is actually quite simple to memorize, so I can fly now! 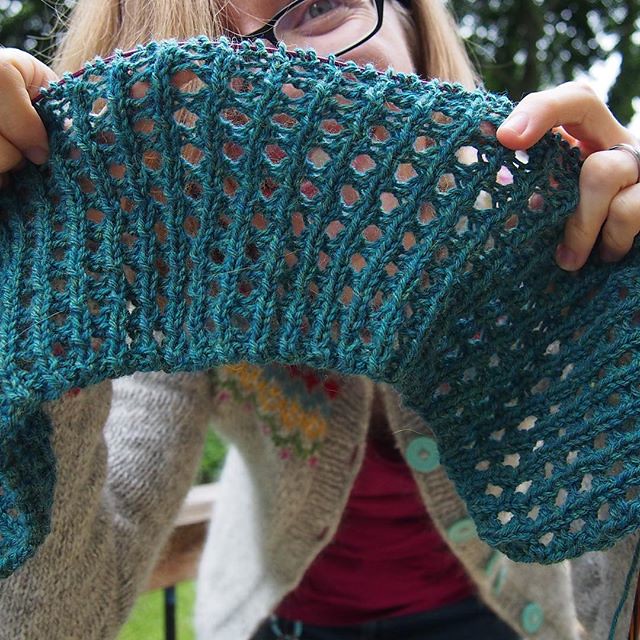 I’m very curious how warm this sweater will actually be, given that it is mostly holes. But I like the look of the “mesh” (it reminds me of my Thalia shawl), and it IS wool, so I’m sure I’ll be able to wear it at least some of our colder months.

In a couple of weeks, we’ll be heading up to Wisconsin to visit my family, and I’m not sure what projects to bring with me – as much as I’d love to work on a sweater while I’m on vacation, I’m not sure that’s compatible with packing light, so my tentative plan is to knit as much as I can on sweaters until then, not touch my current Willow Cowl, and then work on Willow Cowls (since I have at least one other skein I’d like to turn into one) while I’m traveling. But we’ll see!

1 thought on “and for my next sweater…”