I’m about to head out to Kansas City for the 2018 CCCC Convention, presenting in one of the Wednesday afternoon workshops (AW.12, if anyone reading this is also headed to 4C’s!) and this year the weather isn’t going to thwart me! (Oh hey, I should actually weave in the ends and sew a zipper on that sweater I was wearing in that post last year!). Last night, as our last mama-daughter activity before I’m away for 5 days, M came with me to Knitting Guild so that she could Show & Tell her Octopus Yoke sweater. 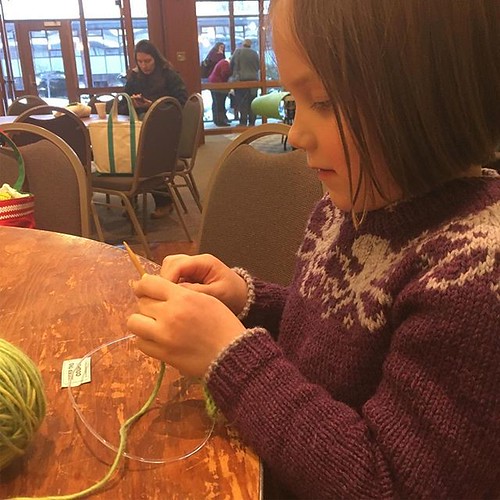 Because everything is still a crazy mess due to the move, I couldn’t find her knitting bag (of course, I found it first thing after we got home!), so I hastily cast on a new project for her using a lighter color green of the same yarn (which I found in a desk drawer) and the only set of unoccupied needles I could find, which were circulars. She’d never knit on circulars before, only straights, but she took to it like a champ, and knit 6 full rows of garter stitch! 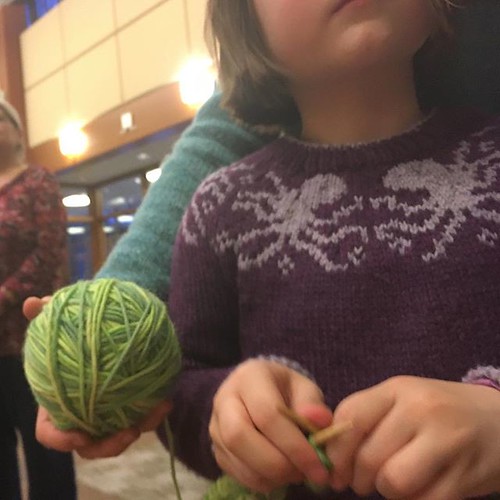 She was so into her knitting that she didn’t even want to stop when it was time to stand in line for Show & Tell, so I held her yarn for her so she could knit standing up. She’s such a little pro! 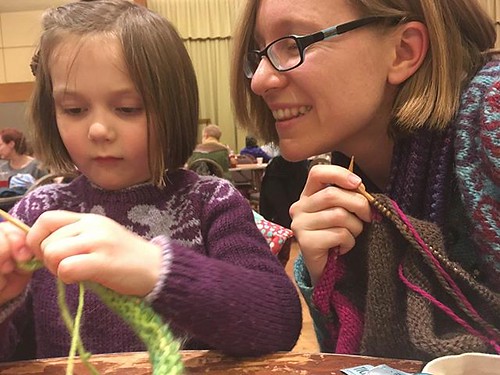 It was really nice to get to spend a little bit of time knitting together with M and my friends before I head out of town for a few days. That project I’m working on is my new sweater, by the way…a Winter Traveller in brown and hot pink Cascade Eco Wool. When I finished M’s sweater, I wanted to cast on for something new for me, and I decided I would knit the sweater in my queue whose yarn I could find first, and my Eco Wool bin was the first bin I found, so here we go! It’s my first intarsia project since I first started knitting, and I had to rip and reknit a couple of times when I started the “intarsia in the round” section because it looked like a hot mess, but I’ve got it working now and I’m so excited about it! 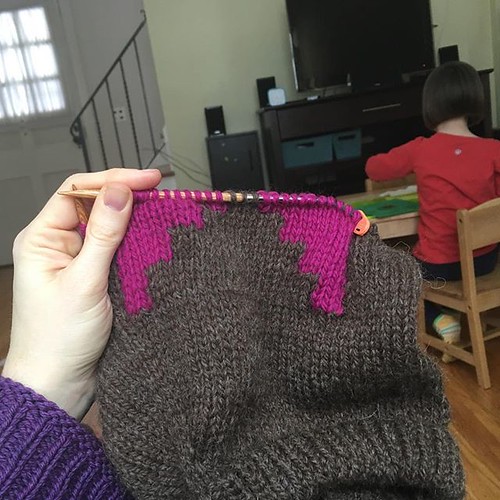 It’s actually quite a bit further along now than in this picture (I’ve got the sleeve stitches on waste yarn and am knitting down the body now), but you can get a good sense of how the pink and brown work together from this shot. I’m loving it so much! 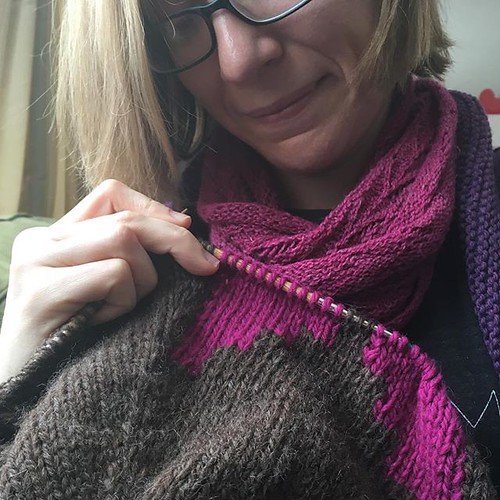 I got a kick out of the fact that the pink of the Nordic Star perfectly matched the pink cowl I was wearing one day when I was knitting it…I’m consistent! It’s pretty much the only pink I’ll wear, but I wear it quite a lot these days. 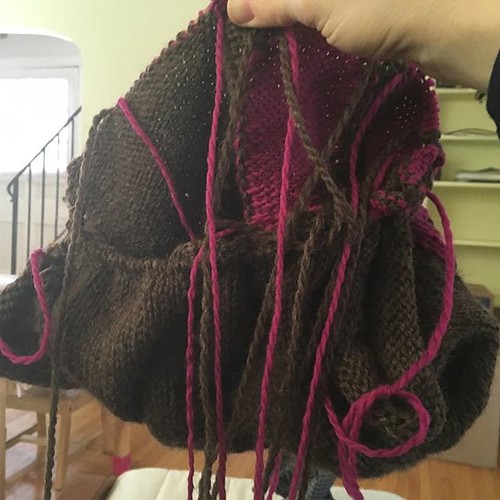 Intarsia means having SO MANY bits of working yarn, but I’m trying to just roll with it instead of letting it drive me crazy. I’m not bringing this project with me to Kansas City, alas – just too big and bulky to be a good travel knit, so I’ve got yarn and needles packed to make another Willow Cowl if I get any time for knitting while I’m away. (I may not – I have an absolutely ridiculous amount of feedback to be giving on student work while I’m away!)