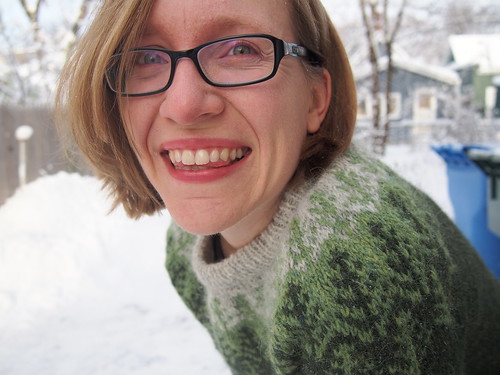 Ravelry Project Page
Pattern: Skógafjall, by Dianna Walla
Yarn: Lettlopi, in the colors the pattern called for
Needles: Size 6 for ribbing, size 7 for everything else
Time to Knit: I started it ~6 months ago, but I knit like, half of it while home by myself over Christmas!

I’m SO delighted with how my Skógafjall sweater turned out! I deviated only slightly from the pattern – I followed the directions for the 39″ size, but my gauge was just a bit tighter (I prefer knitting Lettlopi on size 6 or 7 needles rather than 8s), so it turned out more like a 36.5″ sweater, which is perfect for me. And I modified the neckline, knitting the ribbing twice as long so that I could fold it over and stitch it down for a doubled collar, and I *LOVE* it! 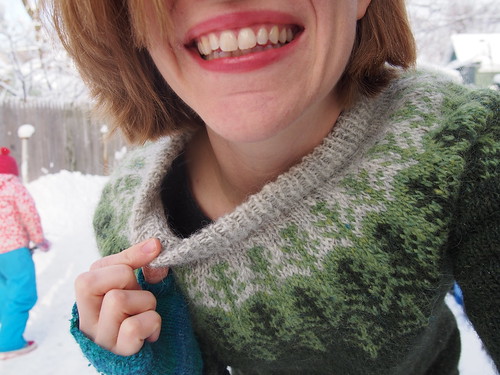 I am just madly in love with the tree pattern in the yoke…I love trees! 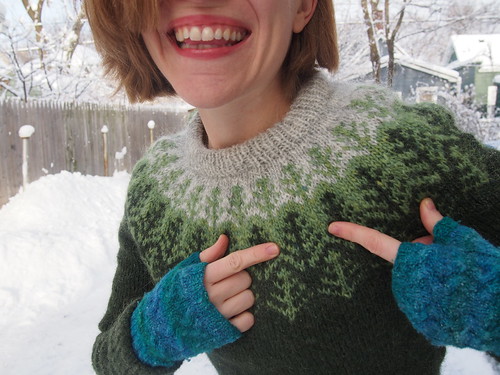 It’s pretty unusual for me to so closely follow a pattern, even using the recommended yarn in the recommended colors – I actually can’t think of any other time I’ve done that! And while I’m incredibly happy with the finished result, it does feel slightly less…”mine”…than other sweaters I’ve knit. I was reading Dan Ariely’s “The Upside of Irrational” while home by myself over Christmas, and one of the things he was writing about was what he called the “IKEA-effect”, by which he means the way that we overvalue the things that we make ourselves. And I think for me, what makes a sweater feel “mine” in the sense that I take pride in it, and don’t feel awkward when someone compliments me on it (and maybe “overvalue it” in the way that Ariely talks about), is that I designed it myself, or did something especially unexpected with a design that someone else created. I think I don’t take any special pride in the knitting itself (which is probably silly of me – it is, in fact, a skill!) but in the aspects that (to my mind) are more “creative”: designing, and to a lesser extent, modifying or choosing a color palette. I suppose I do value my own handknit sweaters, even one like this one where I pretty much exactly followed the pattern, over sweaters that aren’t made by me – I wouldn’t want to buy a sweater like Skógafjall, I’d want to knit it myself. But there’s something extra-special about the ones I design myself, and perhaps that’s as it should be. 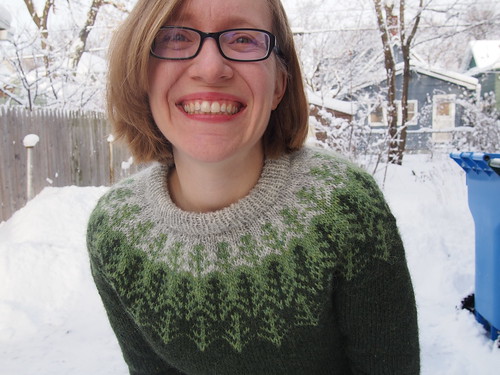