This morning, I finally finished the second Willow Cowl that I cast on months and months ago…I think back in March, if my Flickr photos are to be trusted? It got set aside for sweater-knitting this summer, but was picked back up these past couple of months as a life-stress coping device (for me, the Willow Cowl pattern is GREAT for a mindless, soothing project!) 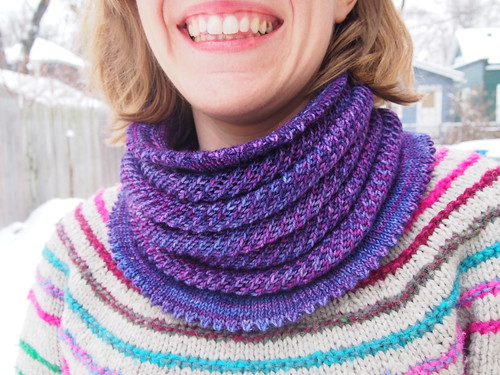 I’ll say more about the life craziness in a second, but first, how about more pictures and project details? 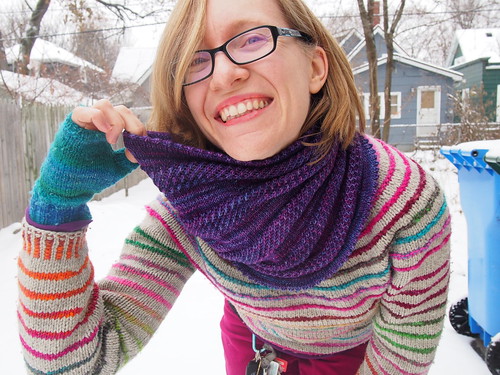 I really love the Willow Cowl pattern – the way the plain stockinette stripes and the eyelet-based stripes create that stacking effect is just so clever and pretty! 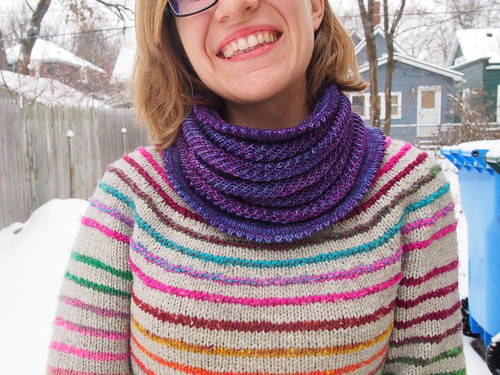 So, about the life crazy. Well, things have been crazy enough just being a social justice-oriented, caring person here in the United States, but since September, there’s been a whole lot more added in. We’ll start with this article, which hit the press while I was away at a conference. The lecherous professor in question? That’s my husband’s boss. That’s the department in which I was a Ph.D student from 2006-2014. And I’m one of the now-16 women who’ve contributed testimony describing the ways in which we reshaped our research and careers to avoid working with him because of the kind of behavior described there. So…that’s been interesting, and infuriating, and just a huge confusing mix of emotions – embarrassment that my former department and my university have handled these things so poorly, pride in my brave friends and colleagues who are speaking up, stress about making sure my husband gets into a better job, and just a whole lot of grief over the whole situation. And it’s been wild having these issues hit the mainstream with the Weinstein stuff and the #MeToo movement – it’s both wonderful and awful to have these things out in the open while also dealing with it up close and personal at my workplace.

That seemed like enough to be dealing with, but when it rains, it pours. In mid-November, we had an IEP meeting for our dear M, and the take-home message was that her Montessori school, where she’s been since she was 8 months old, and where the teachers and the whole community there are like family to us…well, things weren’t working well for M there. I think I’ve mentioned here that she’s been formally diagnosed with ADHD, Sensory Processing Disorder, and Anxiety (which manifests itself in OCD ways). She was getting services at her school, but they really just didn’t have the resources to support her needs. She was getting her services through the suburban school district in which her Montessori school is located, which is one of the top school districts in the country, and is renowned for how it handles 2E kids like M, but we currently live in the city, which is…not. So this set off a frantic few days of researching schooling options, and starting the house hunting process in case we decided that moving was the only way to get M into a school environment where she could be supported and thrive. Well, by the end of November, we’d found a house in a very walkable part of the suburb (only a couple of miles from our current house, and within walking distance of many of the same places, just from the other direction)…it’s beautiful and perfect for us and has a lovely deck and backyard that M can run around in…and we’ll be moving at the end of January, and M will start at her new public school on January 3rd. What a whirlwind! Oh, yeah, and the end of the semester was in the middle of that, too. And M’s 6th birthday, which we celebrated at an art studio with lots of glitter and pinecone-painting (M’s favorite activity): 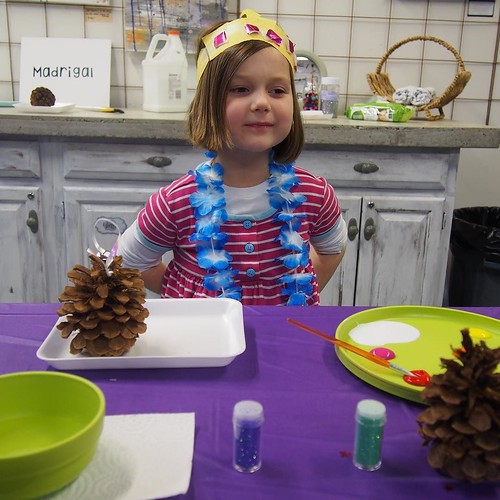 She even got to bring home a painting that her friends all helped make! 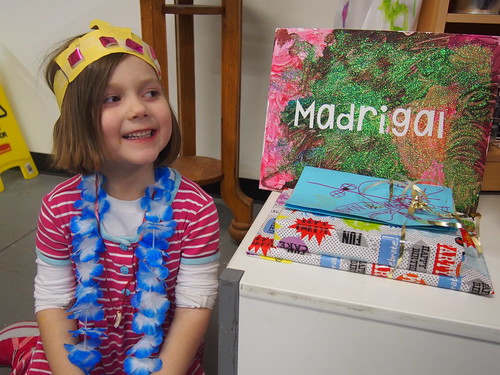 It’ll look great on the wall of her new bedroom once we move!

In the past few days, I’ve finished grading my students’ final portfolios, we’ve said goodbye to friends at M’s old school, and we’ve met with M’s new school. She’s getting set up to do half days of special education, and half days of kindergarten, and I still need to figure out after school care for the 3 days a week where I’m teaching until 3:15pm next semester (that schedule was set before any of this stuff happened!). This has been a really stressful and emotional change for all of us – M has known the people at her school for literally her entire life, and while everyone at the new school seems very nice and supportive, it’s not the same. I think this change will be a positive one in the end, but the transition is hard and there have been a lot of tears.

I’m writing this while at home, all by myself, because my husband took M to Ohio to spend Christmas with her cousin, and I just couldn’t cope with adding the stress of travel to everything else. I’ll miss them, but we celebrated the Solstice yesterday, so I got to have my holiday with my beloved little family, and now M can have a second one with her extended family and I can have a much needed break, with a few days of quiet. I’m still an emotional, anxious mess, but at least I don’t have to be one while traveling! 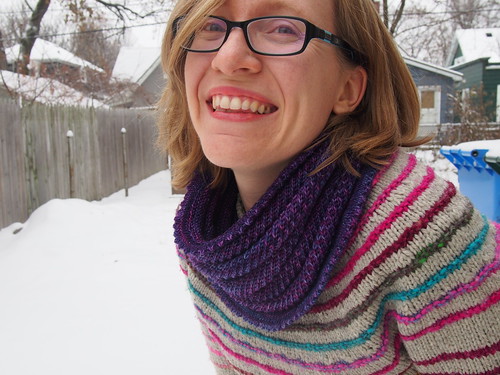 So anyway, my cowl is the first of possibly a few knits-in-progress that have been finished while I spend my days watching movies and listening to podcasts and trying to recuperate from a seriously challenging last few months.

3 thoughts on “A cowl, and a whole lot of life-crazy”