So, remember how I posted about our Halloween plans back in the beginning of September? It took a lot of work, but I made them real! 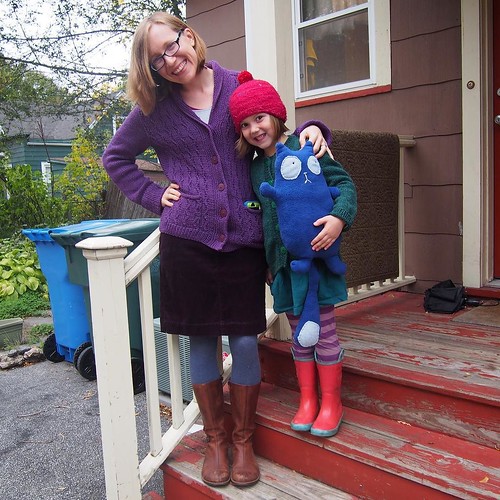 M’s green “Peg” cardigan turned out perfectly! It’s technically still not quite a finished object, because I haven’t sewn in flannel pocket linings, so the “side pockets” are really just slits: 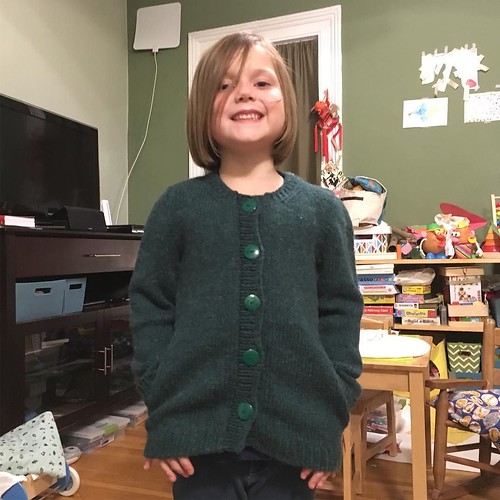 Both the pocket openings and the front openings were created with steeks, which I’m getting more confident about doing! 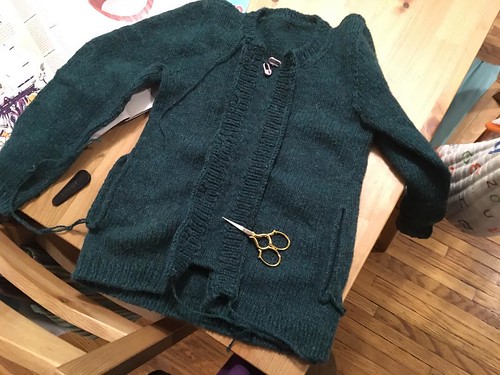 All ready for steeking!

I’m finding I have a strong preference for knitting the button bands before cutting the steek opening (I did this for my Fiddlehead Yoke cardigan, too) – I’m just less nervous about somehow making things unravel while picking up stitches when I do it before cutting. 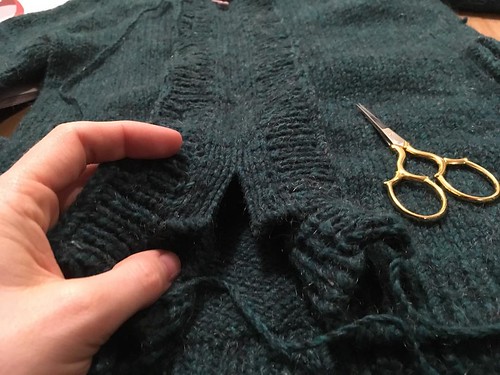 I used 1×1 rib for this buttonband, and bound off with a 2-stitch i-cord, which created a beautiful, firm, same-on-both-sides finish. I edged the pocket openings in i-cord, too, before I cut them open: 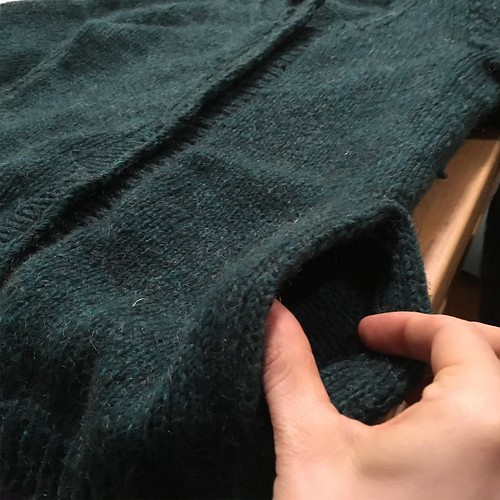 Cat was more of a challenge – I’ve never actually created a stuffed animal like this before, but somehow it all worked out! I started out by looking at a picture of Cat and drawing it much larger on some of M’s easel paper: 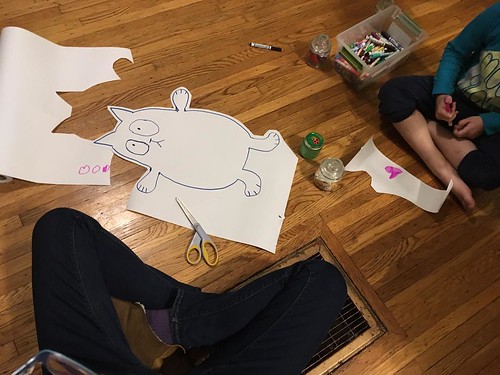 I totally surprised myself with how well I was able to capture Cat’s shape and features! Then, it was time to actually use my drawing as a pattern, and cut out shapes from blue and grey fleece – two identical body pieces (for front and back) and two identical tail pieces (to make a 3D tail). I stitched on the grey parts (eyes, mouth, and tail spots) by hand before sewing any of the body or tail pieces together: 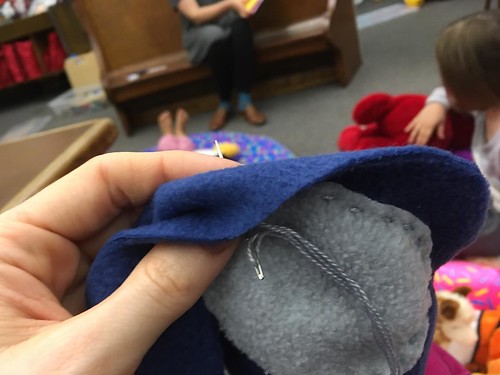 Stitching at the library

But my plans for sewing everything together with my sewing machine were thwarted by the fact that my machine just sucks (and I also don’t really know much about how to use it, but I do know how to read a manual and I just could NOT make it work without jamming constantly and breaking the thread!). So…handsewing to the rescue! I sewed the entire body together by hand over a couple of evenings: 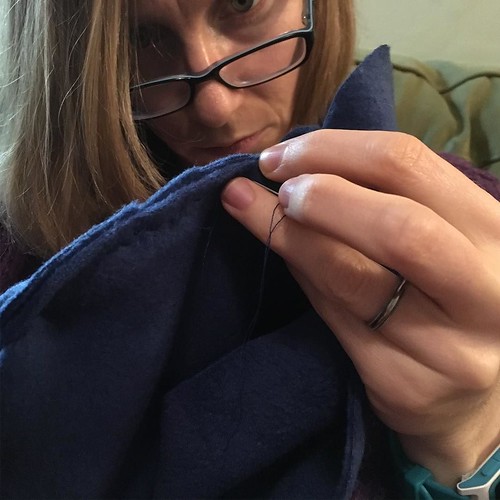 When I had it all stuffed and finished up, I almost cried – I couldn’t believe how well it had turned out! I made a Cat! And it really looks like Cat! 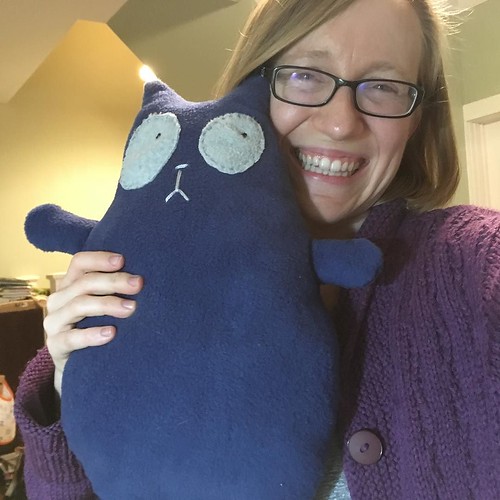 Maddy was SO delighted with her Cat! 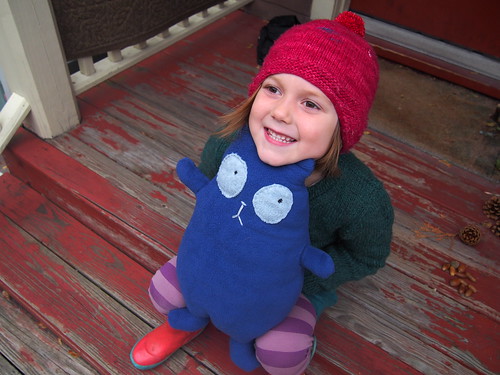 She’s been carrying him everywhere with her, just like Peg would: 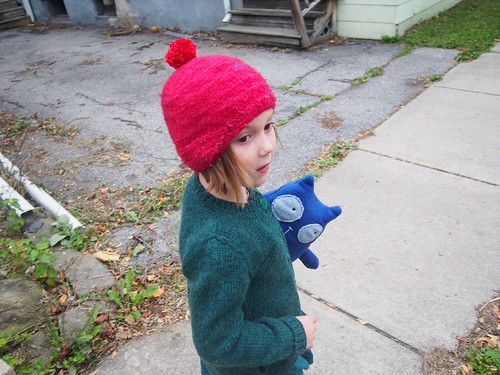 Seriously, I still can’t believe I made a Cat that looks so much like Cat! 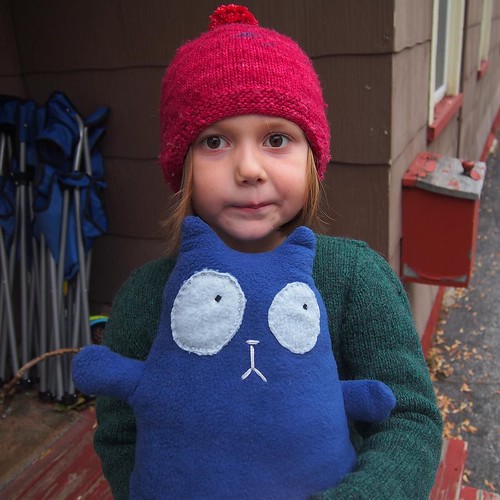 And a kid who looks so much like Peg! (Isn’t she adorable?? I’m really happy with how my pompom turned out for her hat, too!) 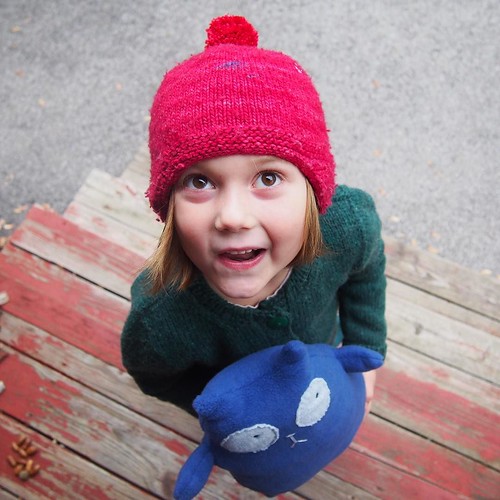 And if you want even more unbelievable cuteness, here’s a video (you’ll have to click the image to go through to Flickr) of M singing the “Peg+Cat” theme song in costume: 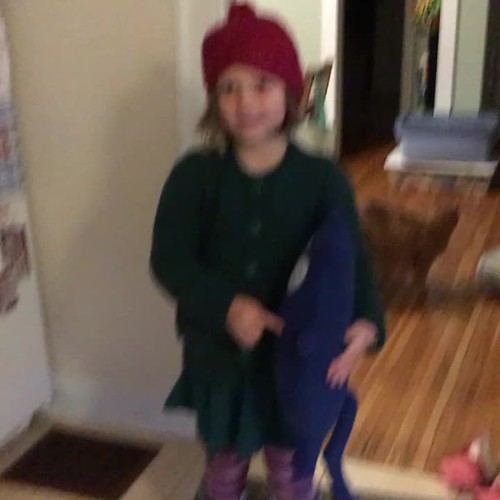 Peg+Cat were SO excited to go trick-or-treating with friends this evening! 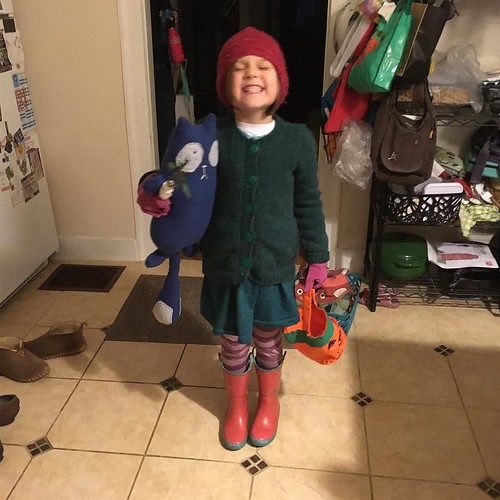 I’d call Halloween 2017 a huge success! But I’m definitely a crazy person for committing to a costume that involved a handknit sweater, a pompom, and a hand-stitched, self-designed Cat…though the awesome thing is that every single piece of her costume is something she can wear or play with again and again! M and I agreed that next year, she will take the lead on costume-making; I’ll still help her, but I won’t be a 1-woman sweatshop again!

I hope you all had a Happy Halloween this year!