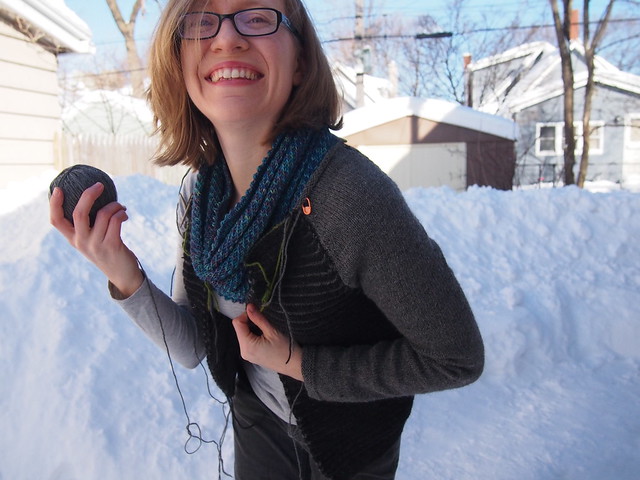 (but I do have Elle-Melle sleeve-progress to show off after I ramble about snow!)

I was supposed to be in Portland today, presenting at the CCCC Convention, but Winter Storm Stella had other ideas. But of course, as these things go, I only discovered that getting there in time to present would be impossible AFTER digging out the driveway and going all the way to the airport. Thankfully, one member of our presentation team (ironically, the one named Stella!) made it there, so I’m all set to present via Skype later today. 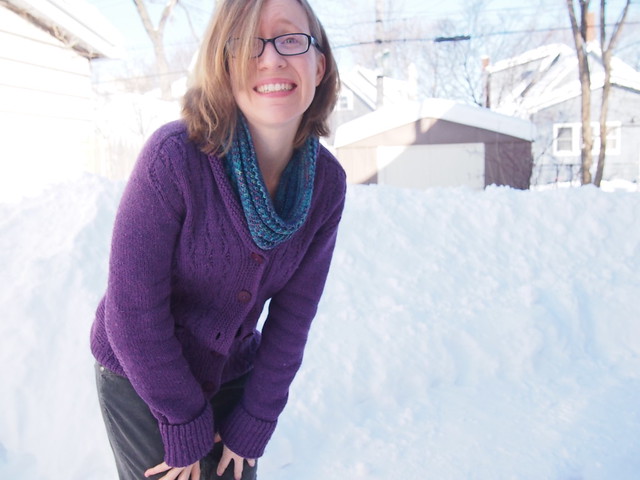 Anyway, back to the snow. Like so many folks in the north eastern US, we got quite a dumping from Winter Storm Stella. It started Tuesday afternoon and then did not let up until Wednesday afternoon. My husband and I took turns shoveling so as to make things easier, but let me tell you a fun fact about shoveling when you are getting a couple of inches of snow per hour: the air is so thick with snow that when you try to take a deep breath (because, oh, let’s say you’re out of breath from carrying 25lb shovelfuls of snow from the front of your house to your backyard because you’ve run out of room in front) you end up breathing in snow, which makes you choke and then you set off a wheezing fit. It’s FUN! But on the plus side, you do get to feel like a pretty awesome badass for moving all that snow, especially if, like me, you put on some headphones and rock out to Florence and the Machine while you shovel. This morning, I half gave up on shoveling, and just used the shovel to break up the massive snow-boulders at the end of our driveway so that I could pick them up and chuck them atop the massive 4.75 foot snow wall that now surrounds our house. 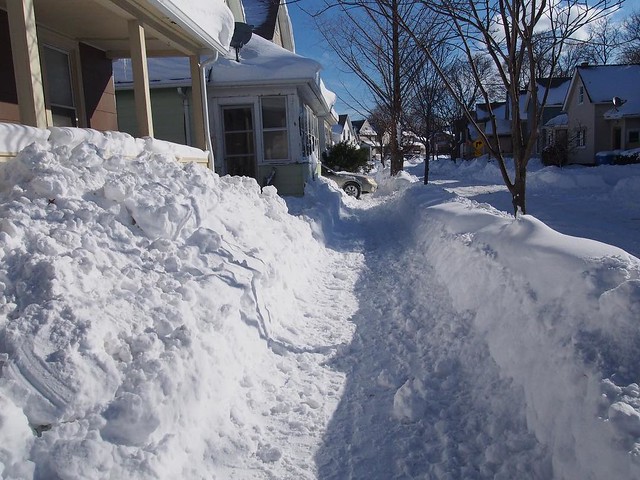 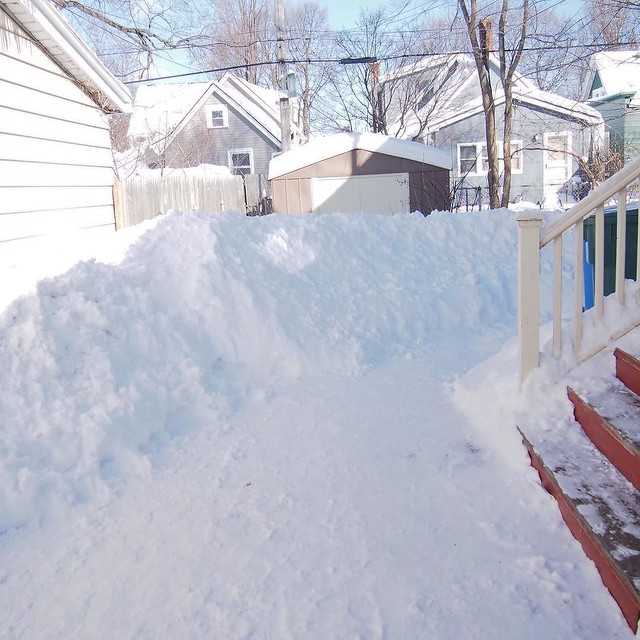 Of course, snow is TONS of (non-sarcastic) fun when you’re a 5 year old who does not have to clear the driveway and attempt to work at home during a snowstorm that follows a devastating windstorm (we got 80mph winds last week that took out power lots of places, including my daughter’s school, so we’ve now had 2 wind days followed by 2 snow days and let’s just say that’s a lot of no-school days for a household with two working parents to manage!) 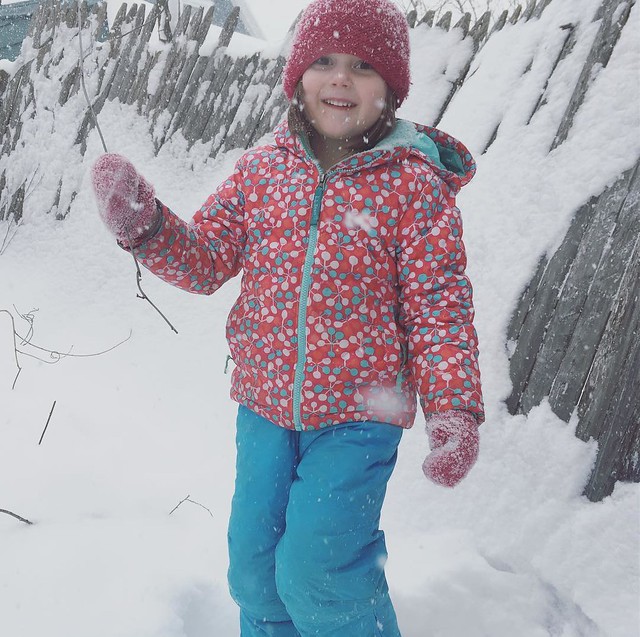 M was so happy to go on “adventures” in her snow gear with me on Tuesday, and I will say, once I gave up on the idea of getting any more work done, it was pretty fun for me, too! 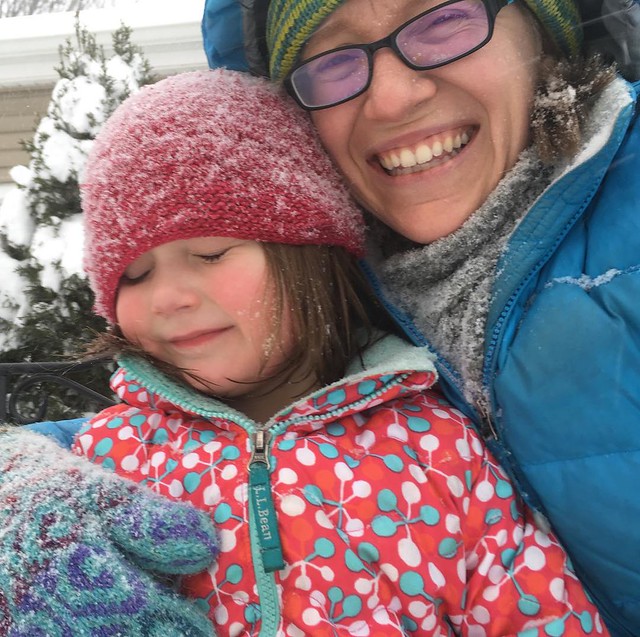 Anyway, enough about snow – let’s talk about my grown-up Elle Melle! I’ve finished sleeve number one, and picked up the stitches for sleeve number two, rendering it at least somewhat wearable, so I decided to use the beautiful snow backdrop to take some progress shots. 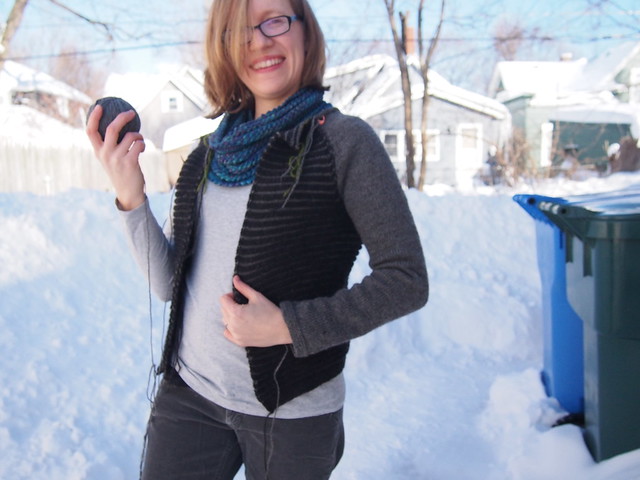 I’m really happy with how the fit is coming out – I know that after blocking, it will end up slightly longer than it currently is, so it’s looking like it’ll be pretty much perfect! Here it is from the back (and slightly out of focus, but it’s COLD and I didn’t feel like getting fussy with the camera): 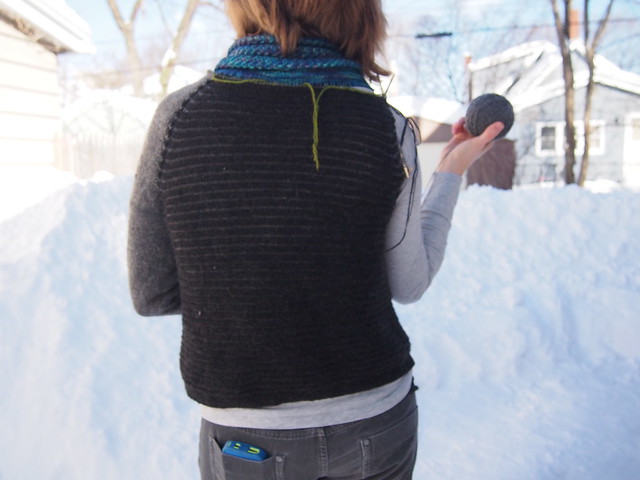 And here’s a closeup of the raglan edge – ain’t it purty? 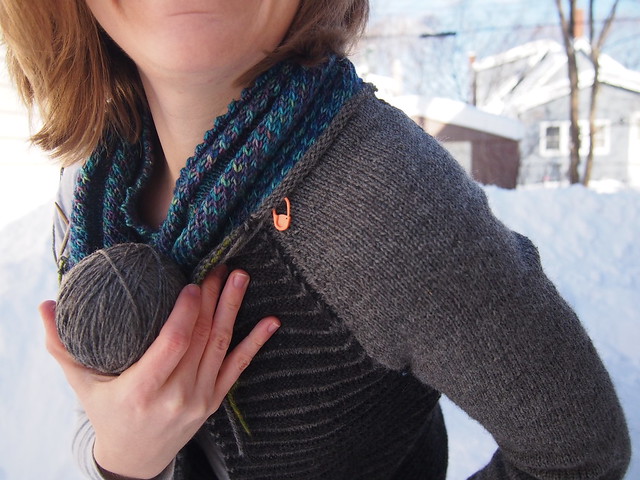 For future reference, here is what I did: I picked up EVERY stitch (from the outside leg of the reverse stockinette stitch that runs up the edge when I do my sl1, p1 edging that I talked about in my last post), and then I knit a round in which I ssk’d each pair of stitches (to cut the number in half, since the pattern instructs to pick up every other stitch) down one side, and k2tog’d each pair up the other side, and THEN I followed the pattern directions for the raglan short-rows. One other difference is that I slip the first stitch both when I purl back across AND when I knit back across (the pattern doesn’t have you slip the first stitch on the knit rows). These two things helped me avoid the gappiness that I find occurs if you follow the pattern directions exactly. 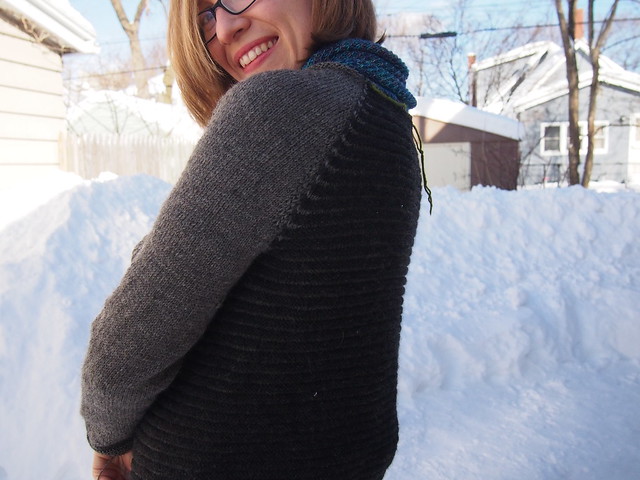 I’m just so happy with how it’s turning out, and I can’t wait to finish it – but it turns out to be terribly difficult to knit after you’ve utterly blown out your forearms carrying shovelfuls of snow for two days. (It’s also strangely hard to type, or do anything that requires my fingers to listen to my brain and not be clumsy.)

I hope you all survived Winter Storm Stella, friends! I’m sad that I’m not in Portland, but at least it’s really beautiful outside with the sunshine on the bright white coating of snow.