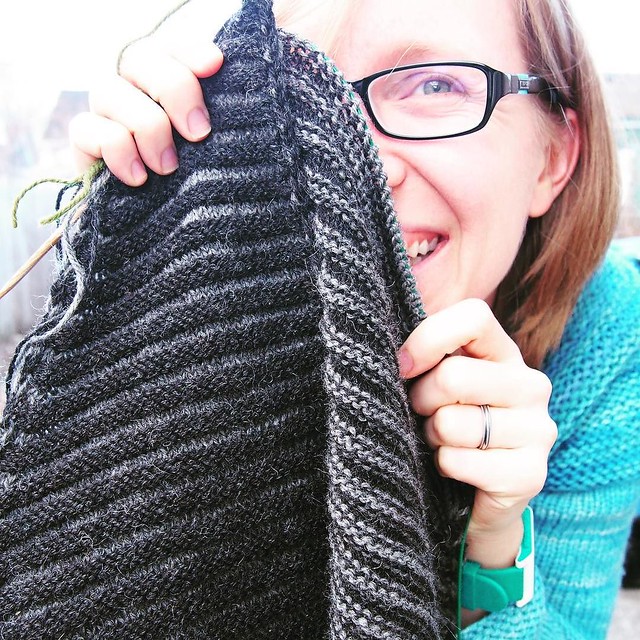 I’m making good progress on my me-sized Elle Melle now that I don’t have the Fiddlehead Mittens as my object of obsession. Generally speaking, I’m a serially-monogamous knitter, though I’ll make exceptions for having something small like a baby hat or plain mitten or easy cowl on the needles for on-the-go purposes; the Fiddlehead Mittens, with their colorwork, did not fit this bill and so became my one-and-only for the time I was knitting them. But now, my attentions are back on the Elle Melle sweater, and I’ve got a front and most of the back finished! 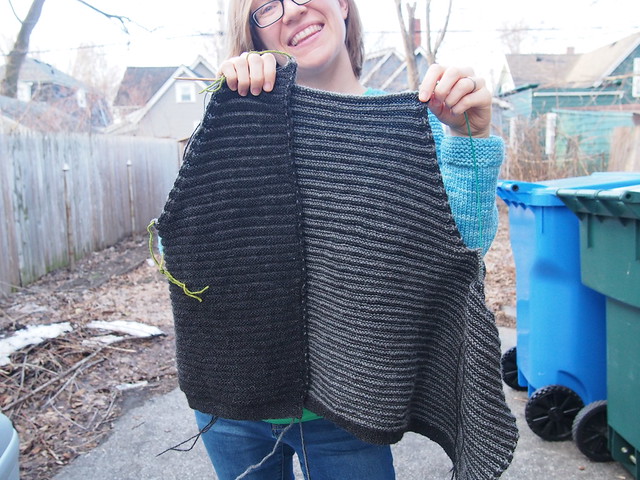 I’m really loving how this is turning out – I’m using the pattern as a guide, but redoing the math to yield a size that’s a bit bigger around, but less long in the body, than the biggest size in the kids pattern. I’m also making a few of my characteristic adjustments, like the way that I edge knits when I’m planning to pick up stitches for button bands or sleeves: 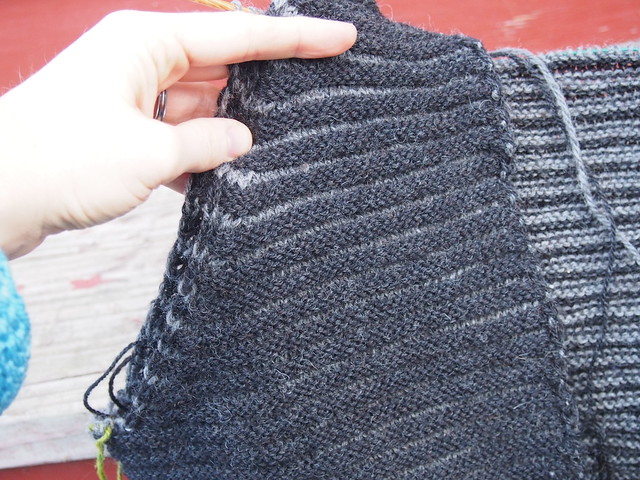 I slip the edge stitch, and then do a single stitch in reverse stockinette next to it, which creates a lovely edge, especially if I pick up from the outer leg of that little column of knit stitches running up the edge. The slipped stitch looks so nice nestled between the body and the button band, or along the raglan line, between the solid-colored sleeve and the striped body. This means I have to adjust the decreases, but I think it creates a nice line when they’re done a bit further from the edge.

My only complaint about the knitting so far has to do with the yarn. I’m using Classic Elite Mohawk Wool, and while the yarn itself is perfectly fine (it’s no Beaverslide Sport/Sock, but it’s nice enough), for some reason, my black skeins were utterly FULL of weak spots; I kind of think that the yarn got nicked by a box-cutter, because there were a lot of spots that looked like all but one of the plies had been cut. So I ended up with lots of little balls when I wound the yarn from the skeins, and then while knitting, discovered more spots (and often had to unknit back to give myself enough of a tail to weave in). So many ends! 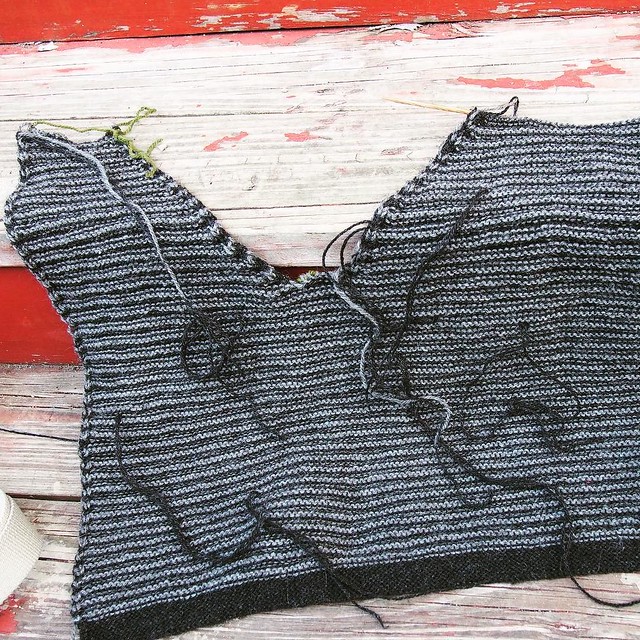 I think it’s going to be a great sweater in the end, and I don’t even mind end-weaving all that much, but gosh, if I’d’ve known…well, I might’ve gone for the Beaverslide Sport/Sock instead. I had gone back and forth about it when I was planning this sweater, and decided to try the Mohawk in hopes that the nylon would give it a bit more sturdiness (and also because the Mohawk was on sale!), but alas, all I’ve got is a mess of ends and no chance of the glorious blooming that happens with the woolen-spun yarn. And for a woolen-spun yarn, Beaverslide Sport/Sock isn’t even THAT delicate, I think thanks to the mohair that’s blended in. Ah, well, they can’t all be winners, and I’ve got some Beaverslide Sport/Sock for a me-sized stripey pocket sweater, anyway, so I’ll get to knit with the good stuff again :)

6 thoughts on “making progress on Elle Melle (for me!)”