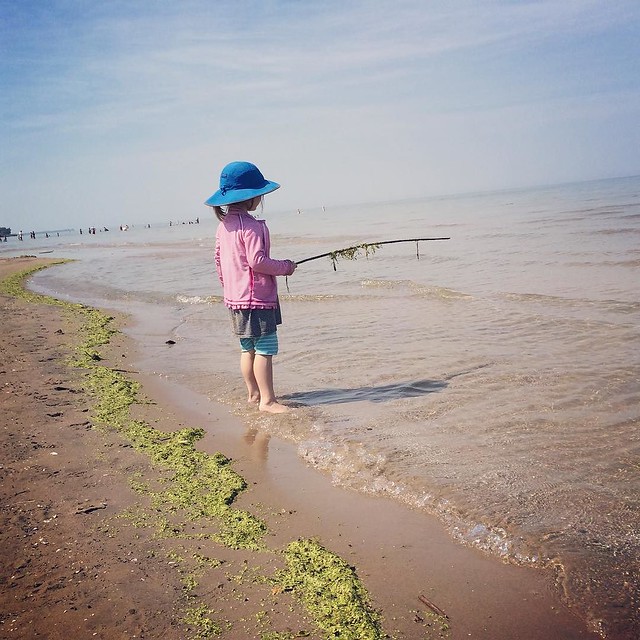 Fishing for Algae at Lake Ontario

I had grand intentions of keeping the blog updated regularly throughout the summer, but life had other things in mind. This summer was quite a bit more emotionally taxing than I’d anticipated, especially on the parenting front. We now have a much better understanding of how our sweet daughter ticks, though, thanks to a series of assessments she’s had; she’s incredibly bright, and very sweet and thoughtful, but has some fairly major sensory processing issues, as well as some fairly extreme delays in executive function (think: stuff like impulse control, attention, emotion regulation, frustration tolerance – we’re probably heading towards an ADHD diagnosis at some point), including some retained infant reflexes that ought to be interfering with her motor abilities, but she’s such a smart little cookie that she compensates incredibly well for them – so well we’d never have noticed if it weren’t for a very observant OT. I’m learning a lot about how to work with a kid who is as smart as a 6 or 7 year old, but has the impulse control of a 2 or 3 year old, but it ain’t easy, and it’s definitely emotionally taxing (and sometimes physically so – I nearly got my jaw busted open at one point this summer, and I’ve had to forcibly carry all 46lbs of her out of group violin class several times). I’m always torn about how much to talk about this stuff, because it’s M’s story, too; I want to be very respectful of her and her right to tell her own story while still being open about my reality as a parent, and that’s going to become an ever-more-challenging tightrope to walk as she gets older. 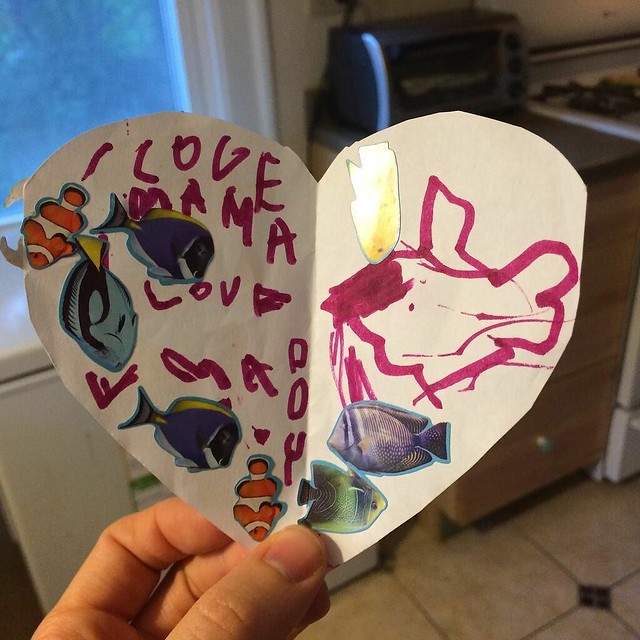 Sweet child, I’ll never tire of the cards you write for me!

I do want to recommend a really great book called “The Explosive Child”, which offers wonderful strategies for helping parents work with children who have some “lagging skills” (to use the book’s language) that make it so that they cannot handle challenges adaptively, but instead have maladaptive explosive meltdowns. You can find more here on Dr. Ross Greene’s “Lives in the Balance” site. He advocates a respectful collaborative problem solving approach that I think would work well for any child, but especially for those on the “not-neurotypical” end of the spectrum.

One example of the “collaborative problem solving” approach in action for us has been the “ticket” approach that M helped come up with for violin practice. She actually really likes playing violin, but switching tasks is a huge “lagging skill” for her, and so she needs an extra push to actually practice when it’s time to practice. We’d been “pushing” by taking away her breakfast time TV-watching (she’s REALLY into “Puffin Rock” right now!) if she didn’t practice, which caused massive meltdowns, and which, when we talked about it, she quite rightfully called out as being unkind and punishing. She told us she’d rather earn something than lose something, and so the tickets were born: 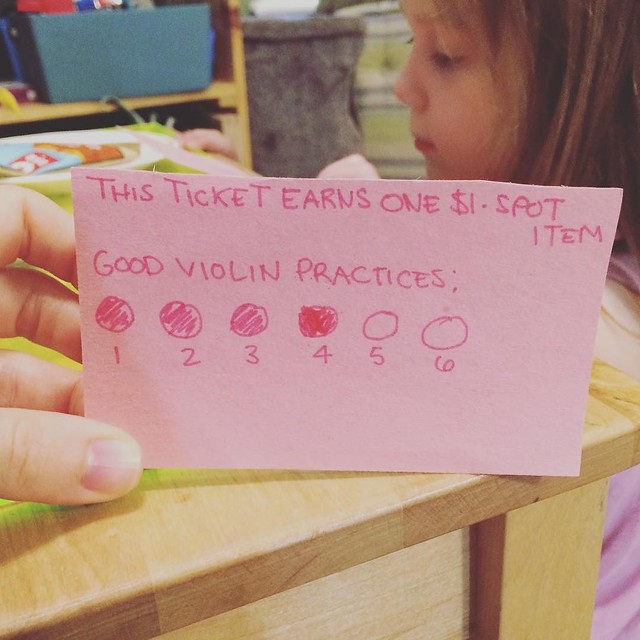 She decided her first ticket would be for a small item at Target. The next one, which will require more “dots” be filled in (her idea was to make each ticket require one more dot, which was something I was planning to push for if she hadn’t come up with it!), will be for a book she’s been wanting, and we also plan to create tickets for movie days and things like that. So far, it’s making it much easier for me to get her to shift gears into practice mode and stick with it once she’s there, and she’s even suggested practicing without my prompting (just the one time, but hey!).

We’ve also worked together to set her up for success, which has included pulling her out of group violin class (ability-wise, she’s actually ready for the “Suzuki Book 1” class, but she simply does not have the ability to stand still in one place for 50 minutes while taking turns and not interrupting – we got kicked out every single class this summer, and though I think that bothered me more than it bothered her, it has to be discouraging for her). She’ll keep going with her individual lessons, though, because her private teacher’s so very good at working with her. 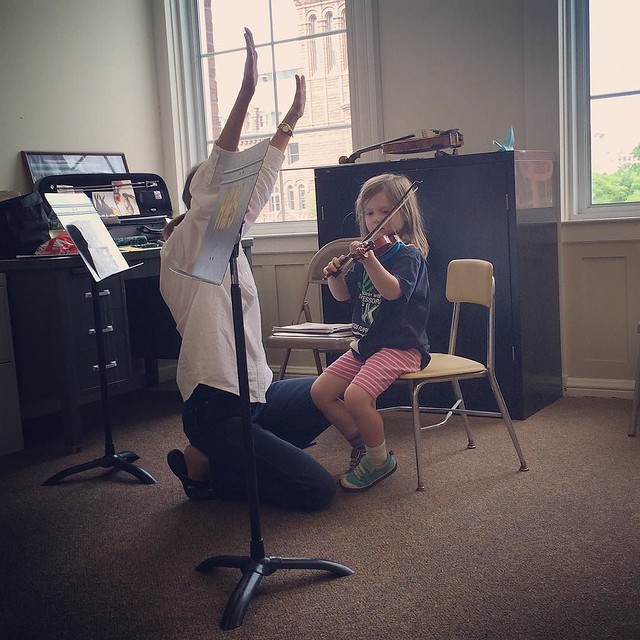 It’s been an interesting, occasionally joyful, but not always pleasant or easy ride, this summer. I also lost my grandpa a few weeks ago; this wasn’t unexpected, as he’d been slipping away with dementia for the past several years, but it was still sad. M and I flew to Missouri for the funeral, and then drove back here with my parents (who had been planning a visit anyway, but that wasn’t how we’d planned it). 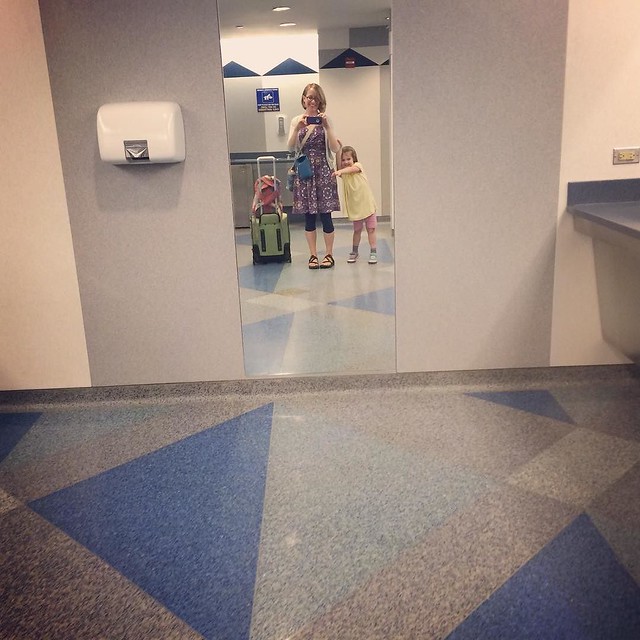 A lot of travel, but with good preparation on mama’s part, she handled things like a champ, even after she burnt her arm on a coffee pot at my grandpa’s visitation; fortunately my cousin’s wife is a pediatric nurse who knew how to treat it and we got her all patched up. 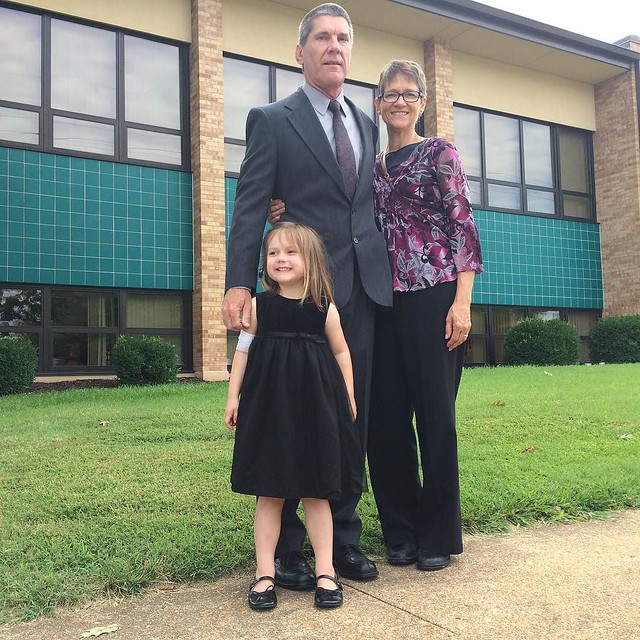 As we left the visitation that evening, M gave my grandma a kiss and said “Gute Nacht. Schlaf gut. Süße Träume. Ich liebe dich.” (“Good night. Sleep well. Sweet dreams. I love you.”) She’s used to these as our good night words, but what she didn’t know is that my grandpa grew up speaking German, and this was incredibly meaningful for my grandma. It was wonderful to see M interacting with my grandma for the first time since she was a baby, even though it was under sad circumstances.

So that’s where I’ve been since I last posted here. Not really in a knitting headspace, though there has indeed been some knitting, including at the beach! 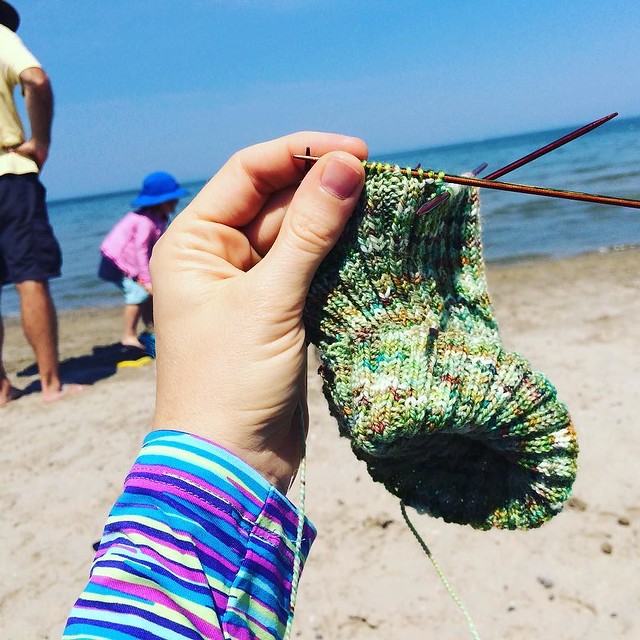 I’m working on several things (baby hats and rainbow babyStripes! sweaters) for various friends of mine who are having babies this fall, so that’s my focus for the moment! I’ve also been making progress on my Stripes! cardigan and my Imogen cowl. I’ll probably post about all of those things at some point!

But my knitting (and violin-playing) time is about to mostly-disappear, because the semester’s starting soon! Last week I took on my role as Pre-Major Advisor (and did a bit of coloring on the nifty cover of this year’s Freshman Handbook): 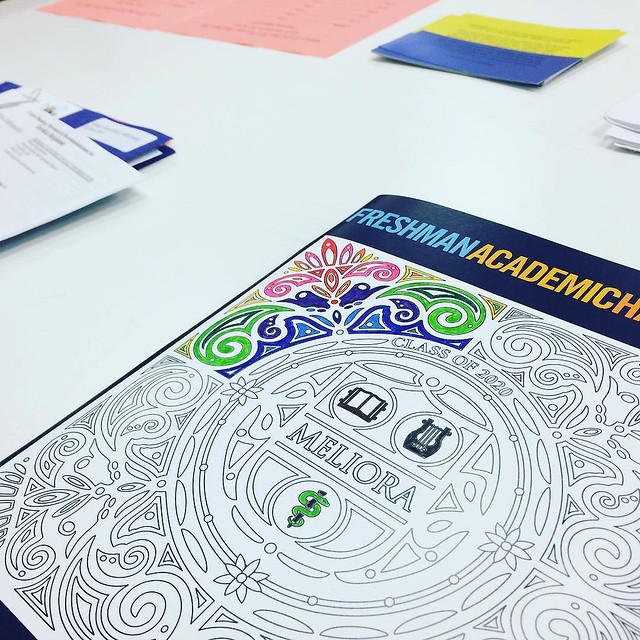 And this week, my class start. I’ve got a busy schedule ahead of me, but I’m excited to meet my students!

4 thoughts on “What we’ve been up to this summer”