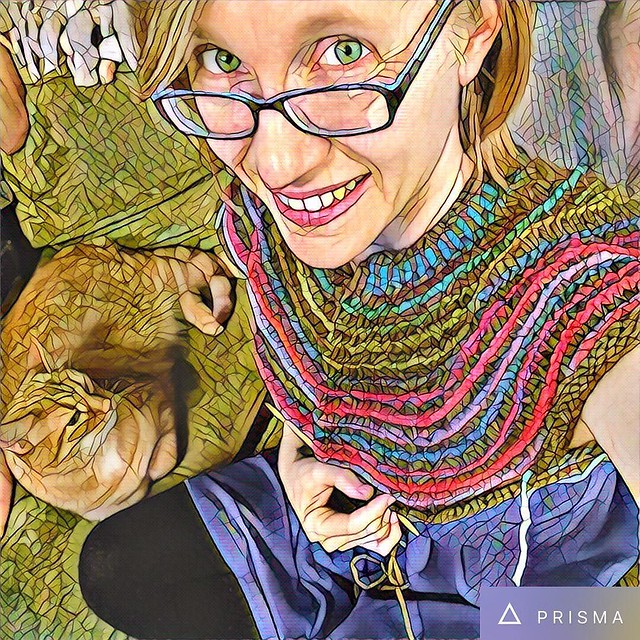 My last post was wishing goodbye to May, and now it’s halfway through July! I’ve been busy this summer – mostly in a good way, but still busier than I’d anticipated. I have been getting some knitting in, though, and this year, my focus is on me-sized sweaters. I’m trying to knit DOWN my stash, and in the process, knit UP some sweaters to fill out my collection, which sees a lot of wear in the wintertime, because I have terrible thermoregulation. I love all of the sweaters I’ve already knit, but I’m craving some variety, after wearing the same ones day after day (after day after day…our winters are LONG here!) for years on end. I hadn’t actually knit a sweater for myself since the Garter Rib cardigan (I’ve GOT to write up that pattern, and find a better name!) that I started knitting while pregnant with M…it’s been all baby/toddler sweaters since!

This summer, mama’s getting (at least) two new sweaters – a Little Wave (which I’ve already mentioned here on this blog, and which is basically finished already – it really just needs to have a few more ends woven in, and a good blocking) and the one at the top of this post…a new top-down Stripes! cardigan. I bailed on the white+rainbow version that I was knitting last summer because it was coming out with just a bit less ease than I’d wanted, and I just didn’t actually see myself wearing it. I wanted something a bit “earthier” – still colorful, but not quite so bright and garish. Thankfully, I had quite a big set of leftovers from the stash of Noro from which I’d knit the Mitered Crosses blanket, and a couple giant skeins of a nice brown Cascade Eco Wool, and so I did some math and went from there: 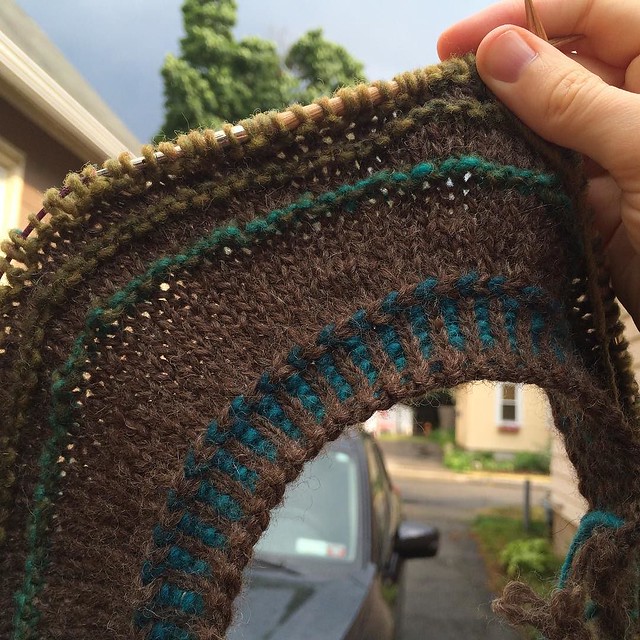 I’m just letting the Noro scraps do whatever they do, and I’m pretty tickled with how nicely it’s turning out; there are some dark earthy greens in the colorway that almost blend in with the brown, but there are also some bright pinks and teals. At this point, I’m nearly finished with the body, and I’m using the technique I perfected on the babyStripes! cardigans I’ve knit in the past 2 years, and creating pockets as I knit. Here’s what they look like in progress: 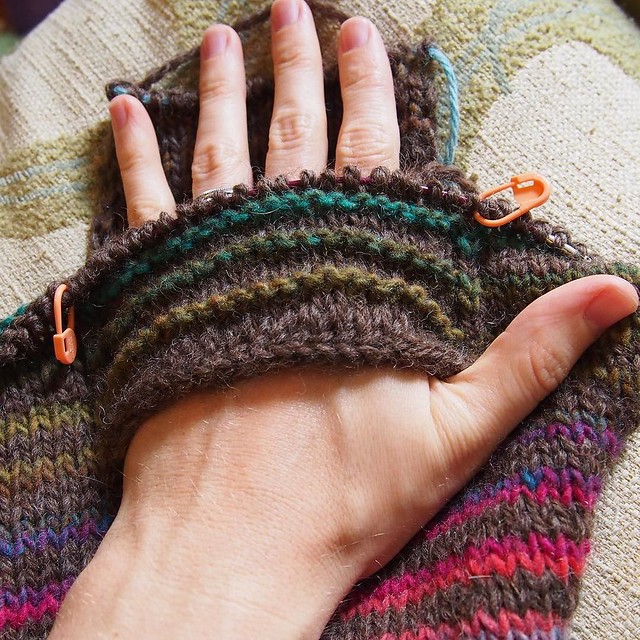 I knit a flap down from the body, with a P1, K1 edge on either side, and then cast on (with i-cord) new body stitches over the front of that flap. Then I pick up a leg from that K stitch at each edge and knit it (or purl it, on the WS) together with the body stitch as I knit each row of the body. 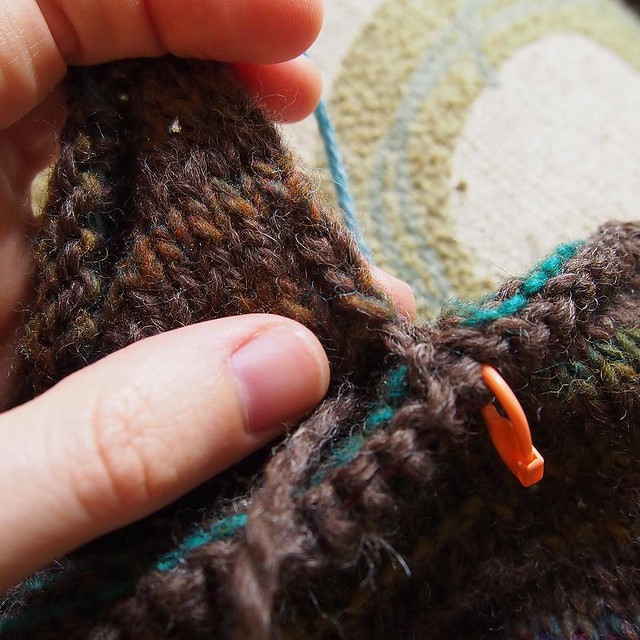 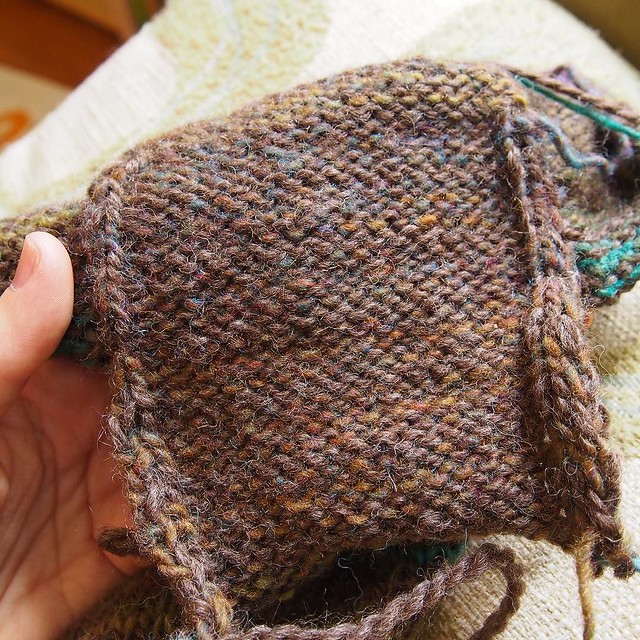 To make the pockets even more fun and contrasty, I’m doing each Noro stripe as a garter stripe just over the pocket stitches. Doesn’t it look nifty? 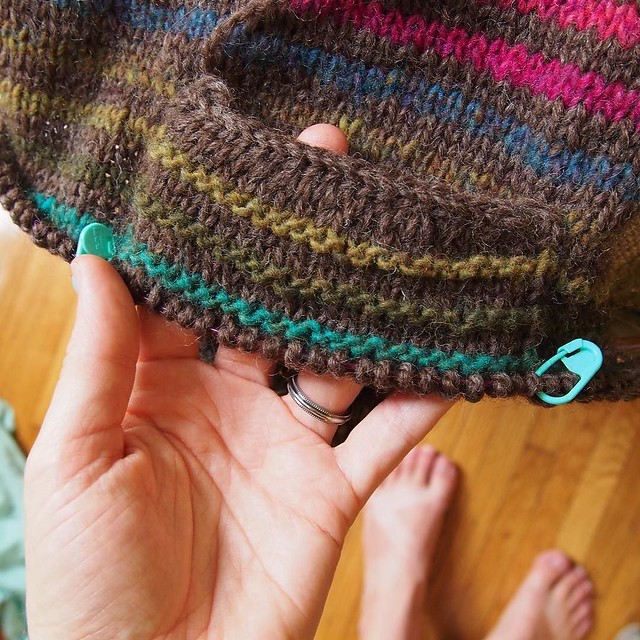 I have quite a few other sweaters that I’d like to knit soon, some of which are other people’s patterns (e.g. Reverb and Winter Traveller, both of which would use stash yarn) and some of which are my own ideas (e.g. a me-sized version of M’s striped pocket pullover, and a whole bunch of other stuff). I keep forgetting, though, that my pre-parenthood rate of sweater production is a thing of the past, so I need to remember to keep my expectations realistic, and to enjoy the process on the way to the product.

I hope everyone’s summers are going well, and that you are all holding tight despite all of the awfulness in the world right now. I wish I could hug everyone and wrap the world up in love. Consider yourselves hugged and loved, dear readers! 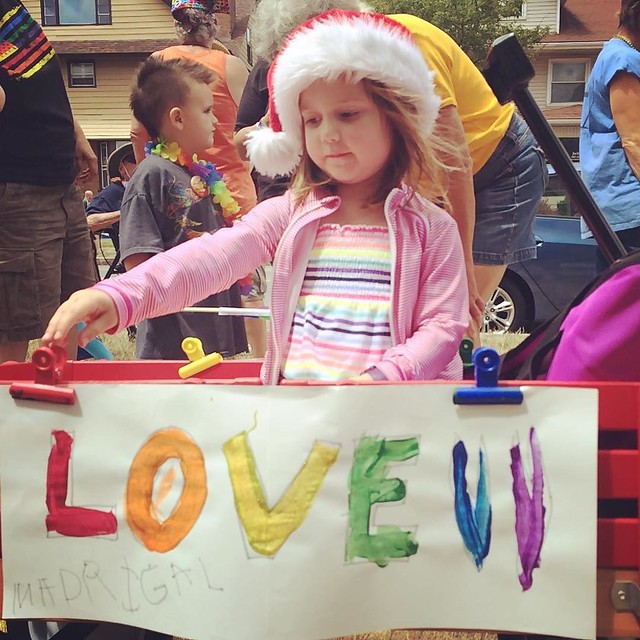