Didn’t mean to go so long without posting, but the back half of Spring semester’s been a mess of sickness and learning more about sensory processing disorder so that I can be a better mama for M, on top of the usual business of teaching and workshop-leading. But hey, do you want to see what one of those “backlit lace” swatches turned into? 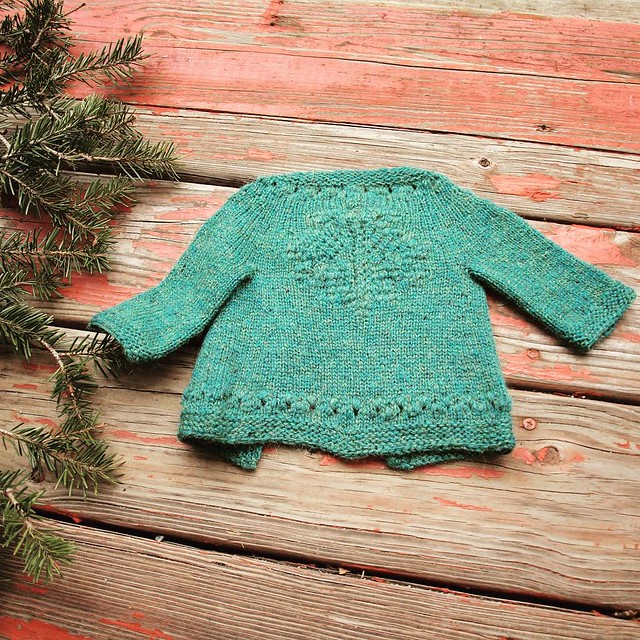 A wee-tiny maple leaf cardigan! One of my oldest friends (we met in 5th grade) became a father back in February, and I knit this tiny sweater for his little girl. Here’s what the front looks like: 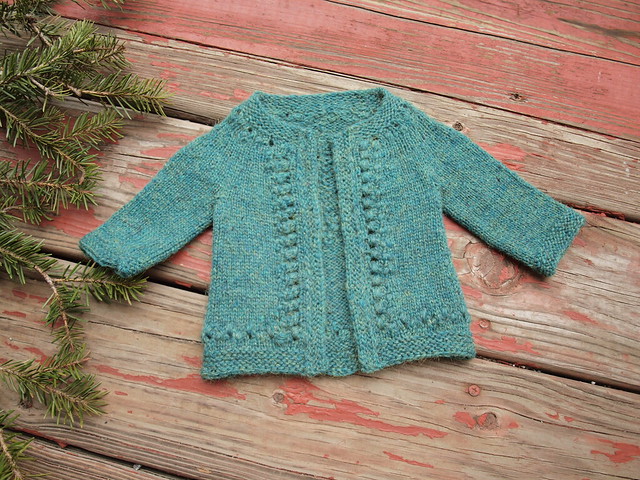 I knit it from the top down, and instead of putting maple leaves all around the yoke like I did for Vahtralehed, I knit a single one centered in the back (this works quite well top-down, since the maple-leaf is taller than the yoke depth in the wee tiny baby sizes), and put the nupp-eyelet edging around all of the edges. It turned out really, really pretty, and now M wants one in her size, and I’ve got the Beaverslide Sport/Sock yarn to do that for her. I may use some of my time this summer to write up a pattern for it; it might even be fun to work up a top-down “Vahtralehed light” cardigan in sport weight for grown-ups, too. We’ll see.

Speaking of M wanting sweaters in her size, she saw me wearing my Bohus Yoke pullover a little while back and begged me to knit her one just like it. It turns out I still had leftovers from the original (which was knit 8.5 years ago!), so I dug them out and started knitting on the very day she made her request. Kiddo doesn’t know how lucky she is! I’ve been knitting on it here and there, and got a good amount of sleeve-knitting done on the last day we had playground-worthy weather (it has been a rollercoaster of a Spring here!): 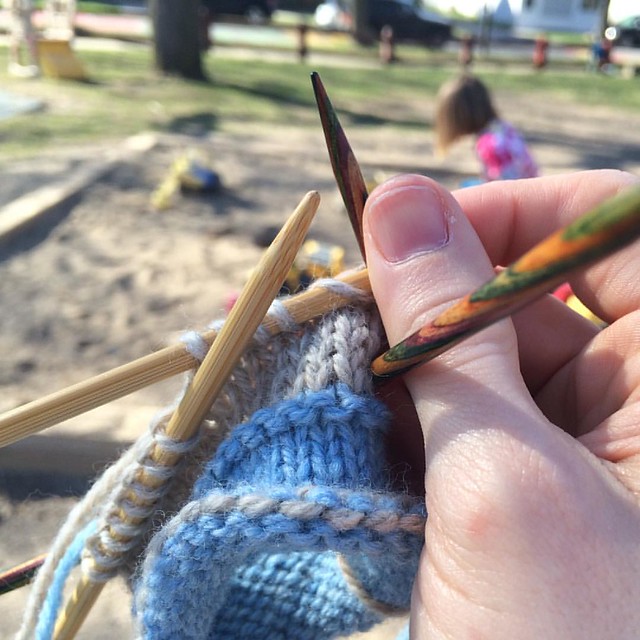 It’s so funny to knit a mini-version of a sweater you still wear fairly regularly. I’m excited to be twinsies with M soon, though of course I’m going to finish this sweater just as it finally decides to STAY warm. I’m aiming big on the sizing in hopes that it will fit her in the fall.

It occurred to me recently that though I’ve knit many sweaters for M in the past 4 years, I’ve not knit a single sweater for myself since M was born, besides the blue garter rib cardigan that I started while pregnant with her and ended up lightly felting into a jacket because I’d made it so big. And I finished that one back when M was an infant. I can’t complain about the reception the sweaters I’ve knit for M have gotten…she wears them all the time: 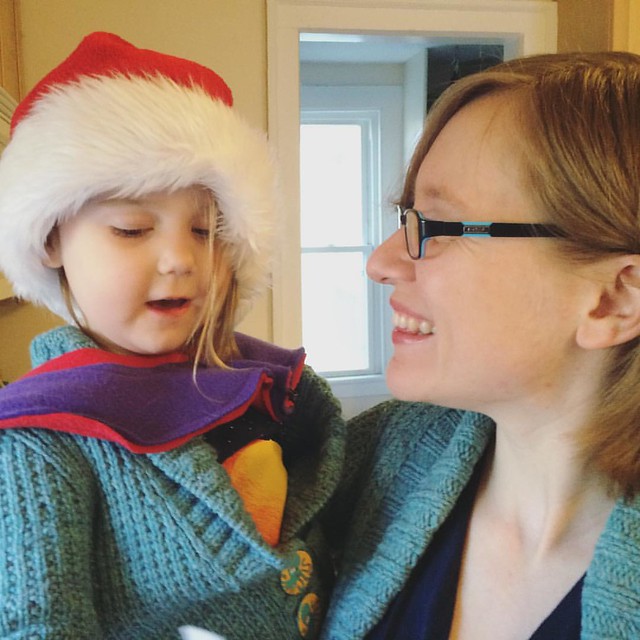 And she’s a very appreciative recipient: 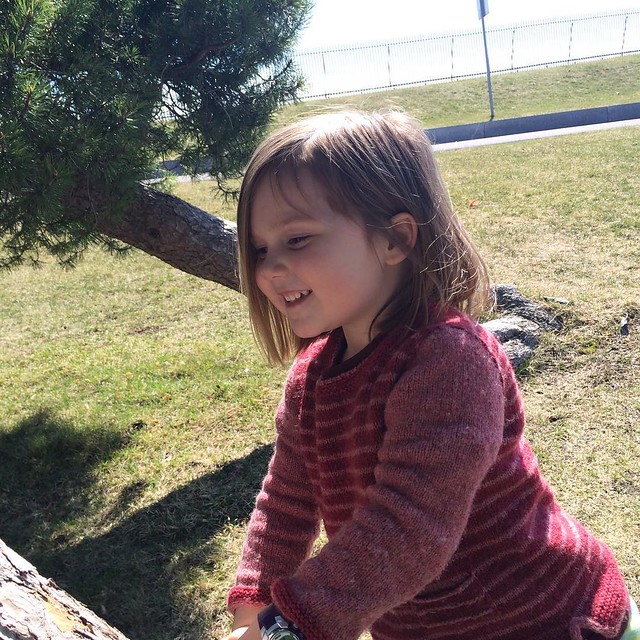 But I want more sweaters for ME! So that’s a big part of my plan for the summer. I’m very much in a “use what I have” sort of mood with knitting – I’ve got the yarn for quite a few me-sized sweaters, and I’d rather have that yarn taking up space AS sweaters than as skeins. There are plenty of projects I’d like to make that would require new yarn, but I want to focus, at least for a little while, on working up the stuff I have (or getting rid of the stuff it turns out I have no interest in working up) because my stash is kind of crazy. This does put a little bit of a cramp on my ideas regarding sweater designs (because who wants to knit a sweater whose sample was knit up in decades-old stash yarn?), but let’s be honest, I’m not really a designer. Though my head is full of plenty of design ideas, I just…don’t have the entrepreneurial sense (or the time, frankly, given my full-time academic job). Which isn’t to say I’ve given up on my plans to put patterns out for some of the things I’ve knit (the garter rib cardigan for wee ones and grown-ups, the garter-edged hat and mitten sets, the top-down Stripes! cardigans…just to name the most obvious ones, the ones that have been waiting for literally years). I haven’t. I just can’t really figure out how to make those things happen alongside everything else. Perhaps I’ll get a clearer sense of the path forward once I’ve finished grading all of these portfolios and have some time to rest now that classes are finished for the semester.