Long time, no post. The last couple of months of 2015 were filled with sickness and a whole lot of end-of-semester-crazytimes, but some good things, too. Like, for example, the fact that there are now TWO knitters in my household! 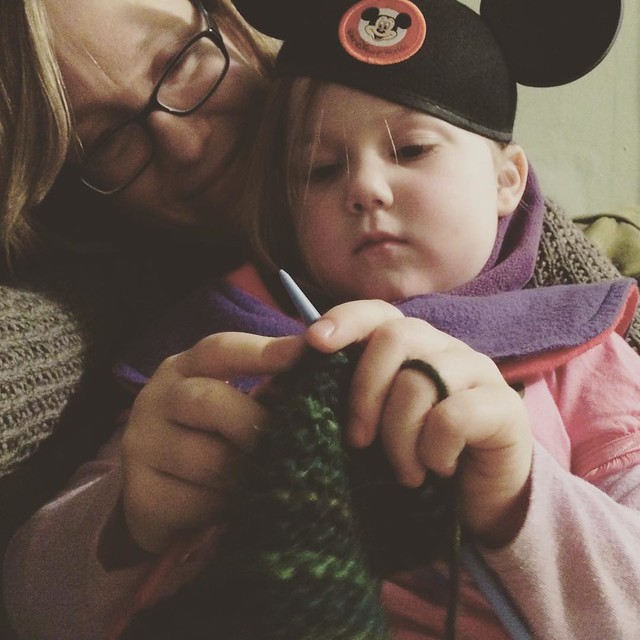 (Look how she holds her yarn like a total pro!)

M has been asking me to teach her how to knit for almost as long as she’s been able to talk, and I’d been telling her, “maybe when you’re 4” all along. Well, guess who turned 4 on Thanksgiving Day this year? I made good on my promise, and for her birthday, I gave her a set of Madtosh Unicorn Tails in her favorite colors, along with a spool knitter: 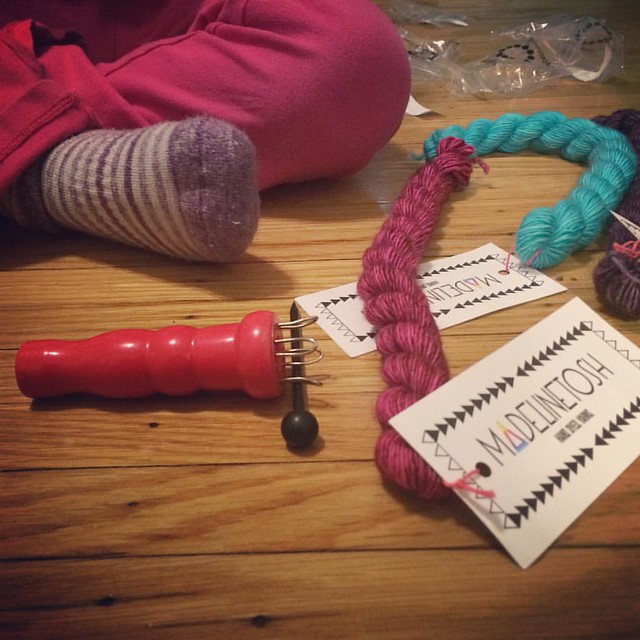 She set about learning to make i-cord pretty quickly… 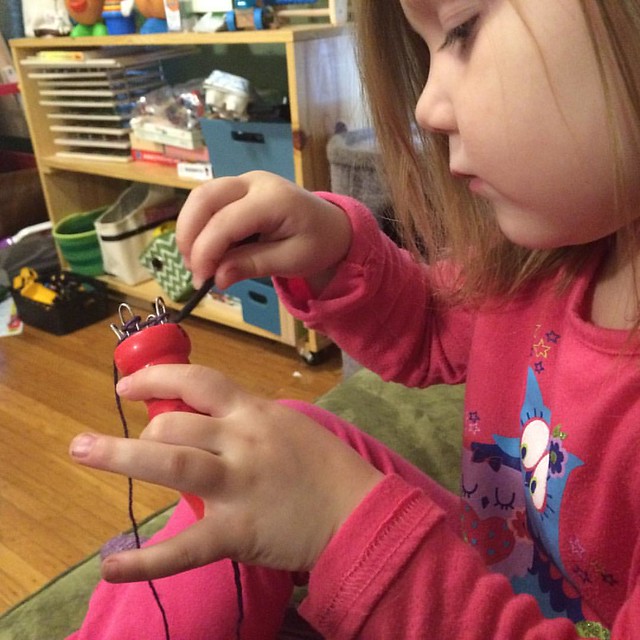 …but complained to me that it wasn’t “REAL” knitting. Kiddo wanted needles, not pegs! Grandma came through on that front, and gave her a set of size 10 needles for Solstice. I was a little skeptical that she’d be able to use them (I mean, she JUST turned 4 – that’s really early!), but she picked it up surprisingly quickly that very day: 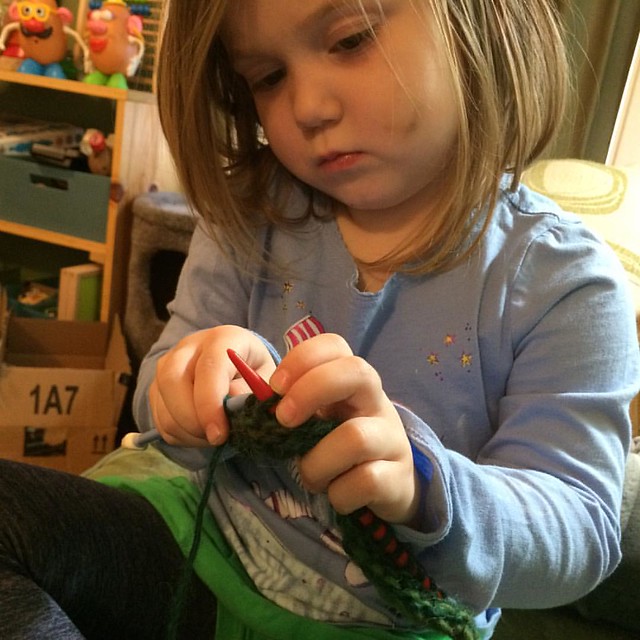 You know what the sweetest thing is, though? She decided that her first project would be a (garter stitch) scarf for Grandma! She helped me pick out some yarn from my stash (a dark green somewhat variegated Cascade Pastaza), and I cast on stitches for her, and have been helping her from time to time. The scarf is about 6″ long at this point, and probably about 80% my knitting and 20% M’s knitting, but she’s getting better at doing more and more stitches in a row before her hands get tired.

M has also helped me design a new pullover for her to wear (the yarn is Beaverslide’s 2-ply Sport/Sock weight, which I adore): 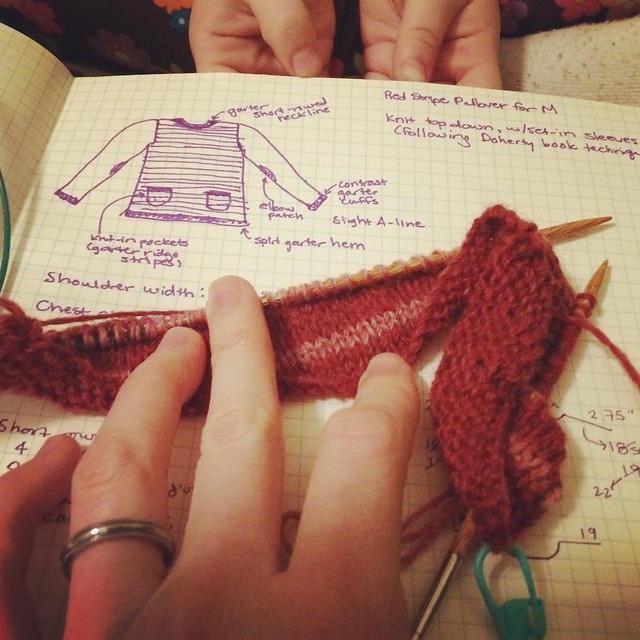 I’m using Elizabeth Doherty’s Top-Down set-in sleeve approach, and the plan we drew up involves a striped (wide dark red stripes with thin pink heather stripes), slightly A-line body, with solid (pink heather) sleeves, contrasting (dark red) elbow-patches, and of course, POCKETS. I’d been wanting to try out the techniques in the Doherty book anyway, and top-down has the wonderful benefit of try-on-ability: 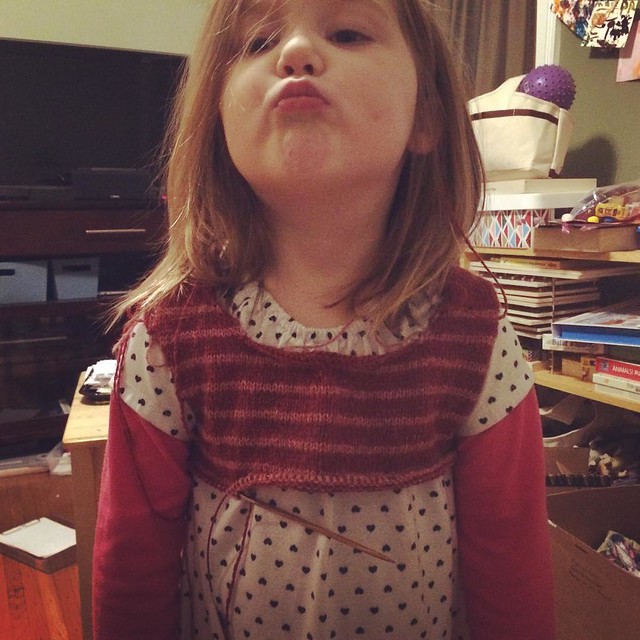 I’m actually quite a bit further along than this at this point – I’ve already knit past the pockets and am almost ready to do the bottom hem. I came up with (I mean, I doubt it’s truly original, but I made it up as I went) a neat way of adding pockets when knitting top-down sweaters, which I used on a tiny top-down version of the babyStripes! cardigan that I knit for one of the ministers at my UU church (I should write up a post about that cardigan! And maybe actually finish the pattern so that other people can knit them too!). Anyway, I used that method on M’s new sweater and gave the pockets a pink lining and they’re awesome.

I think this sweater is going to be SO great, and I kinda want to make myself one. (M also wants me to make myself one, because she loves our matching sweaters – I wonder how long that will remain true?). I’d probably end up using Cascade 220, but I’m so madly in love with the fabric created by the Beaverslide yarn that I might even be willing to knit a me-sized sweater at 6sts/inch. But I’m very seriously trying to minimize yarn purchases and knit from stash as much as possible this year (this shouldn’t actually be HARD – I have a ridiculous stash!) and am not sure I actually have appropriate amounts of TWO colors of either of those two yarns, so we’ll just have to see. Though I suppose getting a couple of skeins of contrast color yarn with a known and soon-to-be-completed project in mind is not such a big stash-crime.

My other goal for the year, since I’m on that note, is to actually get my backlog of patterns written up/finalized/published. I’ve not been able to move as quickly on them as I’d’ve wanted to these past few years because, you know, parenting and finishing a Ph.D and starting a full-time faculty job and all that, but I really want them out there. I’m just a bit torn on how to do it, because I’m noticing that I basically have quite a few parent-child matching sets in mind (including, possibly, this pullover I’m currently knitting for M and the hypothetical one for me, but also the Stripes! cardigans, the garter rib cardigans, a kid’s version of Sullivan and also a tunic based on that same nupp pattern, that garter-yoked/kangaroo pocket pullover I knit for M awhile back plus a grown-up version, perhaps a re-release of Vahtralehed as a top-down cardigan with a matching kid’s one, the Curvilinear set of hat/mitten patterns for kids and adults, and a few other things that I have in my little design notebook) and it seems like they could be a book or collection or something but I have no idea how to make that actually happen, logistically. Basically, on the designing front, I’m great at coming up with stuff and figuring out how to knit it, and absolutely horrendous on the more entrepreneurial/self-promotion/logistical stuff. Oh, and also kinda horrible at the “knitting things up in a timely manner” front, because while I’m a pretty fast knitter, this ain’t my full time gig! I’m open to any and all advice on what to do with these design ideas my brain keeps generating.