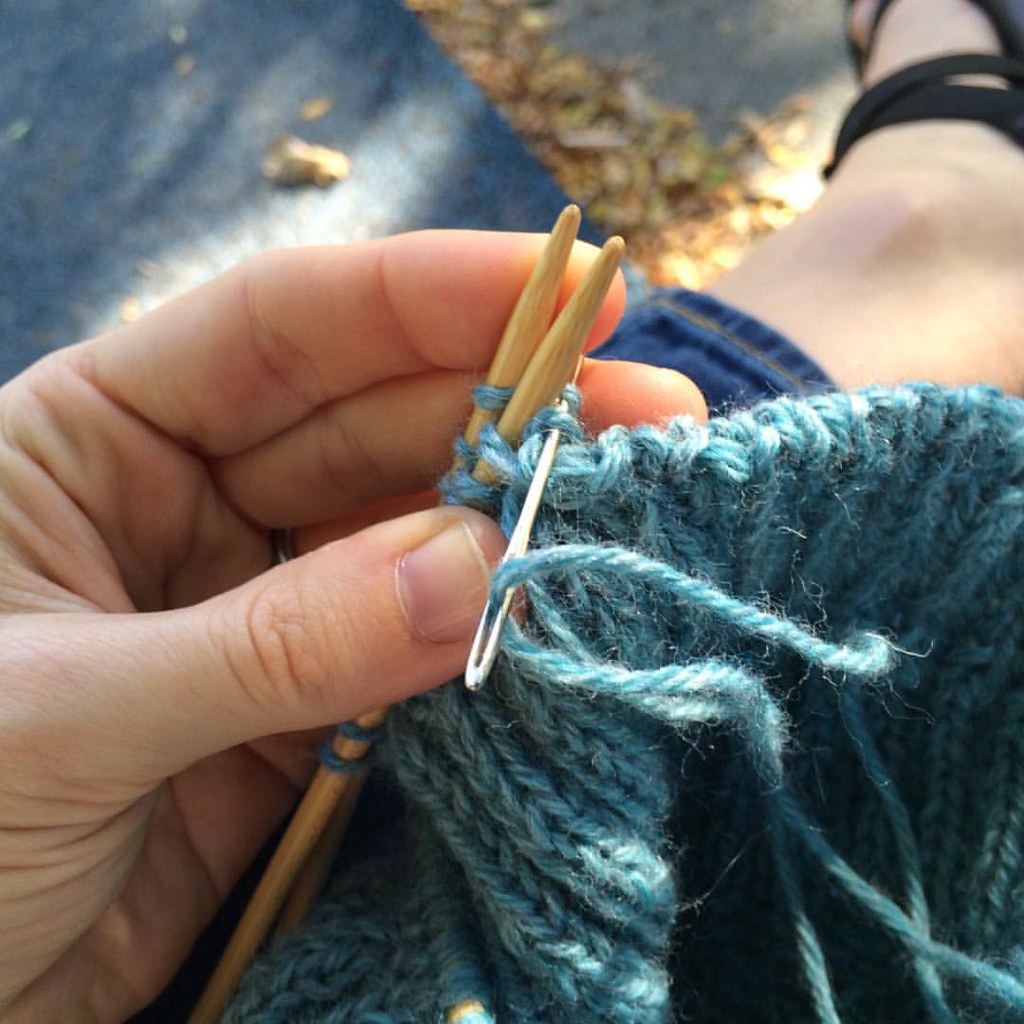 Tubular bind-off at the playground

I spent yesterday at home with M, since she didn’t have school. Well, I say “at home”, but really, we spent as much of the day outside as possible! The weather was amazing. I was feeling a bit (ok, more than a bit) overwhelmed, between the work I need to catch up on for the classes and workshops I’m teaching, and the knitting that I need to get done before Rhinebeck, and had been resenting the fact that I had to stay home with her when I was so busy. But I decided yesterday morning that I would treat this day I’d been dreading as a sort of spiritual exercise (our theme this month at First Unitarian is “Letting Go”, which is a skill I definitely need to practice!), and follow M’s whims as much as possible. We don’t actually get to have very much undirected time together during the school year – our schedules just don’t have very much “give” to them. For all the talk of how “flexible” academic jobs are, well…I suppose they are in their own way, but realistically my job during the semester is probably more than full time (given all of the time I need to spend outside of class time giving feedback and prepping and whatnot), and the times when I have to be IN the classroom (either my own, or a class where I’m running a workshop) or in meetings are anything BUT flexible! So spontaneity isn’t a big part of my life right now.

We started the morning with “letter work” – M has very suddenly become obsessed with learning to write, and has been asking me to help her spell specific words. The lists of words she wants to spell are so charming and fascinating to me – yesterday, it was “DUCK”, “MONSTER”, “GOOD”, “BEAUTIFUL”, “PERFECT”, “GREAT”, and “TREE”. 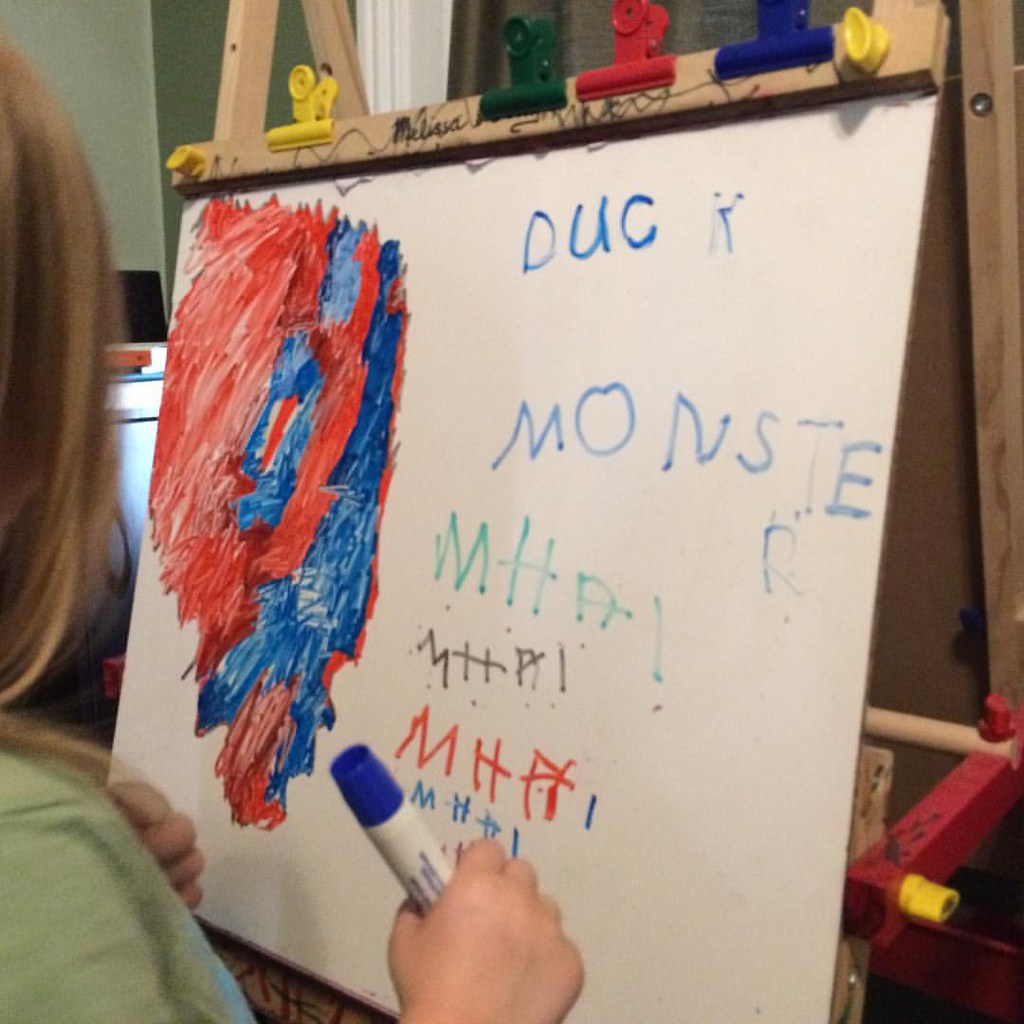 She is so, so excited about being able to write things that I can read. Even if they’re kind of random letter strings…she gets a kick out of me pronouncing them to her! She used to just write zigzags on things when she wanted to “write”, but yesterday she said to me very excitedly, “mama, now I don’t have to write zigzags on everything, I can write LETTERS!” Yes, kiddo, yes you can! And because I’m a huge nerd/linguist/writing teacher, we had a little talk about how shared knowledge is necessary for communication, and that’s why she can’t just use “her U” (her first attempt looked more like a Q, oddly) to write “DUCK”, because it’s not the “U” that we all share and recognize as “U”. And now I think I need to dig out my Alice in Wonderland book and read to her about Humpty Dumpty and his words that mean whatever he wants them to mean :)

Then we watched a Reading Rainbow episode together, and in it, they mentioned having a picnic, which led M to request (for probably the 100th time) a “picnic at the beach”. We’ve never actually been able to make it happen, due to the aforementioned busy schedules, but I had the glorious realization yesterday that…hey, we actually COULD! It was delightful (but also a bit disorienting – I am not generally a person who handles unplanned activities with grace) to be able to say “YES” to something like that! We took our little PlanetBoxes up to the beach and had our lunches with the lovely view of Lake Ontario in the background. 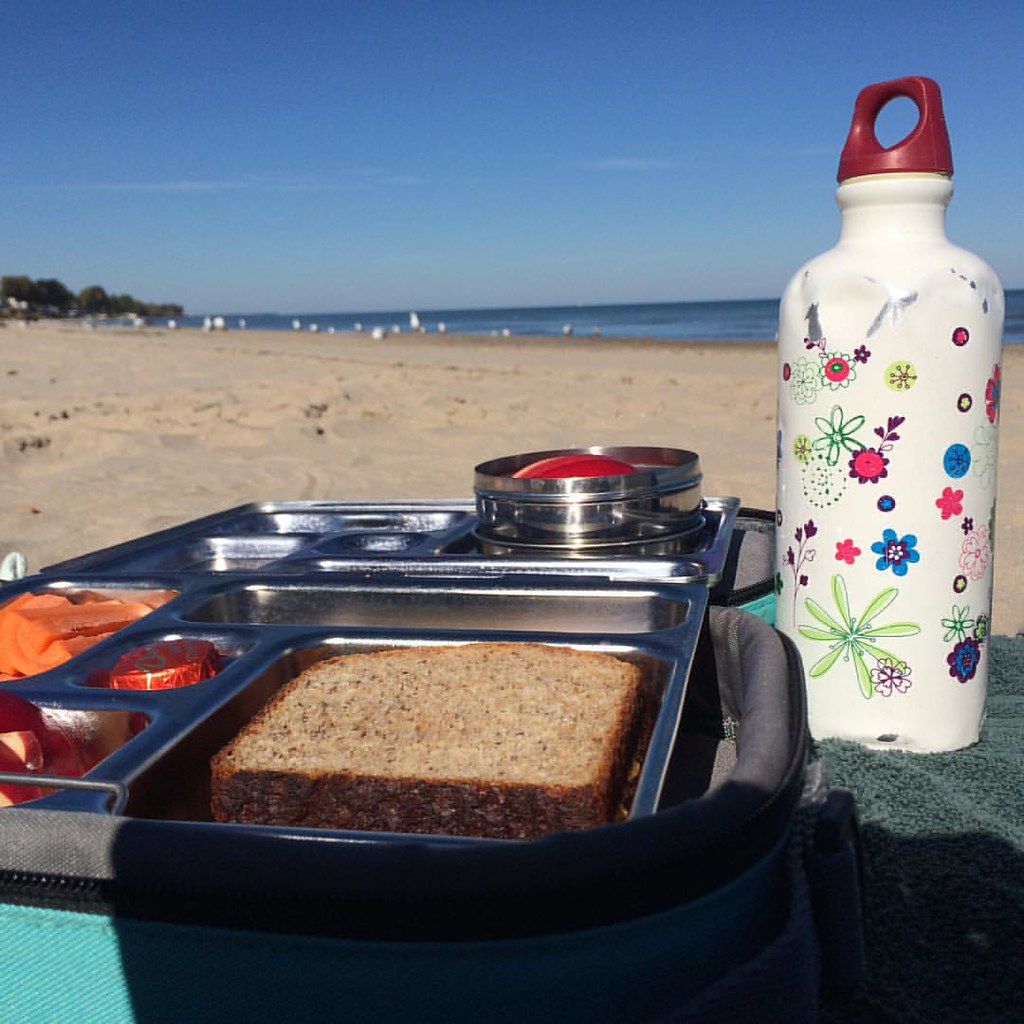 I love how easy the PlanetBoxes made this – we just opened them up on top of our beach towels and had everything we needed. Seriously, I know I probably sound like an informercial here and I know PlanetBoxes are a bit pricey but they are absolutely the BEST reusable lunchboxes I’ve ever found, and I’m so glad that M and I both have them now. 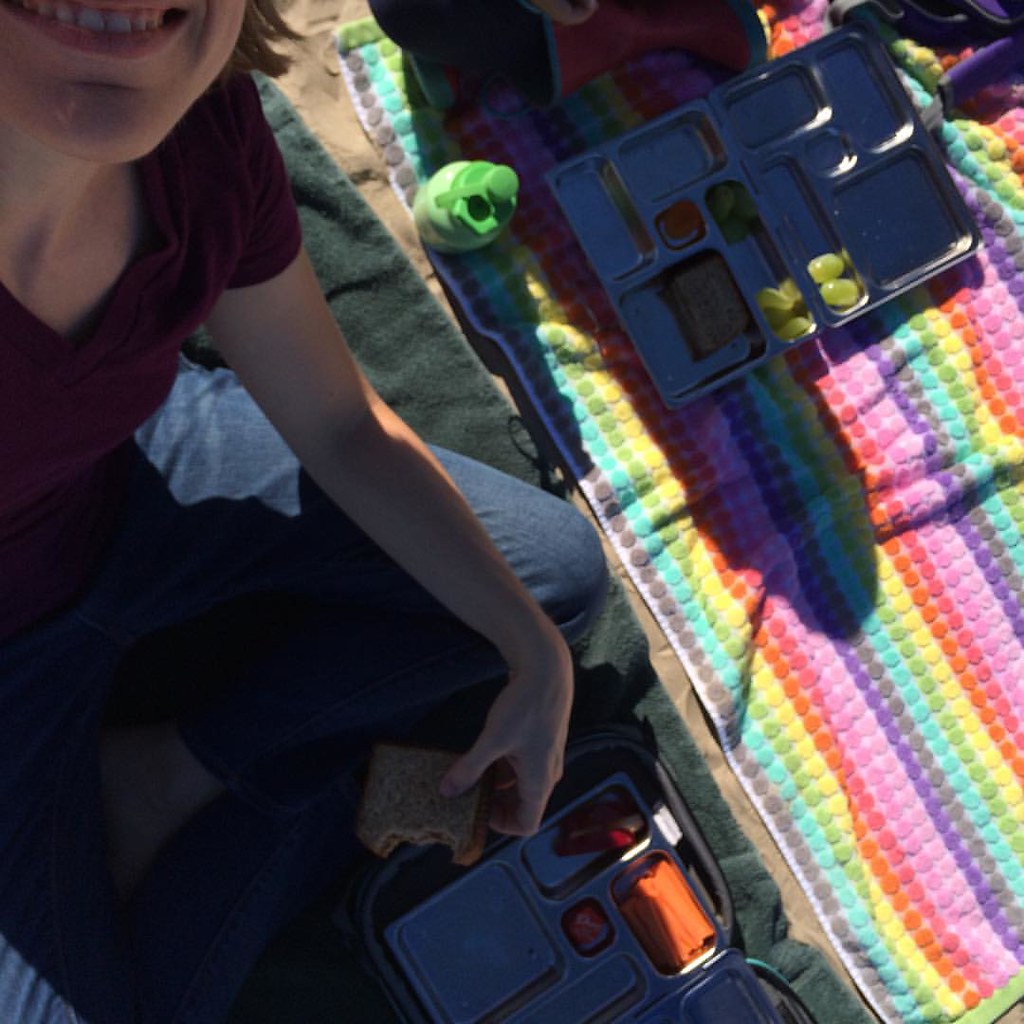 It was a wonderful day for soaking in the sunlight – we probably won’t have another day this warm and sunny for 6 months! 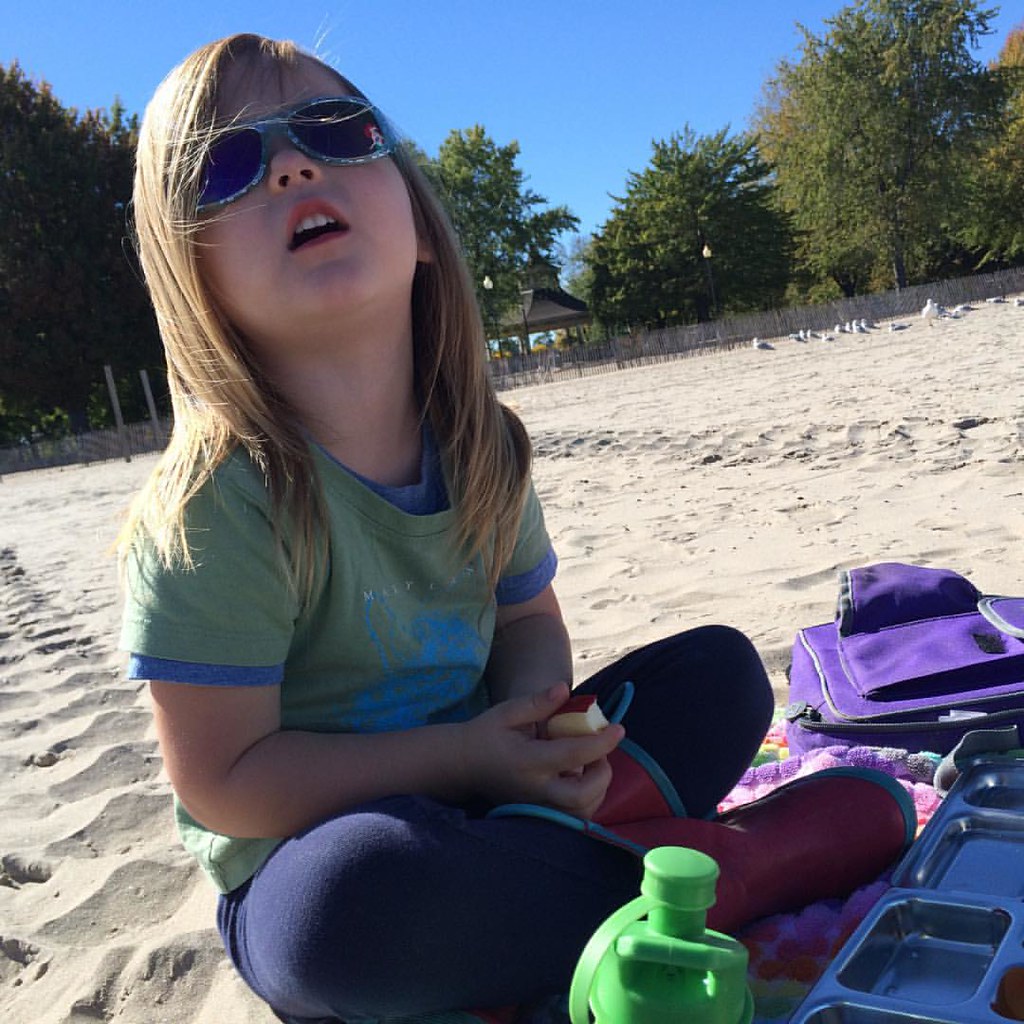 I’m not gonna lie – I’m so unused to spontaneity that I had this nagging sense of “I’m not supposed to be here, this isn’t what I’m supposed to be doing” the whole time we were at the beach. Like I was going to get “caught” going off-plan, or something! As I said, I’m definitely a person who needs some practice at letting go of plans and schedules.

After the beach, we headed to the playground, where (after pushing her in the swings for probably 40 minutes straight!) I took advantage of M’s brief period of willingness to play without me to work on the tubular bind-off for her garter-rib cardigan (pictured at the top of this post). She checked in with me a few times, always with a beaming smile. 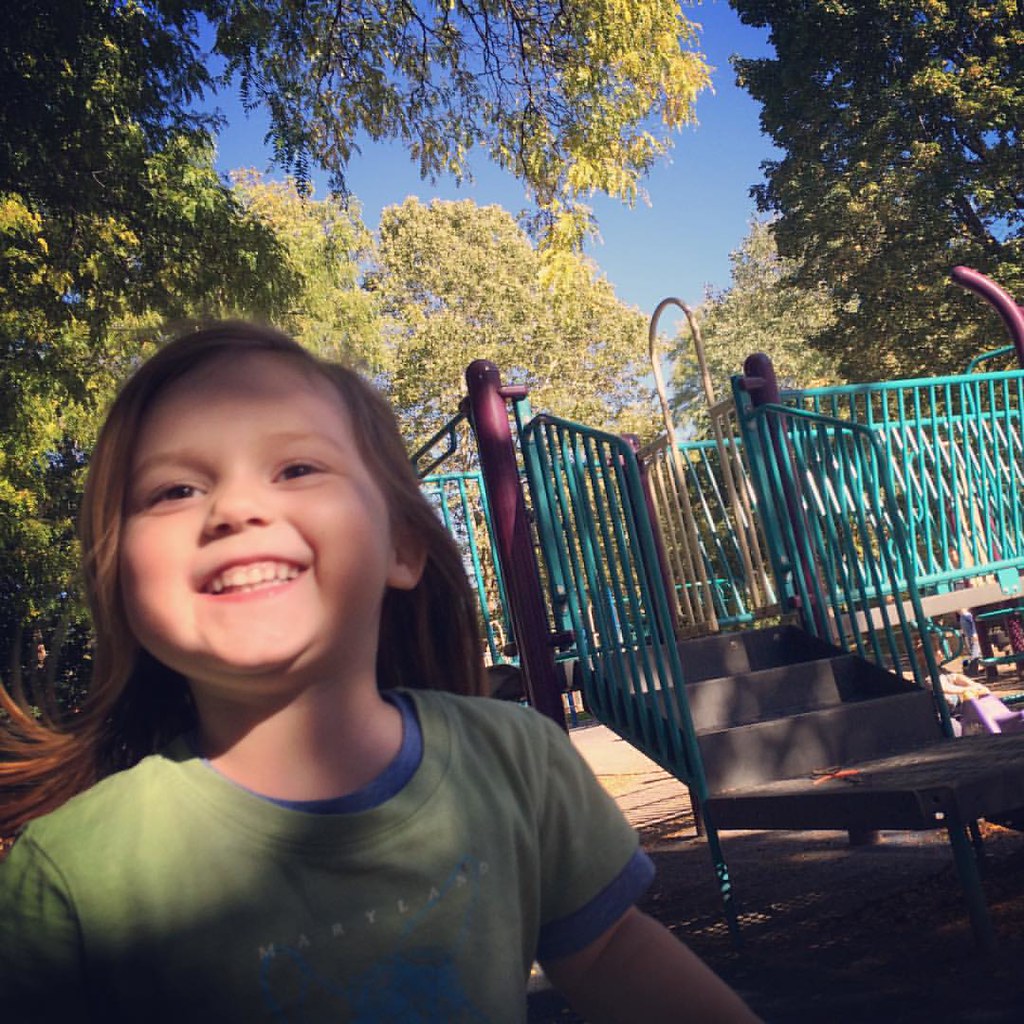 I’d started the shawl collar on Sunday, and holy moly shawl collars have a lot of stitches! And the kitchener-based bind-off isn’t the easiest one to do “on the move”, but I did make some good progress at the playground. And I got to finish the bind-off (and knit 2 pockets!) at Knitting Guild in the evening, so now I’ve just got to kitchener the underarms, sew on the pockets, and weave in the ends before I block it. I want to block it on Wednesday night so that I’m sure it’ll be dry for us to pack up and bring down to Rhinebeck – I’m sure I can sew on buttons in the car if I need to.

We followed up our playground time with baking – she helped me make the dough for the loaves of bread we’re baking for the teachers’ lunch at her school (it’s her classroom’s turn to provide the meal), and then helped me make apple cake with some of the apples, but I managed to leave out ALL of the sugar, which made the dough very stiff and nearly unworkable. I’m told it actually tastes ok (I didn’t get a chance to eat any before Guild), but we both had a good laugh about mama leaving the sugar out of cake! I really do enjoy baking with M, when we’re not under time pressure. I’m not sure how to put more “give” into our lives (and I’m definitely not going to ask for more days where M doesn’t have school during my teaching semesters!), but I do think that yesterday showed me how much fun M and I can have together when we’re not beholden to a particular plan or schedule. A worthy exercise. (And now I must return to workworkwork.)

5 thoughts on “inviting spontaneity on a pesky day off school”