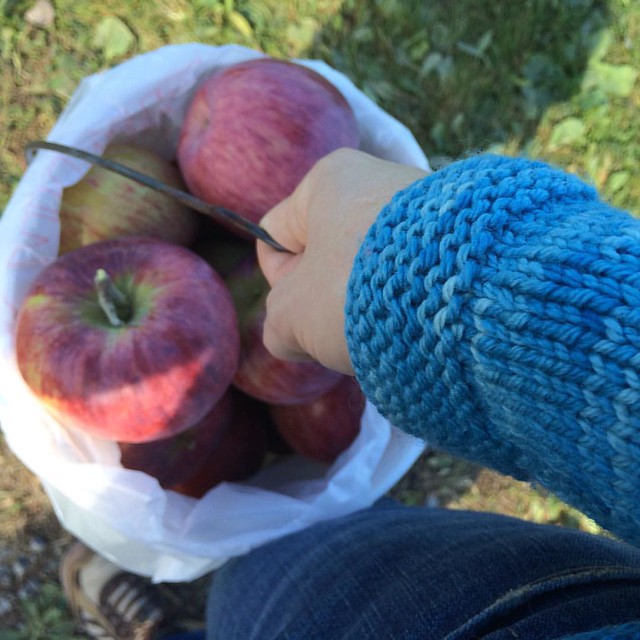 This weekend, you guys. The weather. It’s been glorious, in the way that only mid-October weather can be. And what better thing to do on a glorious October weekend than go apple picking? 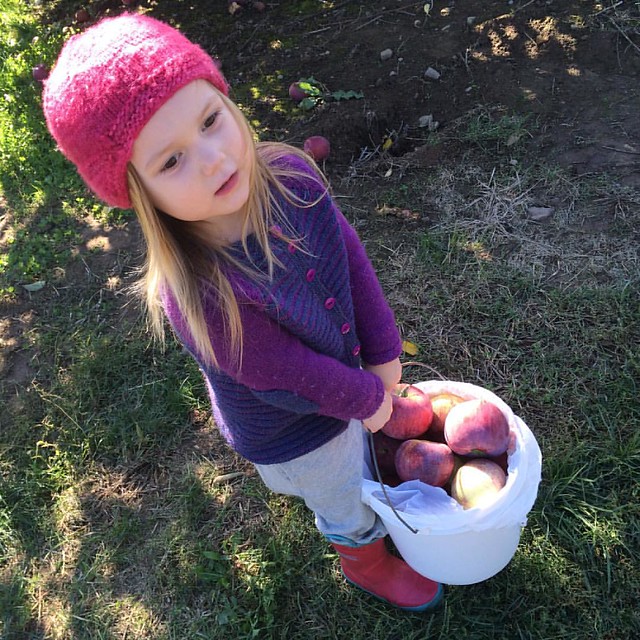 M showed off her strength, and the same sweater and hat ensemble she wore at Rhinebeck last year, carrying around a full bucket of apples she helped pick. 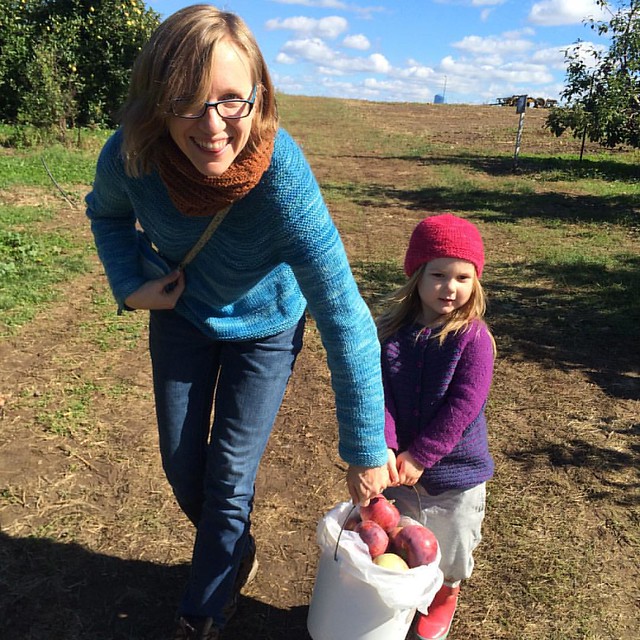 We made a good team once the bucket got TOO heavy. Gosh, I can’t get over how long M’s hair has gotten! She’s looking so grown-up now. 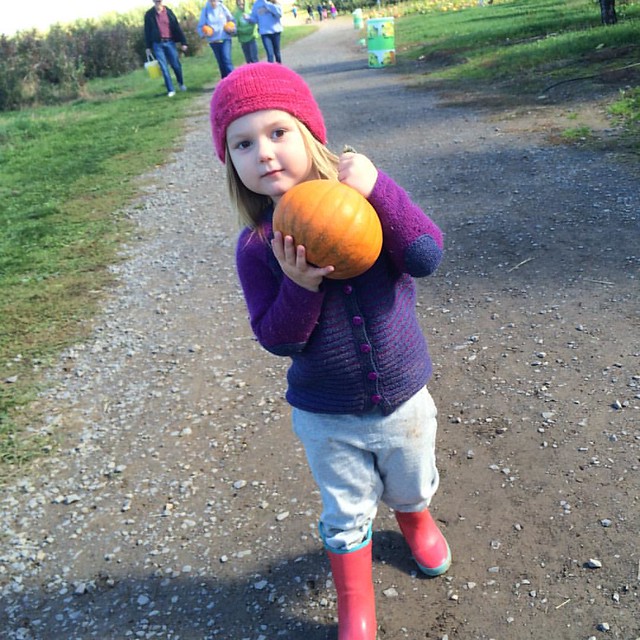 She was very excited to find pumpkins that were small enough for her to carry! 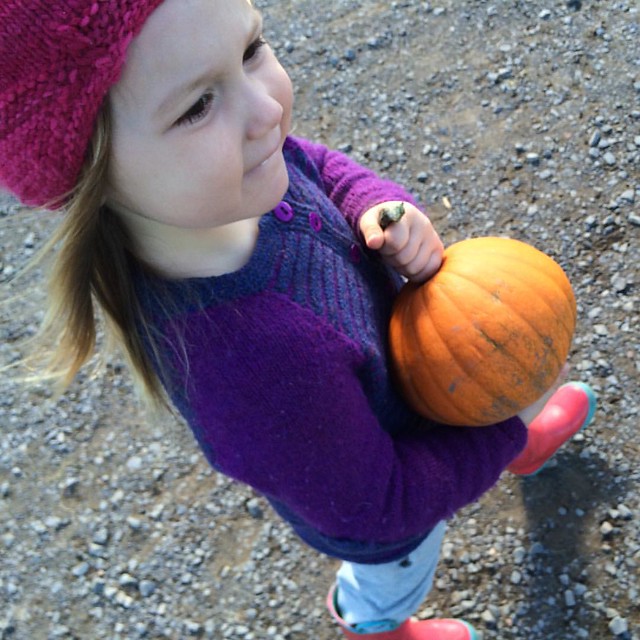 The one she found even had a stem that was shaped like a little handle. We ended up getting two… 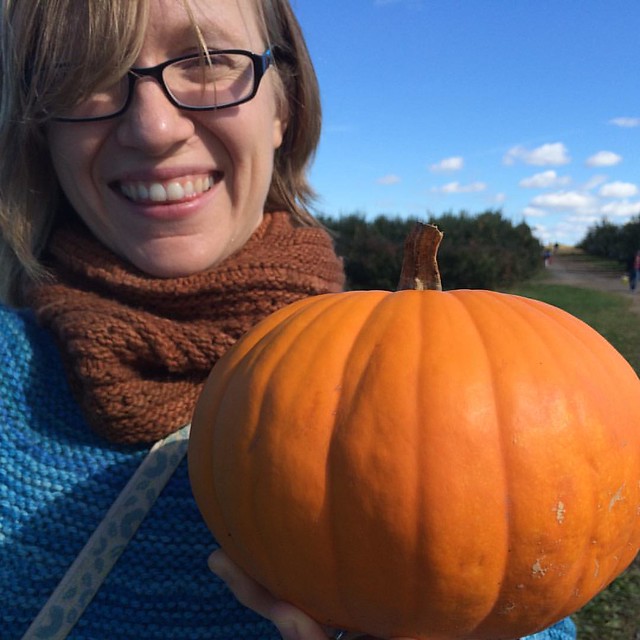 …and M is very excited to decorate them for Halloween. On that note, I’d best get cracking on her costume – she wants to be an octopus, and I’ve been playing around with ideas of how to make her a sort of hooded “poncho” with tentacles like she wants. Given that my sewing machine is currently on the fritz, I think I’ll be hand-stitching, which I’m actually more comfortable with compared to machine-sewing, but it’s SLOW, and October’s almost half over!

But before that, there’s Rhinebeck – and oh boy, do I have my work cut out for me on that front. I’ve given up hope of finishing my Stripes! cardigan (I figure I’ve knit 3 shawls this year, so if I don’t have a new sweater to show off, so be it!), but am aiming to finish M’s (bigger) garter rib cardigan, and to (finally) sew up the squares for the Mitered Crosses blanket. I’ve been knitting away on the shawl collar/buttonband this weekend, and blocking pairs of squares, too. M’s been helping me with the latter, and it’s so adorable – she’s now talking about taking her baby to “pretend sheep and wool festival” and “teaching” her baby how to “pin out” squares of construction paper…I’m definitely raising a knitter, here! I had photos I wanted to share of the sweater-in-progress and blocked squares, but I took them with my real camera instead of my phone, and they are now trapped in the disaster that is Photos on Mac and I maybe had a bit of a meltdown trying to get them out so that I could post them, somehow, but it turns out no amount of tears or swearing at the computer would actually fix it. Who knew? I’m planning to take real-camera photos at Rhinebeck, so I sure hope I can figure out how to get them to Flickr without going through Photos. (The new “improved” Flickr Uploader has also led to a fair amout of tears and swearing…goodness, all these “improvements” lately have just made photography and blogging, things that should be fun and not that time-consuming, into Sisyphean tasks. I feel like half the computers in my life have become nearly-useless this semester and it’s maddening!)