Somebody is pretty happy with her new pair of socks! 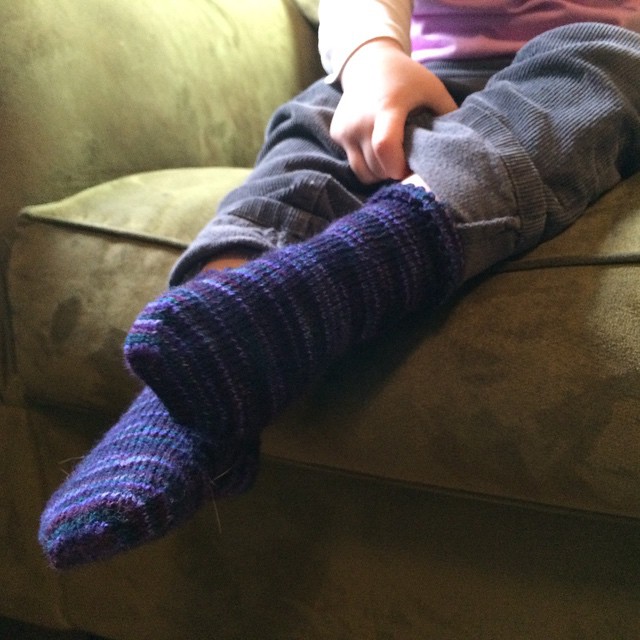 I finished them this weekend, and she’s already worn them around the house and gotten them completely embedded with cat hair. (This says more about our poor housekeeping skills than anything else, really – goodness, our floors are gross!) To her chagrin, they lack the “grippies” that are on the bottom of her Day of the Week socks from Old Navy, so she’s already wiped out on our wood floors a couple of times. I don’t really want to paint the bottoms of these handknit socks with puff paint, so I think she’s just going to have to live with slightly slippery socks (or, she could actually take my advice and wear her slippers over them – but what 3.5 year old actually wants to listen to her mama’s advice?). 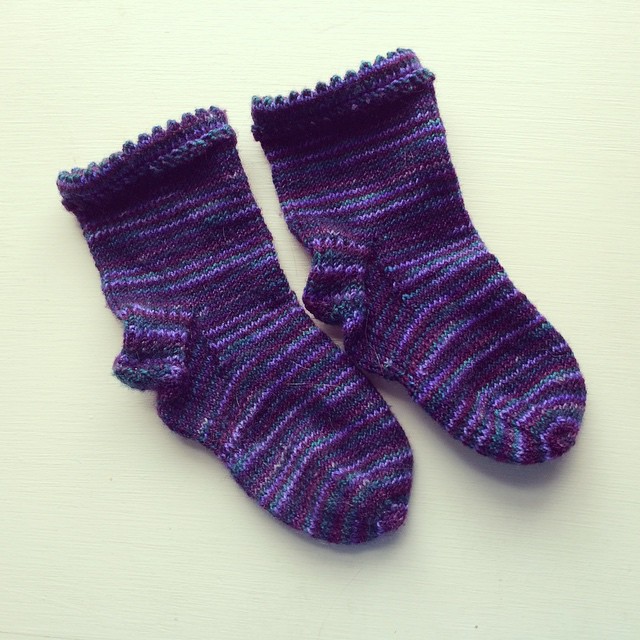 I’m pretty pleased that I was able to remember enough to knit a passable pair of socks despite not having knit any in AGES! And these were perfect for using up the leftover yarn from my own socks. M likes the picot/eyelet detail at the top of the cuff, which I used to mirror the detail on my own socks. And I really like the way the slipped-stitch “arch support” section worked out!

For anyone who’s curious about the details, here they are:

Shoe Size: M is currently wearing size 10 (wide) shoes, and her foot is ~6.5″ in circumference.

Then I did a heel flap (about which see below – I wouldn’t do it this way again!):
RS: Knit to center stitch, k1, ssk, k1, turn.
WS: Purl to the stitch before the “gap”, p2tog, p1, turn
(Continue in this fashion until all the stitches are used up, then pick up stitches around and rejoin for gusset – I did the standard every-other-round gusset decreases until I was back to 50sts – I meant to go to 52 but I goofed up on the first sock so replicated it on the second)

Then I did the slipped-stitch “arch support” over the central 12 sts of the sole, for 14 rounds:
Round 1: starting 6 sts before the end-of-round marker in the center of the sole, *s1, k1* 6 times
Round 2: knit all stitches

Then I knit plain until the toe, where I did the standard toe decreases:
Round 1: knit 9, k2tog, k2, ssk, then knit until 15 sts remain, k2tog, k2, ssk, knit remaining 9 sts.
Round 2: knit all stitches
(Continue decreasing on either side of those central 2 sts until 22 total sts remain, then distribute them as evenly as possible over 2 needles and kitchener the toe – now you have a finished sock!) 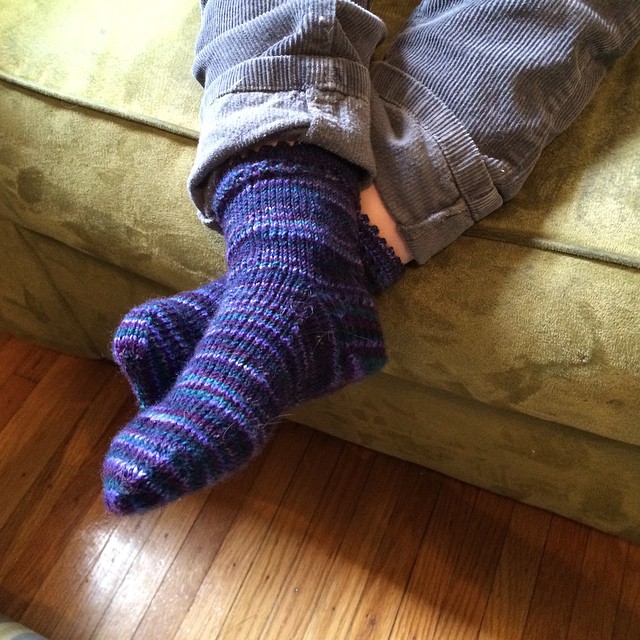 The one part I’m not totally happy with is the heel flap – I don’t think I quite remembered how to do the turn right (it ended up weirdly pointy), and they don’t actually stay in place on her foot very well, either. I think the heel flap might be ever-so-slightly too long, but I’m also curious if a different style of heel would fit her better. On her next pair of socks (oh, yeah, there’s a next pair – I already cast on for them last night!) I’m going to try a garter-stitch short-rowed heel, just to see if that works better.

After I finished M’s socks yesterday, we went to an organ recital at my church. We brought M with us, because she loves music, and we thought she’d enjoy hearing an organ. She was…well, not really THAT well behaved, but pretty decent for a 3 year old at classical music concert! She did love the organ, and the viola (they played a Bach piece that was originally for harpsichord and viola da gamba, but worked beautifully with organ and harp), but got too wiggly and had to hang out with A in the lobby during the part with the Mezzo Soprano singer (who had a lovely voice). We were by far the youngest folks at the concert, but we got absolutely no judgement, and in fact got lots of props (and compliments on our “bravery”) from everyone there for bringing a little one to an organ concert. I figure that I want to cultivate her interest in music, and going to low-key concerts like that is the only way she’ll learn how to behave at a more formal concert. So, we’ll call the concert a success!

5 thoughts on “things i make for maddy: socks!”