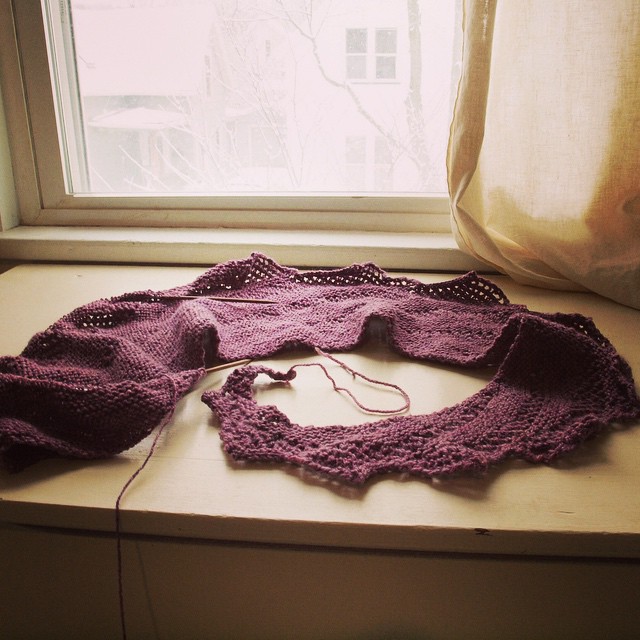 I’m finally a little bit recuperated from the events detailed in my last post. Not all the way, though – I can’t lie, that drive (a whole week ago now) really messed me up, to the point where I don’t think I can go to Knitting Guild tonight because it’s snowing today (not even hard, but still), and that would involve driving in the dark in the snow and…nope. I don’t wanna. Not yet. Anyway, my Spring Semester courses start on Thursday this week, so I’m spending the early part of this week getting ready. Preparing Blackboard and Google Drive, updating my protocol for the pedagogical research I’m doing, that sort of stuff. This transition into Spring Semester is always a little rough for me – there’s the seasonal loss of light, of course, which I don’t handle very well, and I also just don’t think that Winter Break is enough time for me to recharge, especially if it involves the kind of travel that it has these last several years. I was talking to a writing program buddy about this, and she said that when her kids were little, they just didn’t travel, and made folks come to them. Alas, we’ve been the ones going to everyone these past few years, because for both A and I, our parents and our sibling live very near each other (in his case, in OH, and in mine, in MN/WI), so it “makes sense” for us to be the ones who travel. And, well, our siblings have little ones, too, so SOMEONE with little ones is going to be traveling. And it’s always us. C’est la vie. But not next year. 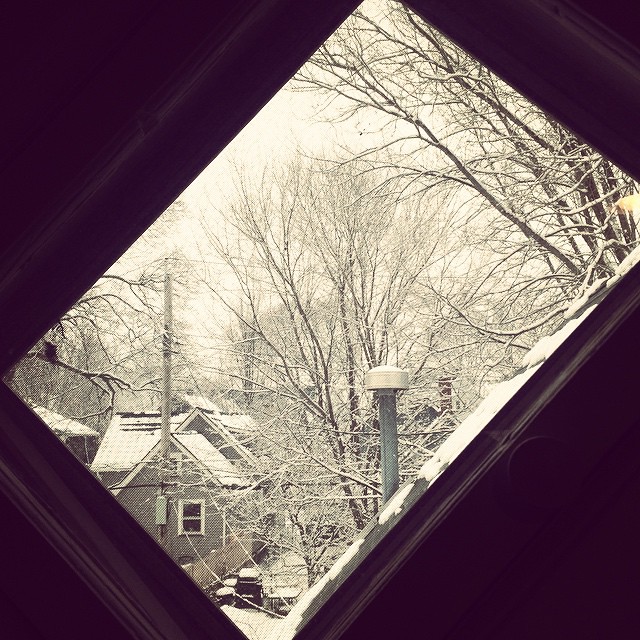 The New Year is always a little weird for me, because my brain is so strongly tied to the academic calendar that I get confused when everyone’s setting goals and making plans and such – that’s something I tend to do in late August, not in January! A lot of the folks I know have been setting “intentions” this year, and choosing a particular word to encapsulate them. To absolutely no one’s surprise, I like words. If I had to choose a word that reflects the intention with which I started this academic year (because seriously, that’s my “new” year!), it’d be “LIVE”. Which sounds totally lame – haven’t I been living all along? But this is the first year when I’ve felt like my life really belonged to me. I know, I know, that sounds idiotic. But like a lot of folks who go straight from high school to college to graduate school, I ended up in this weird place where my life was defined by the hoops I needed to jump through – my life WAS the hoops. But there are no hoops anymore. I am free from hoop-jumping forever and ever. There could’ve been more hoops, if I’d gone for a tenure-track job, but fortunately for me, around the time when I was deciding to have a baby, I started to truly see the academic hoop-jumping for what it was for me, and decided I didn’t want to be on that treadmill anymore. It took awhile, as these things do, but this year, with my Ph.D and my new (non-TT) teaching job, I feel like my life truly belongs to me. So I am going to LIVE it. I’m still sorting out for myself exactly what that means, but life definitely feels different to me this year (where by year, I mean since August. Sorry. Academia warps you!)

I’ve been trying to take a very relaxed approach to goal-setting these days. By which I mean I don’t really make a big deal out of setting them, and never set them firmly in stone. I know that goals can be a tremendous motivator for a lot of people, but they actually tend to de-motivate me in a weird way – I start doing something just because it’s the goal, and the intrinsic joy and interest and motivation get sucked out of it. (It’s that hoop-jumping business again, you know?). And it becomes something to bludgeon myself with, if I fall short, so the whole process of goal-setting and goal-reaching becomes incredibly fraught and stressful. And well, I’m working on being kinder to myself (thanks, DBT!), but let’s face it, I definitely don’t need to add pressure to achieve particular goals to the picture, given my own tendency to use any perceived failure to achieve them as fodder for the self-loathing mill. I’m also finding it much easier to just live, and experience the joy in life, if I go in with fewer expectations (for me, goals are one form of expectation), and more acceptance. There’s tremendous freedom there, and I think that I’ll thrive on it. It doesn’t mean I’m going to be utterly inert – I mean, I’m the sort of person who can’t really sit still and whose mind is always churning with ideas, so I’m not worried about taking my foot off the gas pedal of goal-setting a bit. It’ll be interesting to figure out ways to give myself the structure I definitely need without the pressure that I definitely don’t need. Expect more musings on that front this year!

There are a few new things in store for 2015 (despite everything I said about it not being my “new year”). One is that I’m not going to try to do a 365 photo project this year. I just want to cut back – photos end up feeling like an obligation, and I want to let photos be something that call me to take them, not something I force, you know? I’m sure I’ll still take a ton of photos because that’s how I roll, but every day? Probably not. I’ve also joined with a group of crafty folks (started by my friend Annika) who are hoping to make their own clothing this year. So I do have some goals along those lines, though (as I said above), these are low-key, gentle goals. Intentions, we’ll call them. No pressure. I’m hoping to sew a few 100 Acts of Sewing Dress #1 dresses for myself, knit some more shawls/cowls/etc to add interest (and warmth!) to my outfits this winter, and hopefully, finish a few cardigans for myself (specifically: my Lopi Affection in blues and greens, a Little Waves cardigan in purple, and a grown-up Elle Melle in greys; maybe a Stripes! cardigan, also). I also want to make some clothes for M – some pinafores, and loose legging/sweatpants (she likes things to be loose around her bottom and legs, but banded/elasticized at the ankle, and it’s hard to find that except at places like Hanna Andersson and while their clothes are nice, they are also EXPENSIVE). I have been toying with the idea of releasing a series of parent-child knitting patterns from the collection I’ve been slowly developing since M was born. I haven’t worked out how I’d do that, yet, but it would include things like Stripes! cardigans, Garter Rib cardigans, the Sullivan sweater I knit for Wool People (plus a not-yet-knit kid’s tunic based on that design), a re-release of Vahtralehed along with a kid version, maybe a pattern for that Cobbler sweater I knit for M last year (and a grown-up version)…gosh, I basically have a book worth right there, don’t I? We’ll see what happens with that.