On January 3rd, we hopped back on Amtrak to head back to Chicago, to catch our flight back to Ohio, where we’d left our car. This Amtrak ride was even better than the first one, because this time, it was daylight during the entire ride! M loved watching the bluffs and river go by out the window – it is SUCH a gorgeous part of the country! 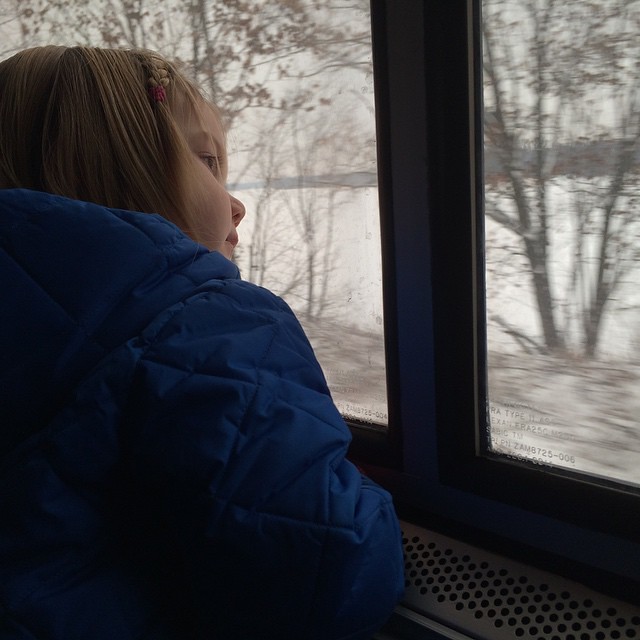 Another benefit to Amtrak (over plane travel) is the copious amount of legroom, which M definitely enjoyed: 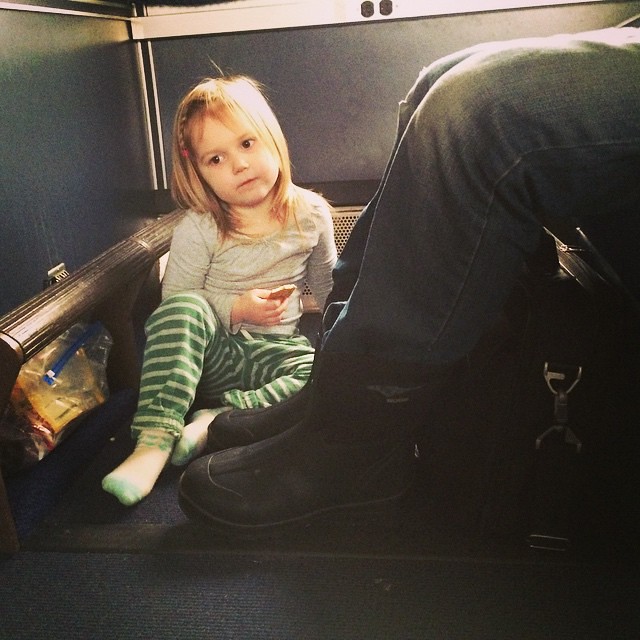 We did some “collaborative monster drawing” on the trip, too. The way it works is that M doodles the general outline, and then tells me what features to add to it. We end up with such cute creatures! 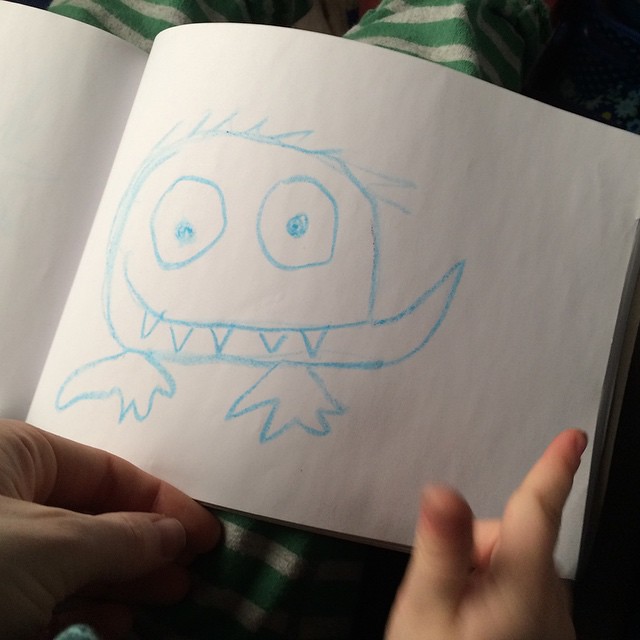 M was SUCH a wiggle-bean on this trip! 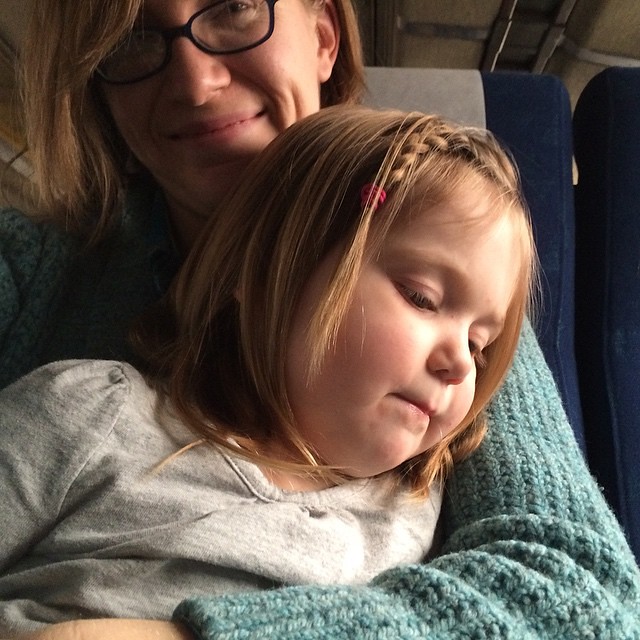 But she did eventually zonk out: 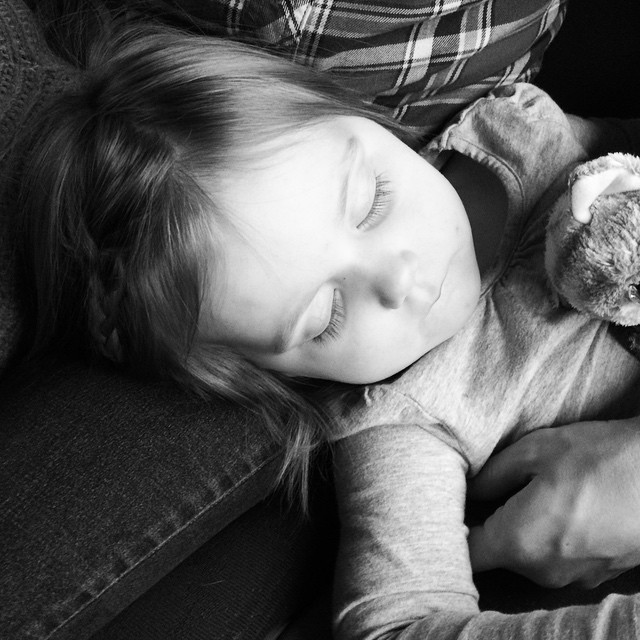 It was a dreary day in Chicago when we arrived – on time! We’d deliberately chosen the last Southwest flight of the day, because you kind of have to assume that Amtrak will be late and plan accordingly (unless you overnight in Chicago), so we knew we’d have a long wait if the train actually was on time. 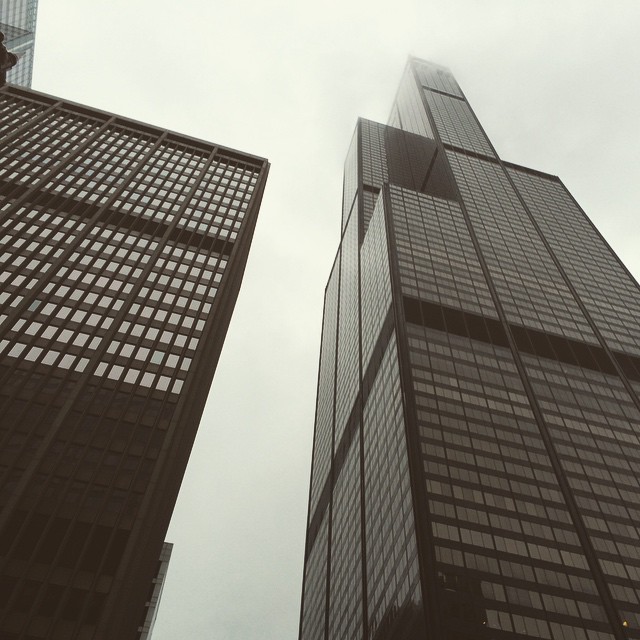 We’d hoped to kill time by eating at one of the M-friendly places we knew were on the way between Union Station and the Orange Line stop (or by eating in Union Station), but weirdly, all of the veggie-friendly sandwich-shop type places (e.g. Au Bon Pain, Panera) were closed. At 3:30pm on Saturday. WHY?? Isn’t that when a lot of people eat out? So…we trucked along to Midway, where M enjoyed a very overpriced yogurt parfait (and we had some crappy pizza). 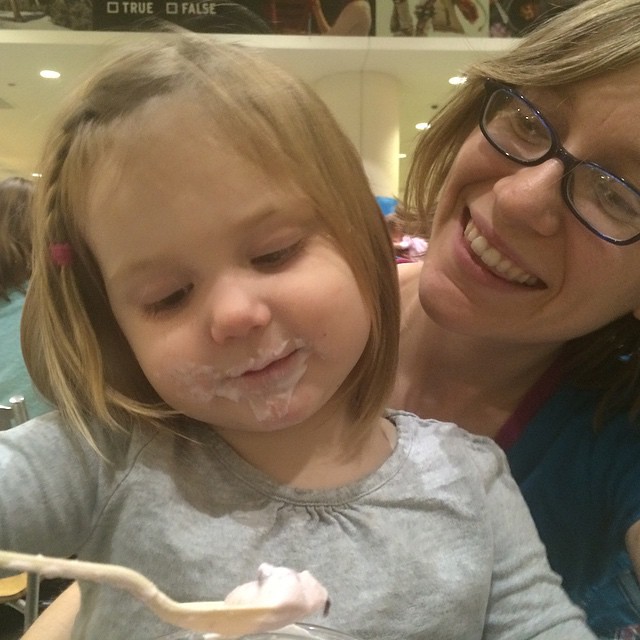 And then our flight got delayed. Repeatedly. It eventually stopped when it was delayed until 11:10pm. So…we had a LOT of time to kill in the airport, with a very hyper, overtired 3 year old. This was…exhausting. She made snow angels… 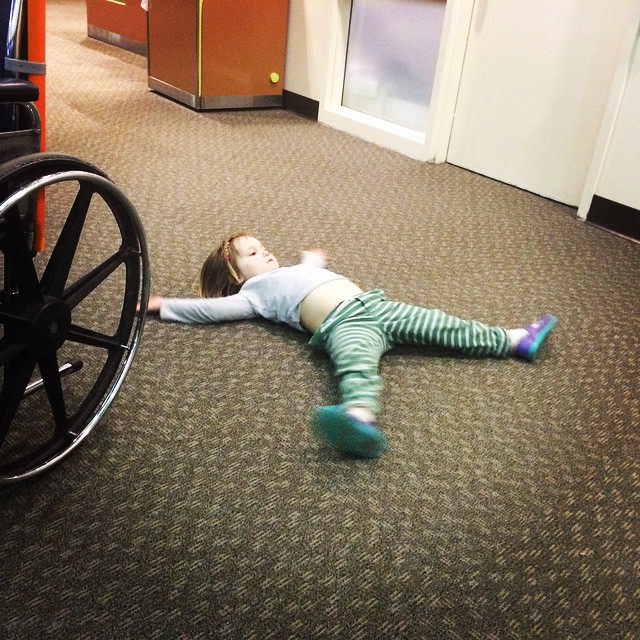 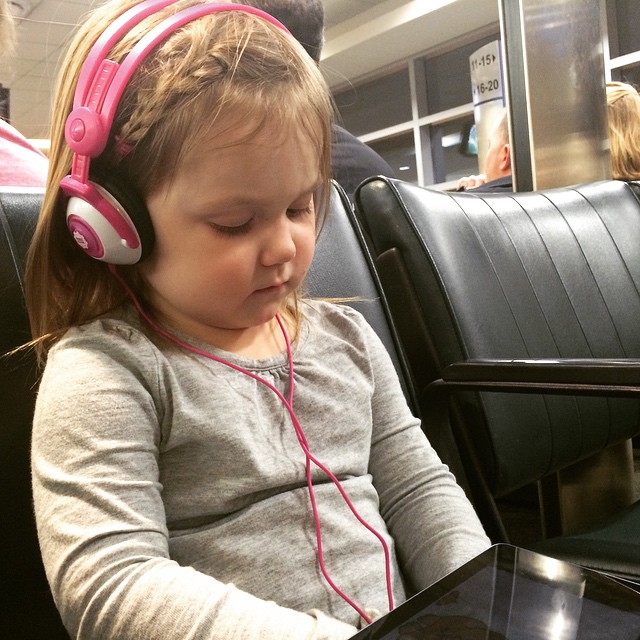 …and ran up and down the moving walkways: 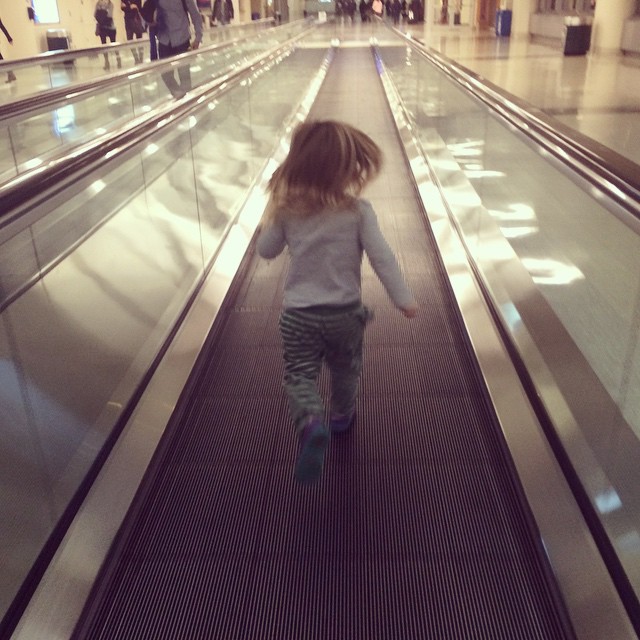 Gosh, did she ever love doing that. Our gate got switched to one all the way across the airport, so we had to get the three of us and all our bags there, and between that and all of the moving walkway-running, according to my iPhone, I covered over 3 miles with M just in Midway airport. TIRED! And then we didn’t get to my in-law’s house until 2am. We’d been considering driving right back to NY the next morning (despite our original plan to stay one more day), but decided to stick to the original plan because of how late we got in that night. This turned out to be a BIG MISTAKE. (And not just because my in-laws were out with friends the vast majority of the day, so we didn’t even really see them.)

So, we drove home on the 5th. It started out lovely enough…sunny, but very cold. 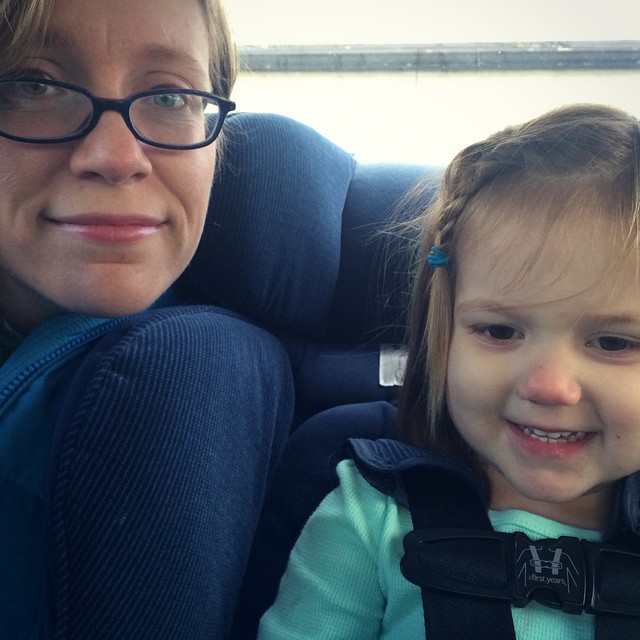 M did some in-seat yoga: 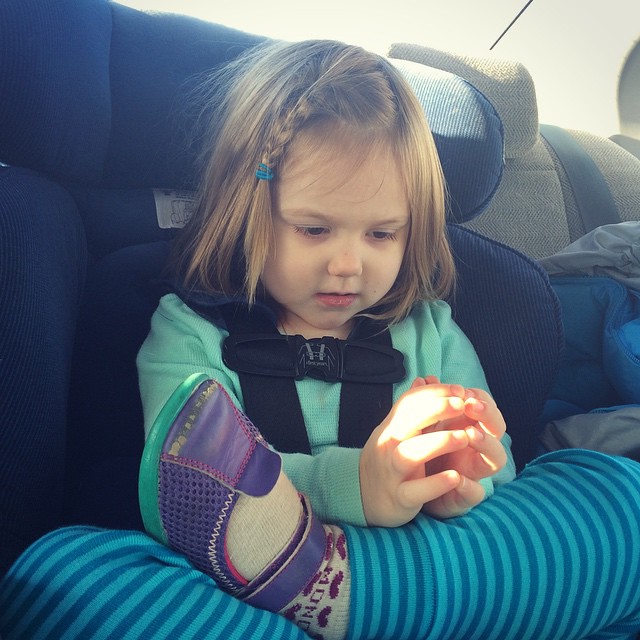 And then…our car died. In the middle of I-71, in between Columbus and Cleveland, in a section where there was minimal shoulder, which we barely got into anyway, so we spent the next hour having semis roaring past inches from the side of our car, as we got colder, and colder, and colder, waiting for AAA to pick up the phone and get us towed. This is apparently the face I make when I am very tired, very cold, and also rather terrified of being sideswiped by an inattentive driver: 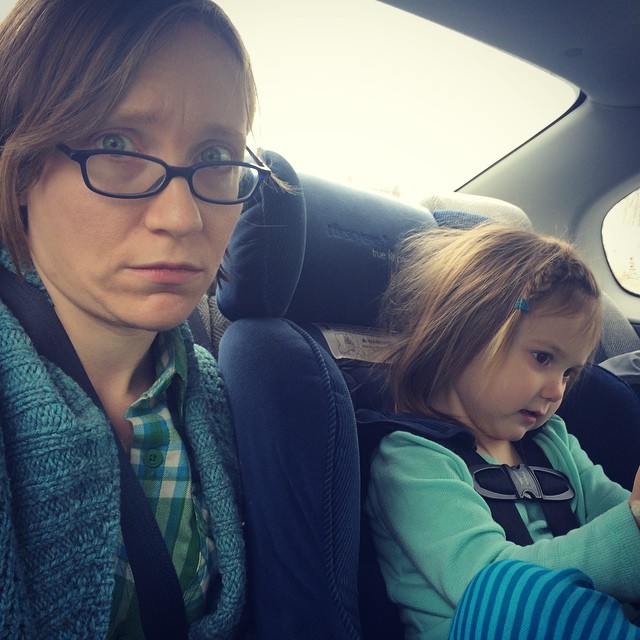 It turned out to be our alternator, which was fortunately a relatively quick fix and not horrendously expensive (not cheap, either, though…goodness, this trip ended up costing a fortune!)…but we did lose 4 hours, which turned out to be critical, because it put us getting into the Erie area just as it was getting dark, and as a lake-effect snowstorm struck. 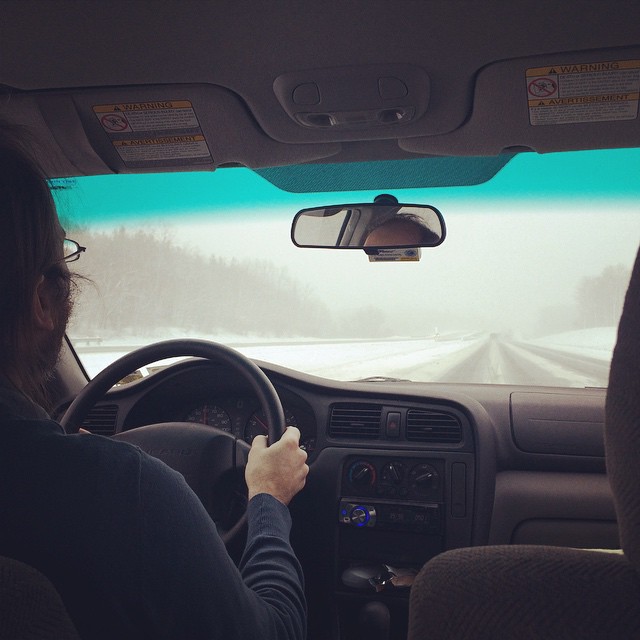 It just kept getting worse, and worse, and worse, until we were driving essentially blind. This was the most terrifying driving we have EVER done (A was driving, and my job was to keep him from panicking and help him navigate – while dealing with a very cranky 3 year old backseat partner) and I never ever EVER want to do it again. Whiteout conditions, in the dark, with semis almost hitting us several times as we struggled to even see our lane. Our windshield kept icing up (despite us cooking ourselves with the heat blasting) because of the VERY cold temperatures – which are kind of bizarre in combination with snow. Because I was taking part in the “#adayinthelifephotochallenge” on Instagram/Twitter, my friends could see that I was getting more and more terrified as we went off into the shoulder repeatedly for de-icing/de-panicking/just because we ended up there (like when I took this screenshot of our location on Google Maps in lieu of an hourly photo): 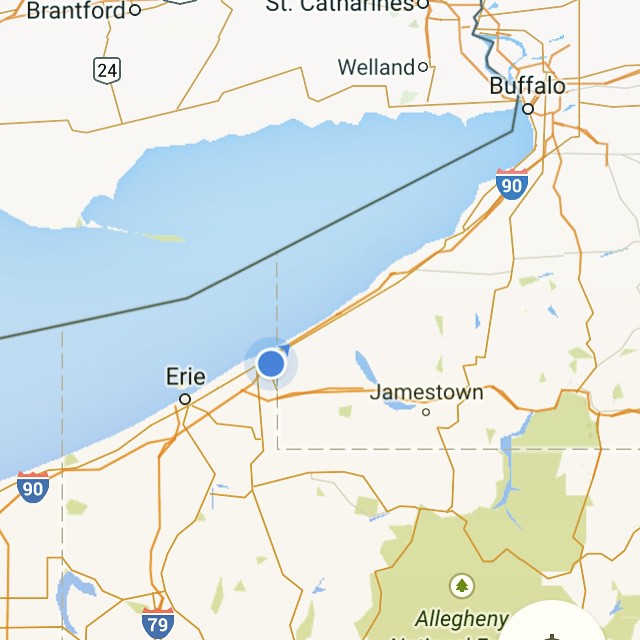 I am so very grateful to my friend Annika, who saw my posts about being terrified, and hooked us up with her sister in Jamestown, who very kindly fed us pizza and put us up for the night (thank you thank you thank you!). I do not even know what we would’ve done if we’d had to stay on I-90 but given how many extremely close calls we had with semis, I suspect we would’ve been in a ditch or worse. We drove home the next morning, and while we were absolutely wrung out at that point, I am just so grateful. The community of knitters online is so wonderful and we really take care of each other. I hope I can pay this forward at some point. (Other things for which I am intensely grateful: rumble strips, which were the only thing kindasorta keeping us on the road, at least when we could feel them through the accumulating snow, and Google Maps on my phone, which helped me help A know which way the road was bending when we were driving nearly blind.)

It’s good to be home. We’d already been leaning towards spending our next winter break here at home, and now we’re sure of it. We will not travel AT ALL next winter – not for Thanksgiving, and not for the Winter holidays. I think we’ll probably make winter travel an every-other-year sort of thing, because it’s just not how I want to spend every single winter break that I have. The time with family was lovely, but the travel itself left me utterly drained instead of recharged, which isn’t how I hoped to start off 2015. (On the plus side, I do not seem to have pneumonia this year, so I’m off to a better start than 2014! That’s sort of a low bar though, eh?)