On the 27th, we got up nice and early and headed to the airport for the first leg of our trip to Minnesota to visit my family. M was a very helpful little traveler (at first, at least!), and even carried her own luggage! 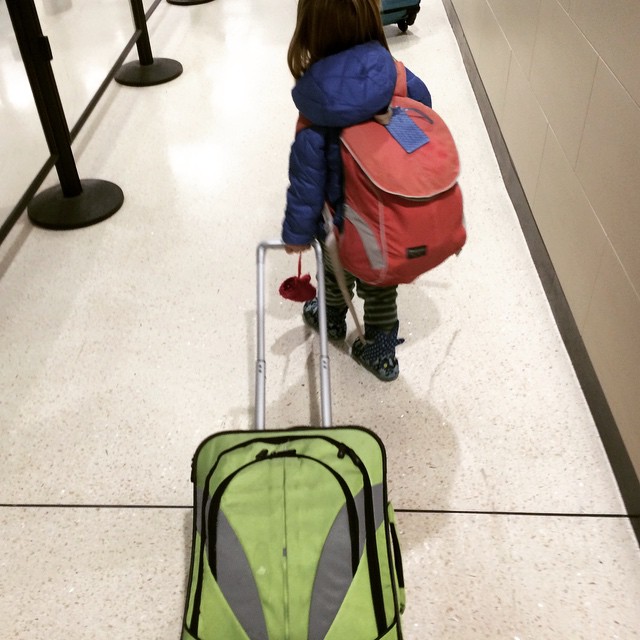 The flight was pretty uneventful, thankfully! 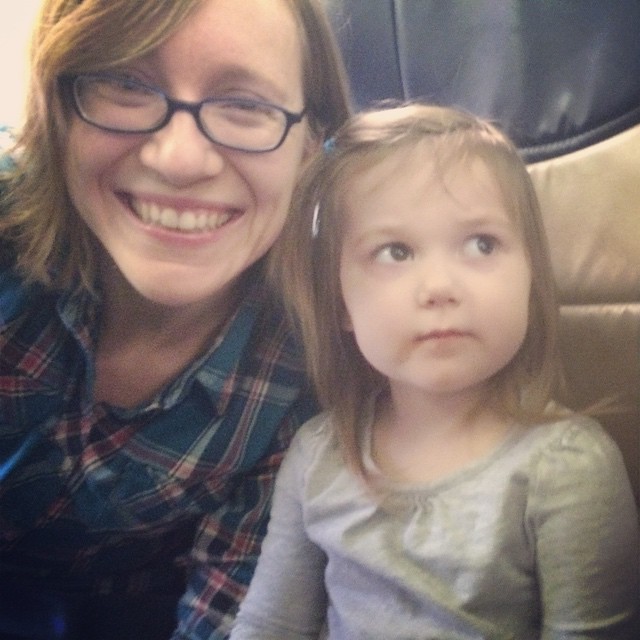 After that, we took the Orange Line from Midway to Union Station, where we had a few hours to kill waiting for our train. We had storytime… 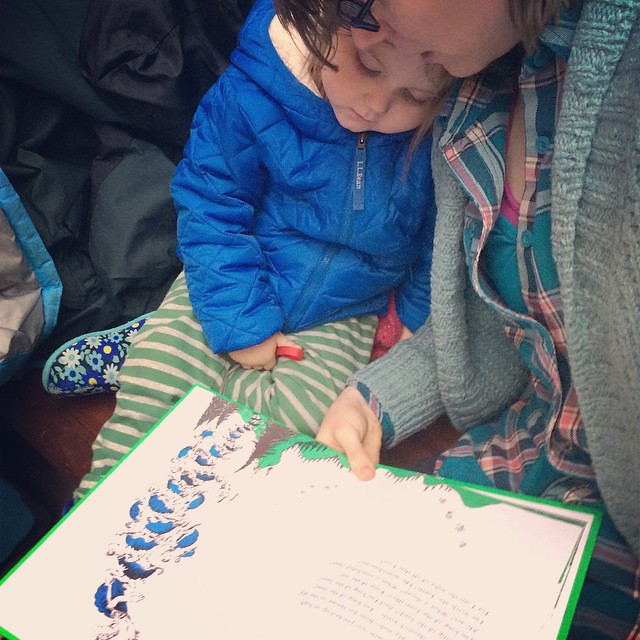 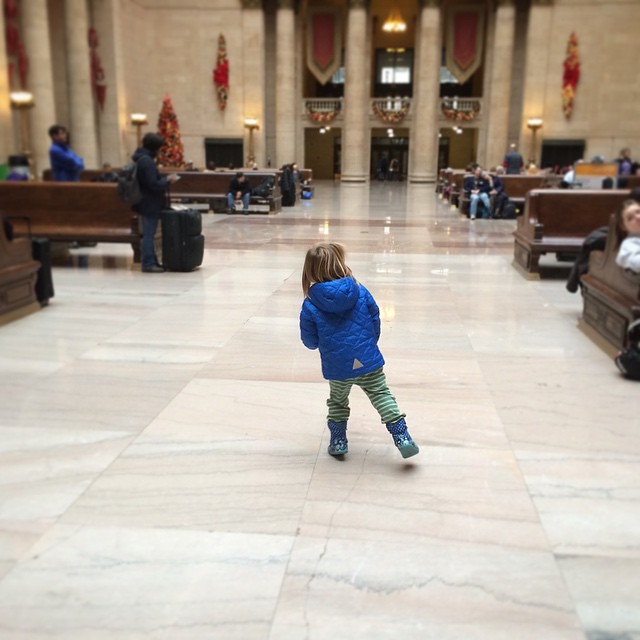 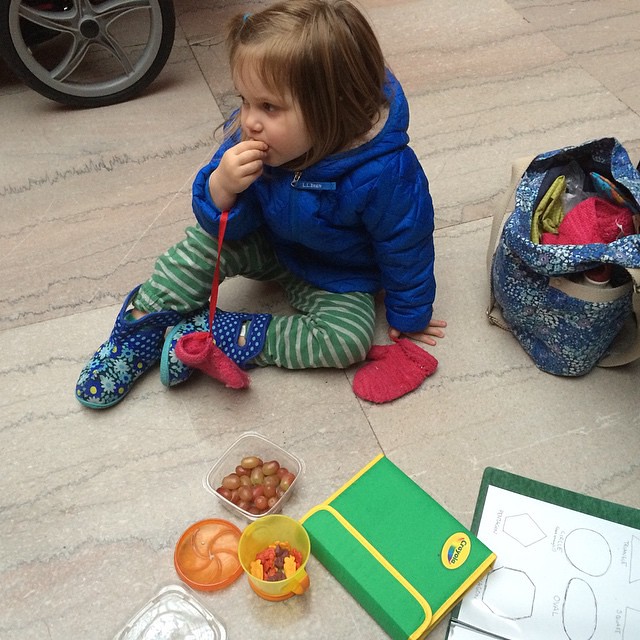 Next up was the train ride, which M really loved! 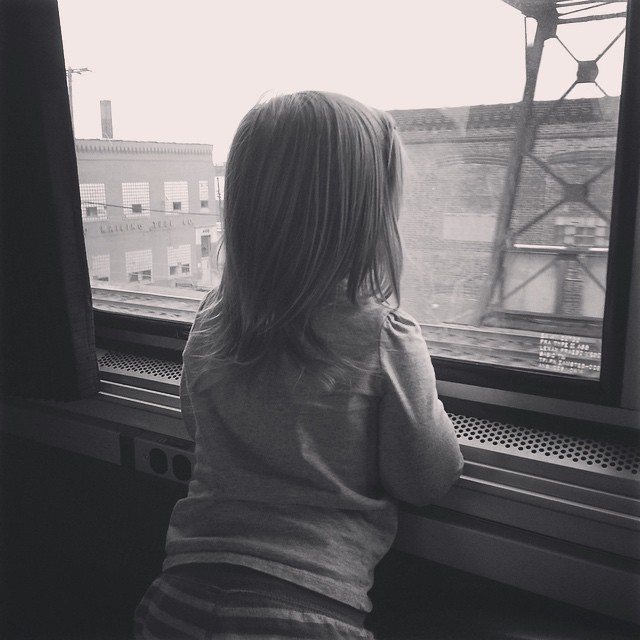 We had so much fun looking out the window together! 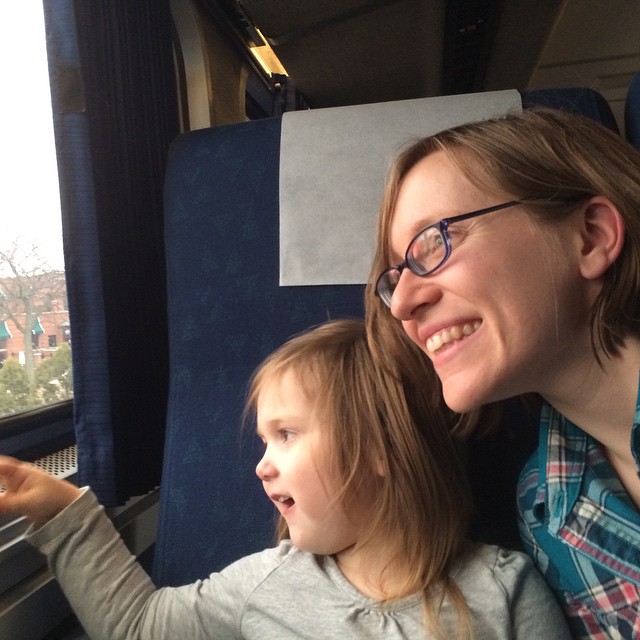 She also loved having the freedom to take walks…the train is certainly slower than flying, but so much more family-friendly! (And really, given our destination, it ISN’T slower than flying, since my parents live over 2 hours from the airport we’d need to fly into).

I was worried on our way up, because it had been so strangely warm, and one of the things M was *really* excited about was the prospect of learning to use snowshoes with grandpa! But fortunately (for us, at least), they did get some snow the day before we arrived, so the next day, we went snowshoeing! 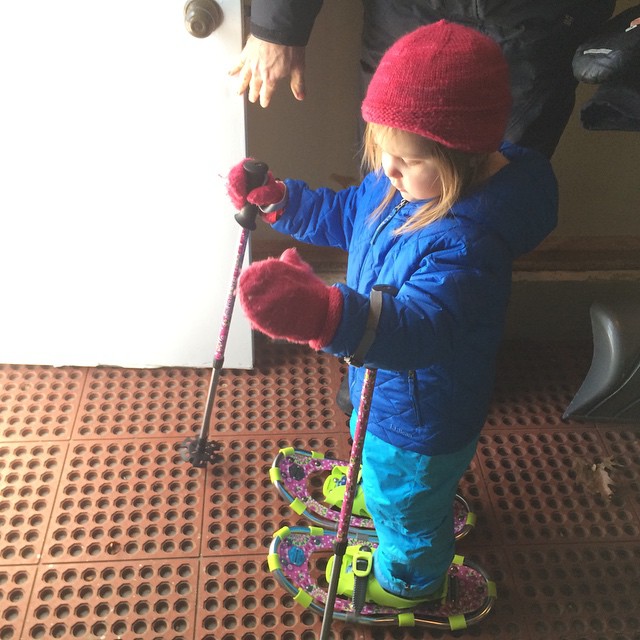 She was very excited to take her first snowshoe steps! 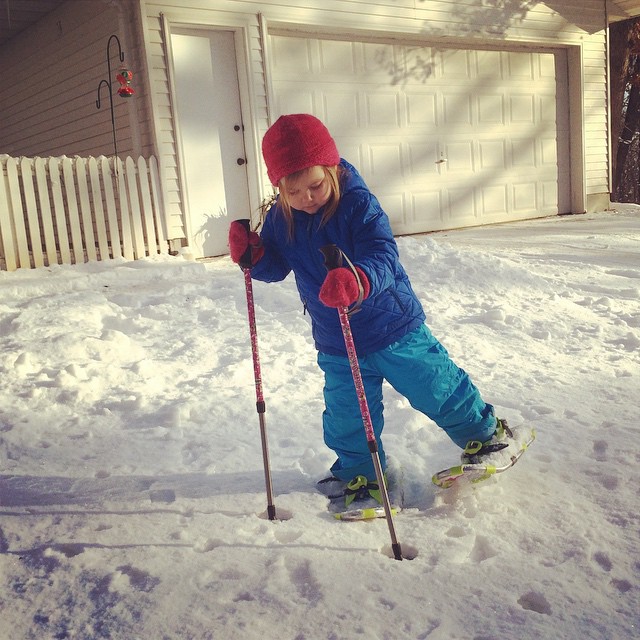 And she had a lot of fun with her snowshoe instructor (grandpa!) 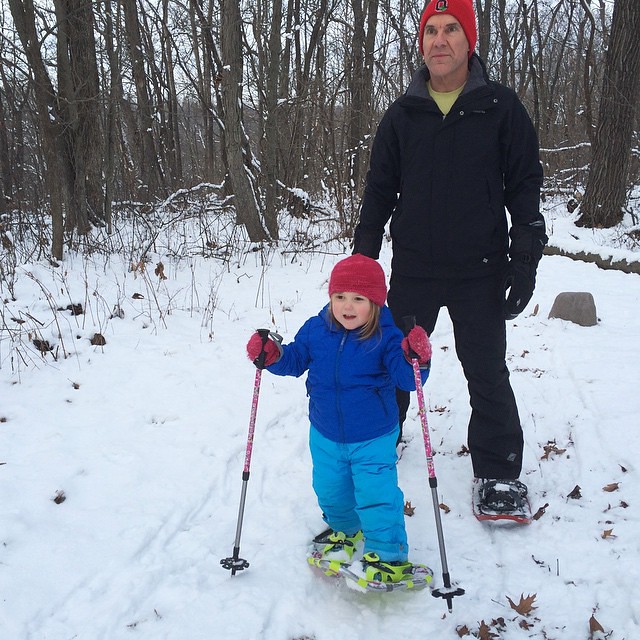 The next day, we made homemade peanut butter together. M *loves* to help in the kitchen (and grandma and grandpa even have a Learning Tower!), and she was especially proud to be able to push the correct buttons on the food processor. 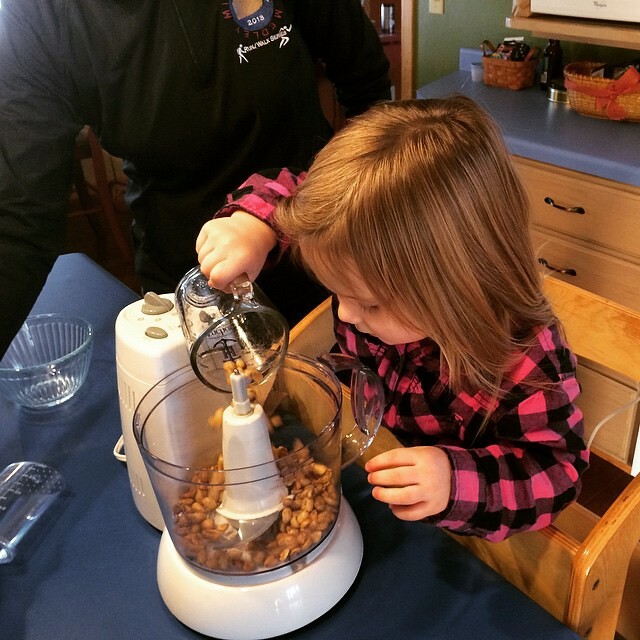 Grandma and grandpa also have a fireplace, so we got to spend some warm cuddly time next to it. 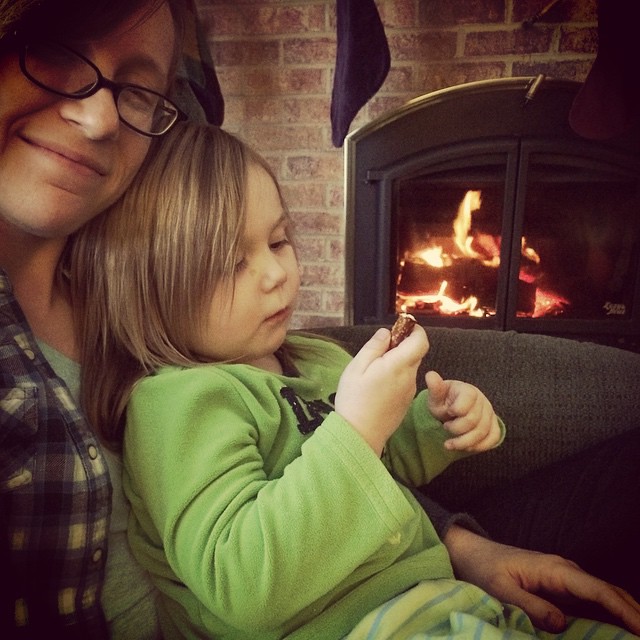 New Year’s Eve was pretty uneventful, but we did go down to the library (gosh, I miss this library! I have so many fond memories here), where M got to work with letter-tracing: 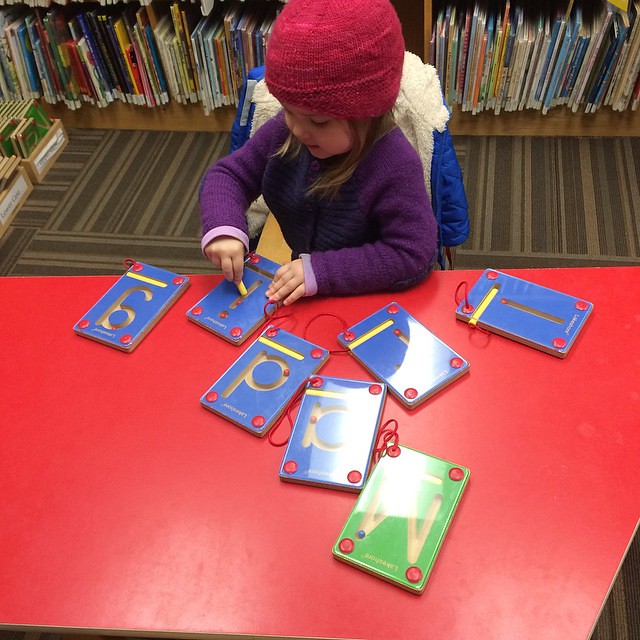 They also had a table still set up (from a party at noon, which we didn’t go to) for kids to make and take their own noisemakers to celebrate! 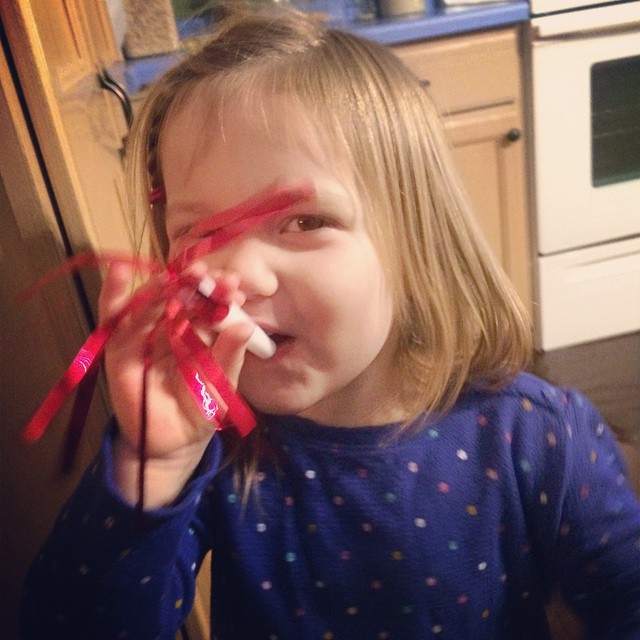 But really, New Years Eve when you’re 3 is just another day :)

On New Years Day, we drove up to Eau Claire, Wisconsin, to visit my brother and his family. Oddly, I don’t seem to have taken any photos while we were there, but I do have a picture of the hat and mitten set I knit for E: 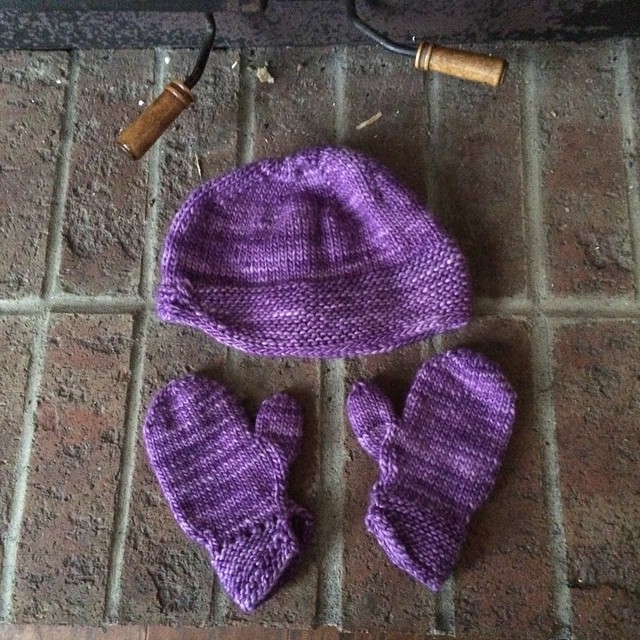 The Wee Envelope sweater from a few posts back is for her sister-to-be (by sometime in early February). I also managed to start a knitting project for myself – Frisson, in an ages-old bamboo-blend sock yarn from my stash. I’m really enjoying it so far! 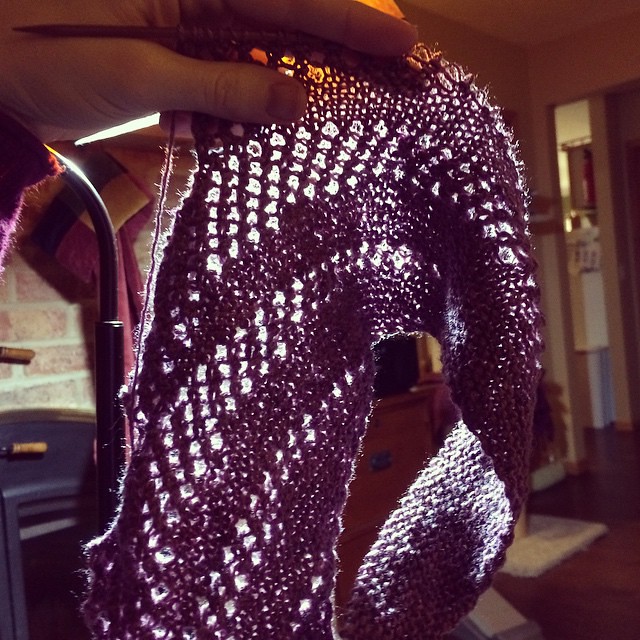 We only spent one night in Eau Claire. On the 3rd, we started our return trip, which I’ll save for my next post…it was quite the Odyssey!