And it isn’t the Bronntanas hat I mentioned in a previous post – I actually ended up ripping that out, because the stitch pattern just didn’t look good in the yarn I was using. No, instead, I made myself a “grown-up” version of the hat I’ve been making for M these last couple of years: 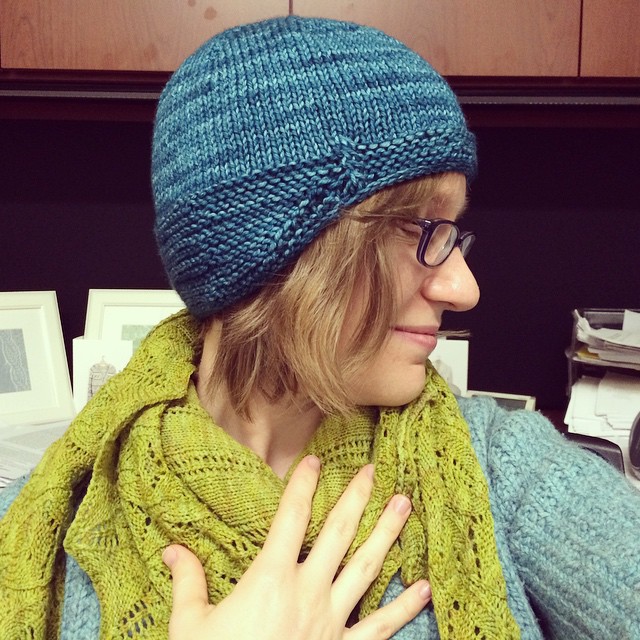 The yarn is Malabrigo Rios, and the pattern is simply an upsized version of the same “recipe” I use for M’s hat. I finished it on Friday, knitting away during the break between my two recitation sections: 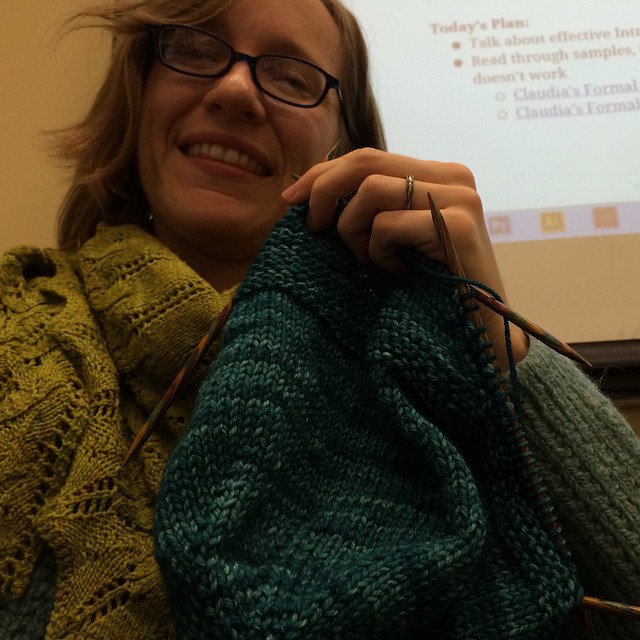 I still haven’t taken “real” FO shots of the hat, but I did snap some photos in my office that afternoon: 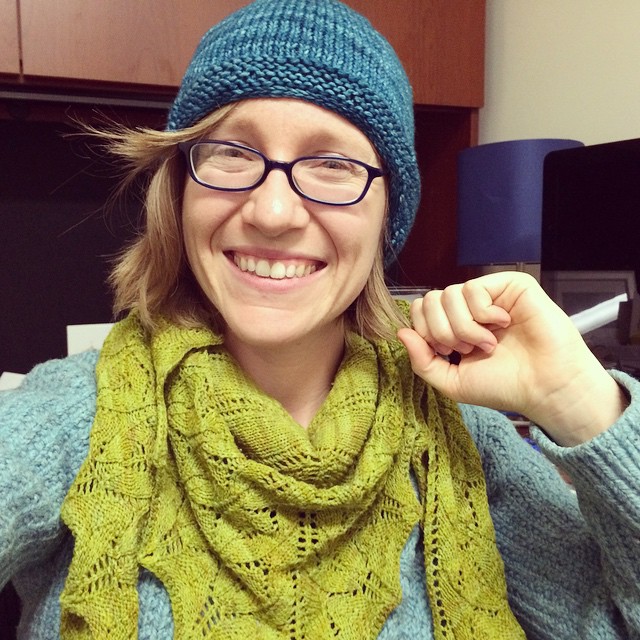 And one with my girl in her matching hat: 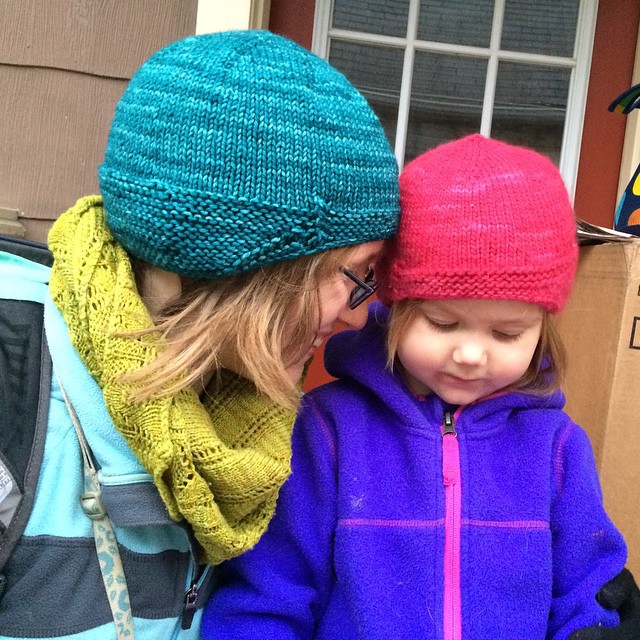 I do so love having matching knitwear :) Having worn the hat for a few days now, I’ve decided it’s actually a bit too big (I wasn’t exactly being careful with my measurements and was just kind of winging it – I obviously would pay more attention if I were to write up a pattern!). If I knit another one (and I almost certainly will), I’ll aim a little smaller/shorter. But it’s still quite nice to have a hat again now that the chilly weather is returning.

I fully intend to write up a pattern/recipe for M’s hat and mittens, and I may as well write one up for a grown-up version as well. So, I’ll probably knit myself a pair of mittens like M’s, and another hat, to test out the up-sizing. But then I have some other decisions to make:

1. Do I release everything (kid’s hat, kid’s mittens, grown-up hat, grown-up mittens) as a set? I’m a lot closer to being ready to release the kid’s hat and mitten patterns, and they’re such quick knits that I think it’d be cool to get the pattern out before the end of November (if possible) as a “last minute Holiday gift” sort of thing. But I don’t think I can do that if I try to release all 4 things at once.

1b. If I don’t release kid and grownup sizes together, do I still release the hat + mittens in each size as a set, or individually?

2. What the heck do I name them? I’m leaning toward something curve-oriented (“curvature”, “curvilinear”) because the curving lines of the garter stitch are really the design feature in both hat and mittens. But then I’m also wondering if I could give them a name associated with something about the drive to Rhinebeck, since the hat was born (and knit, and reknit, and reknit) on that drive. Taconic? Hudson? I don’t know!

2b. How do I handle naming the kid and grown-up versions? If I were releasing the grown-up version first, it’d make sense to just name the kid version “wee X” or “little X” or “X, jr” or “babyX” or any number of things…but if the kid’s version is first, then I don’t know what I’d call the grown-up version. “grown-up X” sounds goofy, I think. You’d think that as a linguist, I’d be good at naming things…but I’m not. (With the exception of my kid, whose name is perfect, of course! Though gosh, we’re lucky she was a girl, because our list of boy names was…not perfect, I’ll say that much.)

3. Do I want to write them up as a pattern, or a “recipe”, or both? I’m leaning toward both. Well, in all honesty, I’m leaning towards “recipe” (by which I mean I’d give a tutorial with the recipe and math for figuring out how to make the hat and mittens the right size for any particular recipient) rather than “pattern” (by which I mean having just a few “standard” sizes that I’ve worked out in full), but I imagine most folks would like a pattern. I did both for my Stripes! pattern and I think people liked that, too? I can’t help it, I’m a teacher at heart, and writing patterns without sharing the process just goes against everything in me!

See, this is why I’d never make it as a “real” designer. I dither way too much!