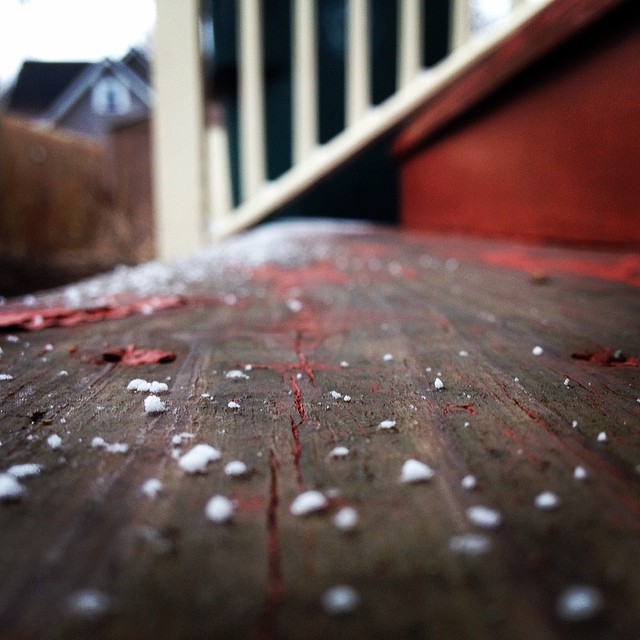 Snow (or rather, “ice pellets”) on our steps. It was 80 yesterday. Go home, April, you’re drunk, basically.

This cold that M gave me is utterly kicking my ass, and I had a busy teaching day. My two normal classes, plus 3 conferences with students, which meant I had to be “on” (and talking, which is brutal given the current state of my throat/respiratory system) for a good 5 hours straight today. I’m just utterly beat now.

We were supposed to go to our friend’s defense party tonight, but first I had to back out because I’m just not feeling well. A and M were still going to go, but then M puked in the car on their way there. So instead of the quiet restful evening I was hoping for, we were frantically trying to clean puke off of everything. Including her beloved Alligator the alligator. Hoping it was just a one-off thing because she ate too much/had a sour tummy, because seriously, I just cannot deal with the idea of having stomach bug #3 for the year when it’s only mid-April.

I want a do-over. And for one of these times when I’m feeling awful, to just be able to REST. I just want to catch a break, sometime. This has just been the most stupid-hard semester ever.