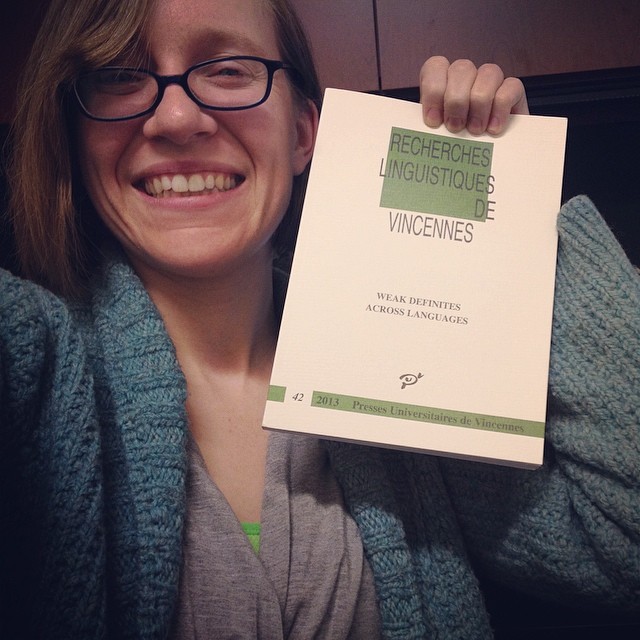 This showed up in my mailbox today. I’m a coauthor on one of the papers in it – it’s a French journal, but all of the articles are in English. It’s a special issue on one of the topics I’ve been studying (“Weak Definites” – if anyone is actually curious about them I’d be happy to blather about it!). Pretty cool.

Today was a weird day. Mostly good, but I’m so tired that I kept randomly crying, because that’s a thing that I do when I’m tired. C’est la vie.

I decided to go to my lab’s regular meeting today, which I usually don’t do (it’s usually class-prep time for me), and it turned out to be a great decision. I’ve been feeling really disconnected from the folks in my lab, because I’m never in my department anymore now that my office is in the Writing Program, and it was good to see everyone again, and participate in a discussion about a study one of them is designing. But even better than that was the fact that one of my advisor’s former students dropped by to chat with us. She’d been in a tenure-track job but left it for work-life balance reasons, and was just so honest and encouraging with all of us, and talking to her made me feel so much better about the trajectory my own academic career is taking, like it isn’t anything to be ashamed of. (If you’re in academia, you probably know how intense the inculturation about this is – the idea that if you do anything other than a TT job at an R1 institution, you are a failure who should be shunned. Obviously I don’t think that, but it’s REALLY hard to shake feeling that you should be ashamed of yourself if you deviate from “the path”.)

The rest of the day, I attempted to give feedback on student papers (I’m really slow at this when I’m severely sleep-deprived), and then I went to a “Student-Faculty” dinner for my department (I count as “faculty” for the purpose of the dinner because I’m an instructor for one of our major courses) and chatted with undergrads and basically got to play the same role for them that my advisor’s former student had played for me in the morning – honest and encouraging.